Stop buying breakable phones: The new rugged phones are tough and hot. Let me guess: You're still carrying a phone you're terrified of dropping. 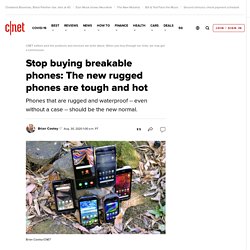 So you cocoon it in some add-on case, maybe with a finger loop for extra safety, and end up with a package that makes a mockery of your "thin" phone. If so, it's time to consider one of the new breed of rugged phones, which range from slim to attractively chunky. They all have built-in drop-and-dunk resistance, no case needed. And they typically offer a slew of useful features no iPhone or Samsung Galaxy phone can replicate. T-Mobile Will Soon Offer Home Internet & $15 a Month Wireless Phone Plans.

In March 2019, T-Mobile announced that they have started to test home Internet services using LTE. 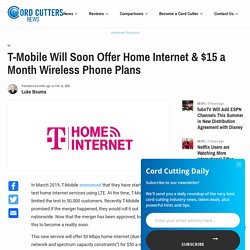 At the time, T-Mobile limited the test to 50,000 customers. Recently T-Mobile promised if the merger happened, they would roll it out nationwide. Now that the merger has been approved, look for this to become a reality soon. Bus Route Information. System Map HTML Route Info (link is external) (click on schedules, enter the route number, and then select show all stops) 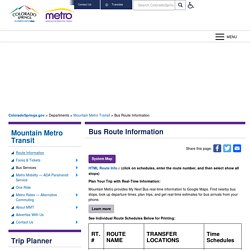 Android secret: The hidden way to speed up your smartphone REVEALED. Whether you’ve got an ageing Android smartphone, a shiny new top-tier flagship or anything else in-between, there’s a very simple way to give your device a speed boost that’s immediately noticeable. 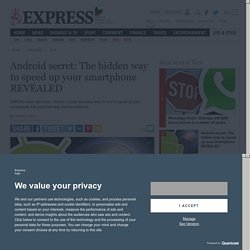 Buried deep within your phone’s settings menu is the option to reduce device animations, that’ll make every app you open and button you press feel snappier and more responsive overall. To do this, you’ll first need to enable developer options on your smartphone – these settings are unlocked by tapping on your phone’s build number multiple times. Finding your phone’s build number is easy. Simply head to Settings > About phone then scroll right to the bottom and tap on the aptly titled “build number” tab. Once developer settings are unlocked, head into the secret menu and scroll just over half way down the page where toggles related to animations are available. Bomba Estéreo. Google just launched several new apps to help you spend less time on your phone.

How would you feel if your phone’s wallpaper displayed a running tally of the number of times you unlock your device every day? 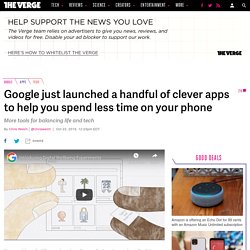 Ashamed? Indifferent? If you’ve got an Android phone, Google is now giving you that option — plus other new initiatives that are part of the company’s ongoing Digital Wellbeing effort. As noted by Android Police, Google has released several new Digital Wellbeing “experiments” in the Play Store. The one I mentioned above is called Unlock Clock. Another experiment, Post Box, is a rethinking of how we receive notifications. 8 mobile apps that protect your phone's privacy, because no, you're not doing enough. You're using a PIN to lock your phone, and you're avoiding suspicious emails and apps, right? 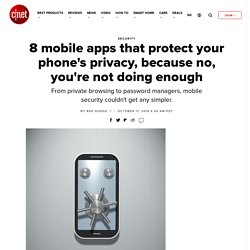 That's a good start to protecting your privacy on your smartphone. But if you're concerned about the rising tide of mobile phone hacks and massive data breaches in the news, there's more you can do to lock down your most personal piece of technology. From browsing under the radar to remotely turning your stolen phone into a brick, here are some of our favorite apps devoted to protecting your privacy on both iOS and Android. Private browsing Whether you're using iOS or Android, the easiest privacy boost you can give yourself is with a virtual private network. What does the mobile network state mean? Only two Android brands score reasonably well in analysis of security updates. An analysis of security updates for different smartphone brands reveals the safest brands to buy, and it doesn’t make for great reading. 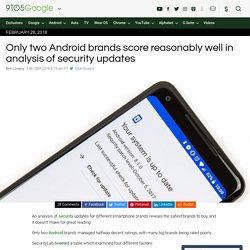 Only two Android brands managed halfway decent ratings, with many big brands being rated poorly … NordVPN. Only two Android brands score reasonably well in analysis of security updates. Similar vectors to 51269531 Multiplication Table on White Background. Vector. What is your review of Crypterium ICO? - Updated. Right Now in Quizzes. How to Build Your Own App If You Don't Know How to Code. Spam calls: how to stop the robots from calling your iPhone or Android. Update May 10th 9:30AM ET: This article was originally published on March 6, 2018 and has been updated to include video. 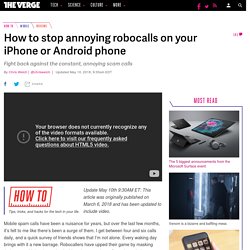 Mobile spam calls have been a nuisance for years, but over the last few months, it’s felt to me like there’s been a surge of them. I get between four and six calls daily, and a quick survey of friends shows that I’m not alone. Every waking day brings with it a new barrage. Robocallers have upped their game by masking their spam with local, genuine-looking phone numbers. Sometimes their nonsense is amusing — like when you get a threatening voicemail about your impending arrest over owed back taxes — but the vast majority of the time, it’s an unwelcome distraction.

Robocalls have become so infuriating that the Federal Trade Commission received over 375,000 complaints about them every month last year. Japanese Are Polishing Dirt Balls To Perfection, And The Result Will Blow You Away. The making of ‘dorodango‘ is a traditional pastime for Japanese schoolchildren, that has grown into an art form in its own right. 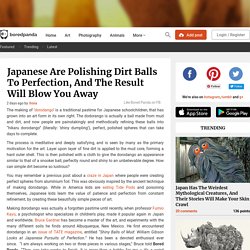 The dodorango is actually a ball made from mud and dirt, and now people are painstakingly and methodically refining these balls into “hikaru dorodango” (literally: ‘shiny dumpling’), perfect, polished spheres that can take days to complete. Show Full Text The process is meditative and deeply satisfying, and is seen by many as the primary motivation for the art. Layer upon layer of fine dirt is applied to the mud core, forming a hard outer shell. Showbox Apk Download : March 2019 V5.24 Latest App for Android. Showbox Apk Download: Are you interested in watching the popular TV shows then you must download Showbox app 2019 version. 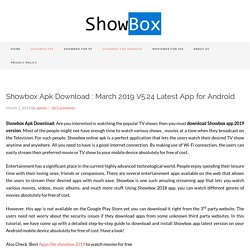 Most of the people might not have enough time to watch various shows , movies at a time when they broadcast on the Television. For such people, Showbox online apk is a perfect application that lets the users watch their desired TV show anytime and anywhere. All you need to have is a good internet connection. By making use of Wi-Fi connection, the users can easily stream their preferred movie or TV show to your mobile device absolutely for free of cost. Entertainment has a significant place in the current highly advanced technological world. However, this app is not available on the Google Play Store yet you can download it right from the 3rd party website.

Also Check :Best Apps like showbox 2019 to watch movies for free Showbox App Features : Memit Alternatives and Similar Apps and Websites. Memit is a social knowledge management service (both web and mobile) that is built to make people smarter based on the content they collect, process and publish. It is the easiest way to collect and share your articles, pictures, reports, news stories and videos for you, your team and your business. This unique one-click application works as a viral social network across on- and offline media and cultivates organized, knowledgeable and influential users.

For knowledge professionals LinkedIn is connect-ability, but Memit is the content-ability. More Info » Home - BBC Earth. Welcome to Peejamas! NetFlix Streaming by Alternate Genres (Main List) Netflix Has Secret Codes for Christmas Movies! By now, you may have heard that Netflix has secret codes to unlock certain genres of movies and television shows on their streaming service. With the holidays coming up, we did some digging and found a list of their secret codes to unlock all sorts of Christmas and holiday films for you to enjoy!

Netflix has divided Christmas films in a bunch of different genres including “Romantic Christmas Films,” “Family-friendly Christmas Films,” “British Christmas Children & Family Films,” and more. In order to access these genres, all you have to do is put “ into your browser! Click inside to see the full list of holiday movie codes on Netflix… Netflix Christmas Movie Codes. Is Sprint Total Equipment Protection Worth the Cost?

When it comes to your cell phone, do you have some type of insurance or equipment protection plan? If you do, you’re definitely not alone! With as much as phones get dropped, wet, cracked, sat on, or just plain lost, you almost can’t afford NOT to have some type of coverage. There’s nothing more annoying than having a phone that’s not working 100%. And with as much as they’re charging currently for an iPhone, at first glance, it seems almost crazy not to have some sort of protection for your device. The first time we got my wife her iPhone, we added a coverage plan to her account, and I believe at the time it was only an extra $7 per month. Lately, however, things are different; a lot different.

Komando. Fieldguide.gizmodo. Digitaltrends. Secret settings hidden in your Android phone will make it feel twice as fast – BGR. Modern Android phones are so much faster and smoother than they used to be even a few short years ago. Of course, speed on a smartphone is just like battery life: you can never have enough. The latest-generation Qualcomm Snapdragon processor has been combined with extra RAM in 2018 Android flagship phones to create the smoothest and most powerful Android experience to date. In fact, technology has progressed so much that a couple of recent Android flagship phones have been found to be even faster than current-generation iPhone models running iOS 11. That’s right, the Samsung Galaxy S9 and OnePlus 6 both actually managed to beat the iPhone X in real-life speed tests on YouTube.

Phones like the OnePlus 6, Samsung’s latest flagships, the LG G7 ThinQ, and the new HTC U12+ are all wonderfully fast right out of the box. Wu-Tang Name Generator. Simple Tips For Better Living. Play Newsstand. 37 Best Legit Websites to Get Free Stuff. Have I been pwned? Pwned Passwords. Password reuse and credential stuffing Password reuse is normal. It's extremely risky, but it's so common because it's easy and people aren't aware of the potential impact. Attacks such as credential stuffing take advantage of reused credentials by automating login attempts against systems using known emails and password pairs. NIST's guidance: check passwords against those obtained from previous data breaches The Pwned Passwords service was created in August 2017 after NIST released guidance specifically recommending that user-provided passwords be checked against existing data breaches. Informed Delivery. TSD - Frugal Living, Savings, Credit Cards, CD Rates, Investing.

Chime vs Simple: A Review of Millennial Banking Options. FAT MASCARA. How to Build Your Own App If You Don't Know How to Code. All Quizzes - Offbeat. Ad. Dog Age Chart: How to Convert Your Dog's Age into Human Years. Biography, Albums, Streaming Links. Everbridge.mass emrgncy notification. Right Now in Quizzes. What is your review of Crypterium ICO? - Updated. Gifs that go "bump" in the dark. Facebook launches a version of Messenger for young children. Facebook today announced a new version of its Messenger chat app designed for children ages six to 12.

Called Messenger Kids, the new app does not require a Facebook account — due to federal law, users under the age of 13 cannot legally sign up for Facebook. Rather, parents are able to manage a child’s Messenger Kids app from their Facebook account, controlling which friends and family members the child is able to contact. Facebook is launching the app today in preview with a limited rollout on iOS. MetaMask. I'm Playing The Animal Crossing Phone Game, And It's Pretty Good.