The Huge Waste in the U.S. Health System. “That doesn’t mean we have no ideas about how to reduce administrative costs,” said Don Berwick, a physician and senior fellow at the Institute for Healthcare Improvement and author of an editorial on the JAMA study. 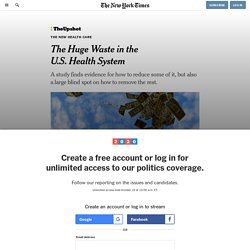 Moving to a single-payer system, he suggested, would largely eliminate the vast administrative complexity required by attending to the payment and reporting requirements of various private payers and public programs. But doing so would run up against powerful stakeholders whose incomes derive from the status quo. “What stands in the way of reducing waste — especially administrative waste and out-of-control prices — is much more a lack of political will than a lack of ideas about how to do it.” While the lead author works for Humana, he also has experience in government and academia, and this is being seen as a major attempt to refine previous studies of health care waste. Reflecting the study’s importance, JAMA published several accompanying editorials. - The Washington Post. What’s the Point of a Primary Care Doctor? How the Vaccine Injury Compensation Program Works.

Do Europeans Get Big Medical Bills? There is, however, a way to eliminate those bank-busting surprise medical bills without eliminating health insurance. Just ask Europe. Several European countries have health insurance just like America does. The difference is that their governments regulate what insurance must cover and what hospitals and doctors are allowed to charge much more aggressively than the United States does. When I described surprise medical bills to experts who focus on different western-European countries’ health systems, they had no idea what I was talking about. “What is a surprise medical bill?”

Almost all Germans are covered by a variety of health insurance, such as “sickness funds,” which are financed through taxes. From 1960: How good is government medical care? How to Negotiate Down Your Hospital Bills. These Are The Best Countries for Health and Happiness. Concrete: the most destructive material on Earth. Healthy Nation Rankings: These Are the Healthiest Countries. Maybe it’s something in the gazpacho or paella, as Spain just surpassed Italy to become the world’s healthiest country. That’s according to the 2019 edition of the Bloomberg Healthiest Country Index, which ranks 169 economies according to factors that contribute to overall health. Spain placed sixth in the previous gauge, published in 2017. Four additional European nations were among the top 10 in 2019: Iceland (third place), Switzerland (fifth), Sweden (sixth) and Norway (ninth).

Japan was the healthiest Asian nation, jumping three places from the 2017 survey into fourth and replacing Singapore, which dropped to eighth. Australia and Israel rounded out the top 10 at seventh and 10th place. Healthiest Countries in the World Bloomberg Global Health Index scores for 169 countries, with the top 10 plus U.S. highlighted Sources: Bloomberg analysis of World Health Organization data; United Nations Population Division and the World Bank Eating Habits.

Redirect?&url= Medicare-for-all explained: insurance deductibles for work plans rising. Jessica Salfia knew the pay wasn’t going to be great when she became a teacher in Martinsburg, West Virginia, but she did have really good health coverage. 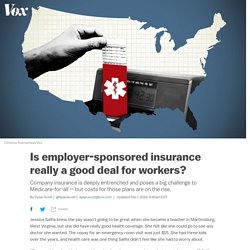 She felt like she could go to see any doctor she wanted. The copay for an emergency room visit was just $15. She had three kids over the years, and health care was one thing Salfia didn’t feel like she had to worry about. 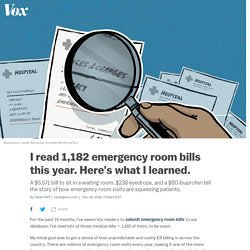 I’ve read lots of those medical bills — 1,182 of them, to be exact. My initial goal was to get a sense of how unpredictable and costly ER billing is across the country. How Cubans Live as Long as Americans at a Tenth of the Cost - The Atlantic - Pocket. Cuba has long had a nearly identical life expectancy to the United States, despite widespread poverty. 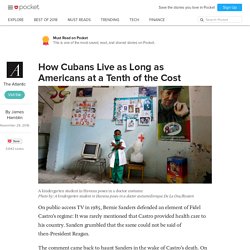 The humanitarian-physician Paul Farmer notes in his book Pathologies of Power that there’s a saying in Cuba: “We live like poor people, but we die like rich people.” Farmer also notes that the rate of infant mortality in Cuba has been lower than in the Boston neighborhood of his own prestigious hospital, Harvard’s Brigham and Women’s. All of this despite Cuba spending just $813 per person annually on health care compared with America’s $9,403.

In Cuba, health care is protected under the constitution as a fundamental human right. As a poor country, Cuba can’t afford to equivocate and waste money upholding that. It’s largely done, as the BBC has reported, through an innovative approach to primary care. Then the doctors put patients into risk categories and determine how often they need to be seen in the future. Atul Gawande wants to fix US healthcare — Quartz at Work. The Great American Health Care Panic. LEVITTOWN, Pa. 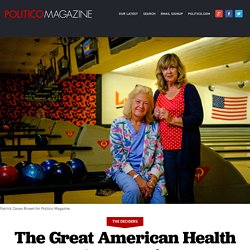 —With whiffs of cigarette smoke wafting from the adjoining Band Box bar, surrounded by the nonstop clatter of bowling pins, Donna Brown and Kaci Rickert sat across from each other at a little low table one recent evening at the shabby, homey Levittown Lanes. The women’s league teammates ate salad and ziti and made small talk. Never Home Alone: Mycobacteria Lurk in American Showers. The Last Company You Would Expect Is Reinventing Health Benefits. But employers, including that Amazon-Berkshire-JPMorgan alliance, are increasingly unhappy with the nation’s health care systems. 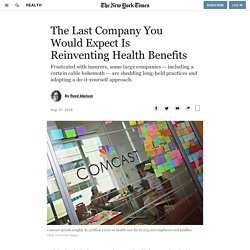 Companies are paying more than they ever have.