This is a compilation of pieces about how to make the natural environment healthier.

The Man Who Makes Water From Thin Air Wins Half-A-Million Dollar Prize. This algae bioreactor can remove as much carbon dioxide as an acre of trees. Algae could play a surprising role in the fight against climate change. 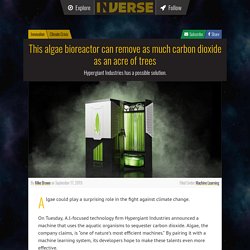 On Tuesday, A.I. -focused technology firm Hypergiant Industries announced a machine that uses the aquatic organisms to sequester carbon dioxide. - Are you a robot? This factory in the Ivory Coast is turning plastic waste into classrooms. The factory will be the first of its kind in Africa and aims to produce enough plastic bricks to build 500 classrooms by 2021. 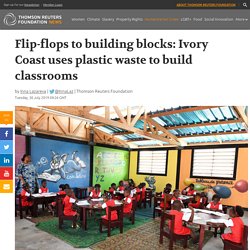 Crystalline nets harvest water from desert air, turn carbon dioxide into liquid fuel. SAN DIEGO, CALIFORNIA—When Omar Yaghi was growing up in Jordan, outside of Amman, his neighborhood received water for only about 5 hours once every 2 weeks. 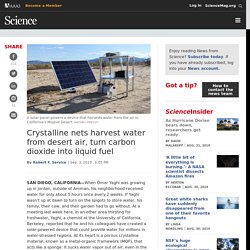 If Yaghi wasn’t up at dawn to turn on the spigots to store water, his family, their cow, and their garden had to go without. At a meeting last week here, in an-other area thirsting for freshwater, Yaghi, a chemist at the University of California, Berkeley, reported that he and his colleagues have created a solar-powered device that could provide water for millions in water-stressed regions. Massive pumice 'raft' spotted in the Pacific could help replenish Great Barrier Reef. A giant raft of pumice, which was spotted in the Pacific and is expected to make its way towards Australia, could help the recovery of the Great Barrier Reef from its bleaching episode by restocking millions of tiny marine organisms, including coral. 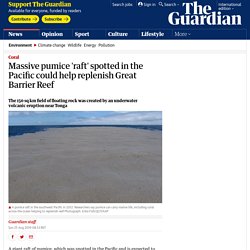 The pumice raft, which is about 150 sq km, was produced by an underwater volcano near Tonga. Scientists extract hydrogen gas from oil and bitumen, giving potential pollution-free energy. Scientists have developed a large-scale economical method to extract hydrogen (H2) from oil sands (natural bitumen) and oil fields. 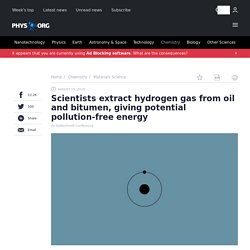 This can be used to power hydrogen-powered vehicles, which are already marketed in some countries, as well as to generate electricity; hydrogen is regarded as an efficient transport fuel, similar to petrol and diesel, but with no pollution problems. The process can extract hydrogen from existing oil sands reservoirs, with huge existing supplies found in Canada and Venezuela. Interestingly, this process can be applied to mainstream oil fields, causing them to produce hydrogen instead of oil.

And Now, the Really Big Coal Plants Begin to Close. When the Navajo Generating Station in Arizona shuts down later this year, it will be one of the largest carbon emitters to ever close in American history. 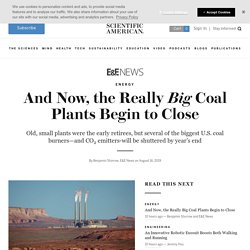 The giant coal plant on Arizona’s high desert emitted almost 135 million metric tons of carbon dioxide between 2010 and 2017, according to an E&E News review of federal figures. Its average annual emissions over that period are roughly equivalent to what 3.3 million passenger cars would pump into the atmosphere in a single year. Of all the coal plants to be retired in the United States in recent years, none has emitted more. 9 Things You Think Are Environmentally Friendly — But Aren't - The Crux. We all care about the environment at least a tiny bit. 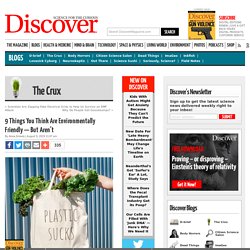 How the Salmon Cannon Works. Palm Beach Post. This Irish teenager may have a solution for a plastic-free ocean. A walk on the beach led Fionn Ferreira to develop his project on microplastic extraction from water for the annual Google Science Fair. 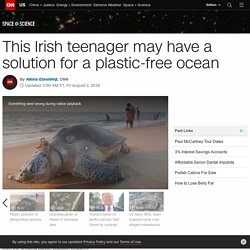 The project won the grand prize of $50,000 in educational funding at this year's event. The 18-year-old said that while he was out on that walk in his coastal hometown of Ballydehob, he ran across a stone with oil and plastic stuck to it -- something he says he's become more aware of in recent years. "I was alarmed to find out how many microplastics enter our wastewater system and consequently the oceans," he wrote in his project. That's what got Ferreira thinking about how to develop a new extraction method. The Google Science Fair has been crowning winners for eight years with the help of sponsors like Lego, Scientific American, National Geographic and Virgin Galactic.

How to remove microplastics Microplastics are pieces of plastic that are typically less than 5 millimeters long, according to the National Oceanic and Atmospheric Administration. Florida’s nasty green algae could have commercial value. U.S. 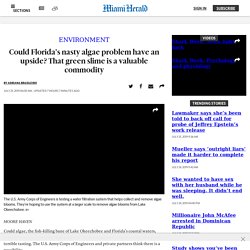 Army Corps of Engineers looking for ways to combat algae blooms Could algae, the fish-killing bane of Lake Okeechobee and Florida’s coastal waters, actually become a valuable state product? Think orange juice, except green, slimy and terrible tasting. The U.S. Running the numbers on an insane scheme to save Antarctic ice. Imagine, if you will, the engineers of the king’s court after Humpty Dumpty’s disastrous fall. 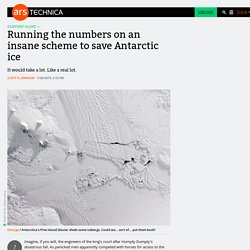 As panicked men apparently competed with horses for access to the site of the accident, perhaps the engineers were scoping out scenarios, looking for a better method of reassembling the poor fellow. But presumably none of those plans worked out, given the dark ending to that fairy tale. A recent study published in Science Advances might be relatable for those fairy tale engineers. June was the warmest June ever recorded, but there's a bigger problem. Adding 1 billion hectares of forest could help check global warming.

Global temperatures could rise 1.5° C above preindustrial levels by as early as 2030 if current trends continue, but trees could help stem this climate crisis. A new analysis finds that adding nearly 1 billion hectares of forest could remove two-thirds of the roughly 300 gigatons of carbon humans have added to the atmosphere since the 1800s. “Forests represent one of our biggest natural allies against climate change,” says Laura Duncanson, a carbon storage researcher at the University of Maryland in College Park and NASA who was not involved in the research. Talk of the Week: Optimism in an Era of Climate Change. Where will evolution take us in the Fourth Industrial Revolution? The study of evolution allows us to reconstruct the past and to understand how life evolved from simple to complex organisms.

Evolutionary reasoning can help us make sense of the biggest questions in science, from the origin of the universe to the inner workings of the human brain. But can evolution also give us a hint of what is to come? Will technologies like gene editing make natural selection redundant? Hydrogen trains: Are these the eco-friendly trains of the future? Clean electricity overtaking fossil fuels in Britain. Turning carbon dioxide into cash. Scientists from round the world are meeting in Germany to improve ways of making money from carbon dioxide. They want to transform some of the CO2 that’s overheating the planet into products to benefit humanity. They don’t claim the technology will solve climate change, but they say it will help. Carbon dioxide is already being used in novel ways to create fuels, polymers, fertilisers, proteins, foams and building blocks. Until recently, it was assumed that energy-intensive firms burning gas to fuel their processes would need eventually to capture the resulting carbon emissions and bury them underground.

New York oyster plan for cleaning Hong Kong's polluted waters. Renewable energy: the global transition, explained in 12 charts. As you might have heard, the planet is warming up, and in response, people are trying to switch to cleaner energy, to heat it up less, or at least more slowly. So how’s that going? A report released Monday goes into that question in considerable detail. The Renewables Global Status Report (GSR), released annually by the Renewable Energy Policy Network for the 21st Century (REN21, a think tank), digs into the growth rates of various energy sources, the flows of clean energy investment, and the world’s progress on its sustainability goals.

A simple and smart way to fix climate change. Sea rice research moves ahead as China works to boost food security. $2.5 trillion 'Holy Grail' found? Breakthrough discovery could lead to 100 percent recyclable plastics, scientists say. We Might Finally Be Able to Safely Drink Salt Water. This Is What Would Happen if We Turned the Sahara Desert Into a Solar Farm. 11 ways we could geoengineer the planet to reverse climate change. Europe Is Stockpiling Wind Energy by Converting It to Hydrogen.

Clean Chemistry Ørsted, an energy company in Denmark, announced in March its new plans to convert electricity from its wind turbines into hydrogen fuel, joining the ranks of several other prominent European power companies. While it’s expensive, stockpiling renewable electricity as hydrogen makes sense as Europe tries to reach its ambitious climate goals, according to Scientific American — it could be used for power on windless days instead of fossil fuels. Wind Power Ørsted’s plan is to use electricity generated from wind turbines to power electrolysis plants that split water into oxygen and useable hydrogen.

This means that the renewable electricity could also be used, albeit indirectly, to fuel cars that would otherwise have relied on fossil fuels. Get Ready For 1.5¢ Renewable Electricity, Steven Chu Says, Which Could Unleash Hydrogen Economy. Steven Chu, former U.S. Secretary of Energy, 1997 Nobel Prize winner in physics, and the new president of the American Association for the Advancement of Science. Climate change: Where we are in seven charts and what you can do to help. Image copyright Getty Images The UN has warned that the goal of limiting global warming to "well below 2C above pre-industrial levels" is in danger because major economies, including the US and the EU, are falling short of their pledges.

But scientists at the Intergovernmental Panel on Climate Change (IPCC) - the leading international body on global warming - argue the 2C pledge in the 2015 Paris accord didn't go far enough. The global average temperature rise actually needs to be kept below 1.5C, they say. Preparing to Unleash Crispr on an Unprepared World. Choice page. The Tiny Swiss Company That Thinks It Can Help Stop Climate Change. Five things we have learned from the IPCC report. BBC environment correspondent Matt McGrath outlines five key takeaways from one of the most important reports on rising temperatures issued by the Intergovernmental Panel on Climate Change.

Their study, on the impacts and possible methods of keeping temperatures from warming by more than 1.5C, has just been launched in South Korea. Climate change: Where we are in seven charts and what you can do to help. Science education must reflect reality: We only have 12 years to stop climate change. How Boyan Slat’s The Ocean Cleanup Was Derailed By A Flawed Design. Boyan Slat: How we will rid the oceans of plastic (May 2017)

Allan Savory: How to green the world's deserts and reverse climate change. Documentary on Holistic Management.