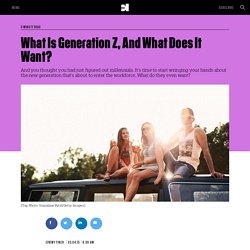 The oldest members of this cohort are barely 18 and they’re already getting a bad rap. Media and market research companies have labeled them "screen addicts" with the attention span of a gnat. And the pressure: They only have the weight of saving the world and fixing our past mistakes on their small shoulders. Really? While generational research is an inherently messy process—older generations study "the kids" to figure them out—much of the recent research is awash in normative preconceptions, biases, and stereotypes. My firm Altitude set out to dig below the surface to understand not only what Gen Z were doing but why—in their own words. What we learned was surprising. 1: It’s not an attention problem, It’s an 8-second filter The recent headline-grabbing studies suggest that Gen Z attention spans have shrunk to eight seconds and that they’re unable to focus for extended amounts of time. Forbes Welcome.

Who are Generation Z? The latest data on today&#39;s teens. Learn About Gen Z (aka Generation Z) on GEN HQ. What is the name for the generation born after Millennials: Gen Z, iGen, Centennials, or something else? 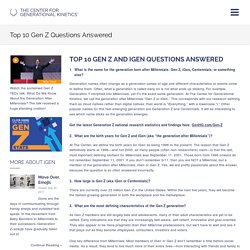 Generation names often change as a generation comes of age and different characteristics or events come to define them. Often, what a generation is called early on is not what ends up sticking. For example, Generation Y morphed into Millennials, yet it’s the exact same generation. At The Center for Generational Kinetics, we call the generation after Millennials "Gen Z or iGen.”

This corresponds with our research defining them as cloud natives rather than digital natives; their world is “iEverything,” with a lowercase “i.” What are the birth years for Gen Z and iGen (aka “the generation after Millennials”)? At The Center, we define the birth years for iGen as being 1996 to the present. Log In - New York Times. Generation Z avoids advertising, uses ad blockers and skips content. To reach them, brands would do best to use humor, rather than celebrities, in their advertising. 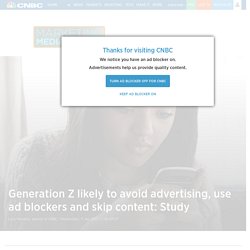 Gen Z is three times more likely to be receptive to funny advertising, and they also want music and a good story to feature. When it comes to blocking digital advertising, Gen Z is "more adept" at downloading ad blocking software in the U.S., according to the report. Ad blocking is an increasing problem for brands, with 309 million people doing so on the mobile web alone, according to statistics from PageFair released in May 2016. 8 Key Differences between Gen Z and Millennials. A question I’ve been hearing a lot lately is “What is the difference between Millennials and Generation Z?” 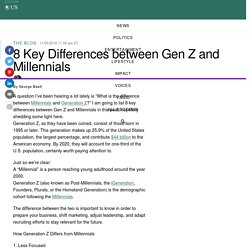 I am going to list 8 key differences between Gen Z and Millennials in this post, hopefully shedding some light here. Generation Z, as they have been coined, consist of those born in 1995 or later. This generation makes up 25.9% of the United States population, the largest percentage, and contribute $44 billion to the American economy. By 2020, they will account for one-third of the U.S. population, certainly worth paying attention to.

Forbes Welcome. Millennial Reading Habits. Watching a 25-year-old walking down the street glued to his smartphone, you might assume that he’s looking at a frivolous Instagram post or passively scrolling through a Twitter feed. 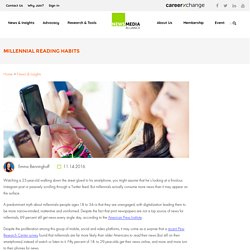 But millennials actually consume more news than it may appear on the surface. Why Millenials Have to Rethink Their Reading Habits. Do Millennials Read? Yes, But They Read Differently. “I don’t read a lot, I never have. 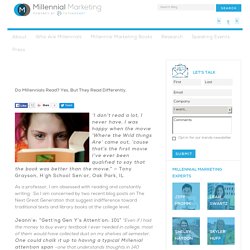 I was happy when the movie ‘Where the Wild things Are’ came out, ’cause that’s the first movie I’ve ever been qualified to say that the book was better than the movie.” — Tony Grayson, High School Senior, Oak Park, IL As a professor, I am obsessed with reading and constantly writing. So I am concerned by two recent blog posts on The Next Great Generation that suggest indifference toward traditional texts and library books at the college level. Study: Millennials Engage With Magazines Via Social Media, but They Want Something Out of It. While many magazines are still struggling to produce revenue from digital platforms, their social media efforts aren’t going to waste—if they have something tangible to offer. 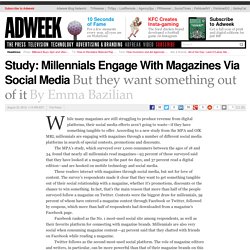 According to a new study from the MPA and GfK MRI, millennials are engaging with magazines through a number of different social media platforms in search of special contests, promotions and discounts. The MPA’s study, which surveyed over 1,000 consumers between the ages of 18 and 34, found that nearly all millennials read magazines—93 percent of those surveyed said that they have looked at a magazine in the past 60 days, and 37 percent read a digital edition—and are hooked on mobile technology and social media. Swipe magazine: will millennials read 'the best of the web' in print? If you live in one of London’s hipper areas or commute into its centre, you may have been approached this morning at the tube station by a young person in a blue T-shirt handing out yet another free magazine. 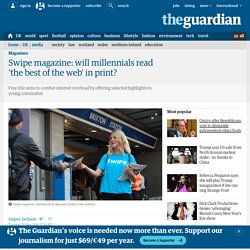 Aimed at the almost mythical millennial the media is obsessed with, Swipe magazine aims to stand out from Time Out or Shortlistby offering “the best of the internet in print”. The premise makes sense, on paper at least. People like reading print, but there’s loads of good stuff on the internet. Turns out traditional publishers do just fine with millennials. The conceit of a raft of new publishers is that traditional media companies have lost their way with young audiences. 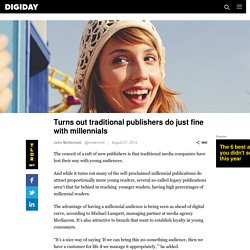 And while it turns out many of the self-proclaimed millennial publications do attract proportionally more young readers, several so-called legacy publications aren’t that far behind in reaching younger readers, having high percentages of millennial readers. The advantage of having a millennial audience is being seen as ahead of digital curve, according to Michael Lampert, managing partner at media agency Mediacom. It’s also attractive to brands that want to establish loyalty in young consumers.