Robots inch closer to ‘feeling’ pain. SEATTLE — A robot with a sense of touch may one day “feel” pain, both its own physical pain and empathy for the pain of its human companions. 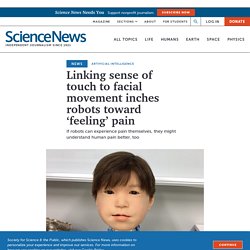 Such touchy-feely robots are still far off, but advances in robotic touch-sensing are bringing that possibility closer to reality. Sensors embedded in soft, artificial skin that can detect both a gentle touch and a painful thump have been hooked up to a robot that can then signal emotions, Minoru Asada reported February 15 at the annual meeting of the American Association for the Advancement of Science. This artificial “pain nervous system,” as Asada calls it, may be a small building block for a machine that could ultimately experience pain (in a robotic sort of way). Sex robots are here, but laws aren't keeping up with the ethical and privacy issues they raise. The robots are here. 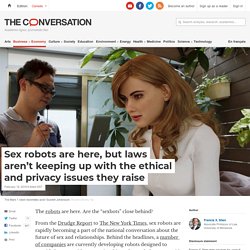 Are the “sexbots” close behind? From the Drudge Report to The New York Times, sex robots are rapidly becoming a part of the national conversation about the future of sex and relationships. Behind the headlines, a number of companies are currently developing robots designed to provide humans with companionship and sexual pleasure – with a few already on the market. Unlike sex toys and dolls, which are typically sold in off-the-radar shops and hidden in closets, sexbots may become mainstream. A 2017 survey suggested almost half of Americans think that having sex with robots will become a common practice within 50 years. As a scholar of artificial intelligence, neuroscience and the law, I’m interested in the legal and policy questions that sex robots pose. Scientists 'may have crossed ethical line' in growing human brains. Neuroscientists may have crossed an “ethical rubicon” by growing lumps of human brain in the lab, and in some cases transplanting the tissue into animals, researchers warn.

Many scientists believe that organoids have the potential to transform medicine by allowing them to probe the living brain like never before. But the work is controversial because it is unclear where it may cross the line into human experimentation. On Monday, researchers will tell the world’s largest annual meeting of neuroscientists that some scientists working on organoids are “perilously close” to crossing the ethical line, while others may already have done so by creating sentient lumps of brain in the lab.

“If there’s even a possibility of the organoid being sentient, we could be crossing that line,” said Elan Ohayon, the director of the Green Neuroscience Laboratory in San Diego, California. “We don’t want people doing research where there is potential for something to suffer.” A Lab Grew a “Mini Brain” From This Guy’s Cells. Then Things Got Weird. Modern Love: Are We Ready for Intimacy With Robots? Three years later, in 2005, Ishiguro unveils Repliee Q1 Expo to the public. Modeled on a grown woman (a popular Tokyo newscaster) and produced with better funding, this version can move its upper body fluidly and lip-synch to recorded speech.

Ishi­guro’s lab conducts several studies with it; the results are featured in a major Japanese robotics journal; the lab is filmed for television; he hears about a copycat android in South Korea. As a growing audience is drawn to Ishiguro’s simulated human, his instincts are validated. But he now wants something more. Twice he has witnessed others have the opportunity, however confusing, to encounter their robot self, and he covets that experience. Ishi­guro has hundreds of photos of the Geminoid’s assembly. It also wears fitted black slacks, like Ishi­guro’s, and black sneakers stuffed with prosthetic feet in matching socks; a black wig, styled like the hair of its maker, is fastened onto the android’s scalp with snaps. Now he points at me. Can Sex Robots Say Yes? A Hollywood Brothel Requires Cyborgs’ Consent. Harmony, one of many “fully customizable” Real Doll X robots, is the main attraction at a proposed sex robot brothel in West Hollywood that would require “consent.” 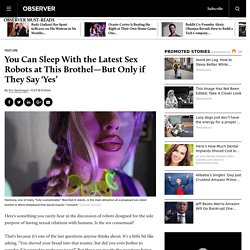 Unicole Unicron Here’s something you rarely hear in the discussion of robots designed for the sole purpose of having sexual relations with humans: Is the sex consensual? That’s because it’s one of the last questions anyone thinks about. It’s a little bit like asking, “You shoved your bread into that toaster, but did you even bother to wonder if it wanted to make you toast?” But these are exactly the questions being asked by Unicole Unicron—yes, that’s her actual name—a self-described “gender non-conforming Pop Star Cult Leader” from Pasadena, California, who hopes to open the world’s first “consent-focused robot brothel,” called Eve’s Robot Dreams, in West Hollywood later this year.