'Our diet is killing us quietly': Fiji's diabetes crisis. At the height of his 15-year career as a surgeon in the Pacific nation of Fiji, Dr Jone Hawea was performing eight to 10 diabetes-related operations every day – at least two of which were the amputations of limbs. 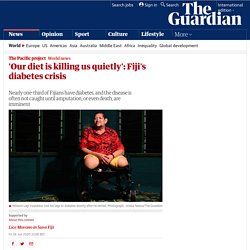 “Our wards are always full of diabetes cases. Sometimes our surgical wards wouldn’t be able to deal with the non-emergency cases because there’s all this diabetes surgery to do,” says Hawea. Hawea, a leading non-communicable disease specialist in Fiji, says these figures would be common in major hospitals around the country, which has one of the highest rates of diabetes in the world. Surgeons in the Pacific nation describe the amputations they are forced to perform as a “dirty business”. “It became so common and so unattractive I started not feeling anything about the work. While in many countries, diabetes is detected early and can be managed through diet, exercise and medication, in Fiji, the disease is often not caught until amputation, or even death, are imminent. Why are people from BAME groups dying disproportionately of Covid-19? One explanation for why people from black and minority ethnic (BAME) backgrounds are dying in disproportionately high numbers is demography. 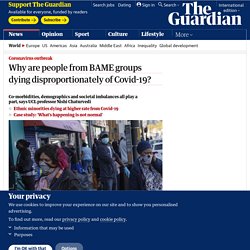 The virus hit London first and hit it hardest. But even when you take these regional differences into account there is a mismatch. In particular, if you take into account that ethnic minorities are generally younger – particularly important for Covid-19 where 90% of deaths are in people over 60 – the ethnic differences become even more stark. Co-morbidities could certainly play a role. The black population, where the discrepancy appears to be greatest, is particularly afflicted with hypertension. Genetics sounds like an easy get-out clause, but it isn’t. Ethnic minorities are over-represented in high-risk occupations, including health workers, in the transport sector and essential shop work.

The evidence on ethnic differences in healthcare seeking behaviour is quite messy, and we need to remember that these are quite heterogeneous groups. Two million in UK at risk of type 2 diabetes as obesity crisis grows. A record number of people are at risk of developing type 2 diabetes, increasing their chances of suffering a heart attack or stroke, the NHS has said. 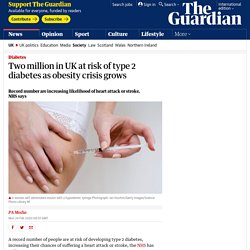 A “growing obesity crisis” has led to nearly 2 million people in England being exposed to the condition that causes the level of sugar in the blood to become too high. As part of efforts to tackle the problem, a radical new liquid diet will be available on the NHS to put type 2 diabetes into remission. Five thousand patients will be restricted to 800 calories per day for three months in a pilot to be rolled out from April. This will be followed by a further nine months of support to help them maintain weight loss. According to new NHS figures, there are 1,969,610 patients registered with a GP who have non-diabetic hyperglycaemia, a condition that puts people at risk of type 2 diabetes. The health service said the problem could become greater still because of the rise in obesity levels. Article: Prognosis of diabetes in the developing world. Article: The insulin dilemma in resource-limited countries. A way forward? Article: Diabetes care in sub-Saharan Africa. 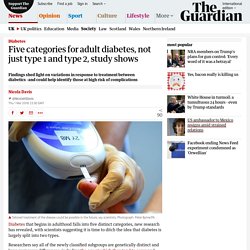 Researchers say all of the newly classified subgroups are genetically distinct and have numerous differences, including the age at which they tend to occur and different levels of risk for complications such as kidney disease. The team say the findings shed light on why some diabetics respond very differently to treatment than others, adding that it could help identify those who might be at high risk of complications, and lead to tailored treatment of the disease.

“For the patient, I think it will mean a more individualised therapy [and] a better quality of life,” said Leif Groop, professor of diabetes and endocrinology at Lund University, who led the study. At present, diabetes is classified into two main forms, both of which have links to genetics. . … we have a small favour to ask. Global Guideline for Type 2 Diabetes - IDF. There is now extensive evidence on the optimal management of diabetes, offering the opportunity of improving the immediate and long-term quality of life of those with diabetes. 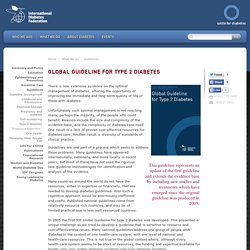 Unfortunately such optimal management is not reaching many, perhaps the majority, of the people who could benefit. Reasons include the size and complexity of the evidence-base, and the complexity of diabetes care itself. One result is a lack of proven cost-effective resources for diabetes care. Another result is diversity of standards of clinical practice. This guideline represents an update of the first guideline and extends the evidence base by including new studies and treatments which have emerged since the original guideline was produced in 2005. Guidelines are one part of a process which seeks to address those problems. Many countries around the world do not have the resources, either in expertise or financially, that are needed to develop diabetes guidelines. IDF diabetes atlas - Home. Journal: The Lancet 24 May 2008: special issue on diabetes. Manchester. Online Interactive Modules. Diabetes is one of the largest global health emergencies of the 21st century. 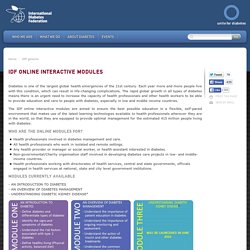 Each year more and more people live with this condition, which can result in life-changing complications. The rapid global growth in all types of diabetes means there is an urgent need to increase the capacity of health professionals and other health workers to be able to provide education and care to people with diabetes, especially in low and middle income countries.

The IDF online interactive modules are aimed to ensure the best possible education in a flexible, self-paced environment that makes use of the latest learning technologies available to health professionals wherever they are in the world, so that they are equipped to provide optimal management for the estimated 415 million people living with diabetes. Who are the online modules for? Opinion: Resisting expanding disease empires: why we shouldn’t label healthy people as sick. Report: Life course perspectives on coronary heart disease, stroke and diabetes. Review: Adapting chronic care models for diabetes care delivery in low-and-middle-income countries: A review. Copyright©The Author(s) 2015. 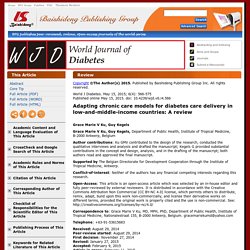 Adapting chronic care models for diabetes care delivery in low-and-middle-income countries: A review Grace Marie V Ku, Guy Kegels Grace Marie V Ku, Guy Kegels, Department of Public Health, Institute of Tropical Medicine, B-2000 Antwerp, Belgium. The mysteries of type 2 diabetes in developing countries. Video: Simon Manyara and AMPATH. Web page: WHO diabetes programme. WHO fact sheet: Diabetes. Yogesh Jain: Lean diabetes in rural poor populations—management of this subset of patients needs rethinking – The BMJ. In the impoverished community in rural central India where my colleagues and I run a comprehensive primary health care programme, half of the population live below the poverty line [spend less than USD 0.5 per day] and undernutrition is rampant (median Body Mass Index 18.9 in men and 18.4 in women). 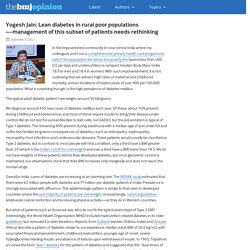 With such impoverishment, it is not surprising that we witness high rates of maternal and childhood mortality, and an incidence of tuberculosis of over 400 per 100,000 population. What is surprising though, is the high prevalence of diabetes mellitus. The typical adult diabetic patient I see weighs around 50 kilograms. We diagnose around 450 new cases of diabetes mellitus each year. Of these, about 10% present during childhood and adolescence, and most of these require insulin to bring their disease under control.