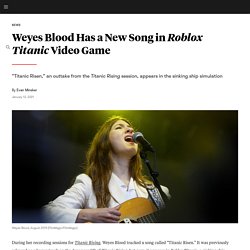 It was previously released as a bonus track on the Japanese CD of Titanic Rising, but now, it appears in Roblox Titanic, a sinking ship simulation built within the mega-popular Roblox game platform. Several other selections from Titanic Rising are featured in the game as well. You can play it here. Following the release of 2019’s Titanic Rising, Natalie Mering collaborated with Tim Heidecker on a 2020 album called Fear of Death. Olivia Rodrigo, 'Drivers License': Song You Need to Know. Is it too early to call song of the year? 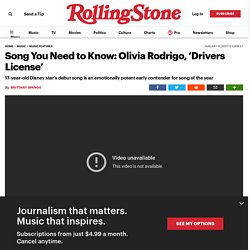 Olivia Rodrigo’s debut single “Drivers License” makes it difficult to not believe that both she and the moving power ballad are meant to completely dominate 2021. Rodrigo’s nostalgic, piano-assisted song builds slowly as a story about the 17-year-old finally getting her license to drive. But the monumental occasion is soured by her heartbreak: she was supposed to celebrate the accomplishment with her ex, who has moved on to an older blonde that she reveals is “everything I’m insecure about.” So Rodrigo drives through the suburbs, heartbroken and angry, wondering if any of the feelings were ever even real.

As the song progresses, Rodrigo’s voice builds to cathartic howls of pain, and the bridge is a lush, layered release as she reveals “I still fuckin’ love you.” Before “Drivers License,” Rodrigo was building a name for herself over the past five years through Disney. I Wanna Go Home · Daven Tillinghast. Music to Connect To — People Powered Playlists by musicto. Conan Gray - Maniac (Lyrics) Brian Eno. English musician, composer, record producer and visual artist Brian Peter George St John le Baptiste de la Salle Eno, RDI (; born Brian Peter George Eno, 15 May 1948) is an English musician, record producer, visual artist, and theorist best known for his pioneering work in ambient music and contributions to rock, pop and electronic music.[1] A self-described "non-musician", Eno has helped introduce unique conceptual approaches and recording techniques to contemporary music.[1][2] He has been described as one of popular music's most influential and innovative figures.[1][3] Dating back to his time as a student, Eno has also worked in other media, including sound installations and his mid-70s co-development of Oblique Strategies, a deck of cards featuring aphorisms intended to spur creative thinking. 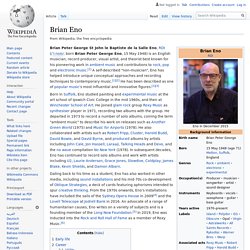 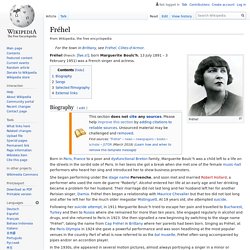 Biography[edit] Born in Paris, France to a poor and dysfunctional Breton family, Marguerite Boulc'h was a child left to a life on the streets in the sordid side of Paris. In her teens she got a break when she met one of the female music-hall performers who heard her sing and introduced her to show business promoters. She began performing under the stage name Pervenche, and soon met and married Robert Hollard, a performer who used the nom de guerre "Roberty". Hildegarde. Hildegarde Loretta Sell (February 1, 1906 – July 29, 2005) was an American cabaret singer, well known for the song "Darling, Je Vous Aime Beaucoup". 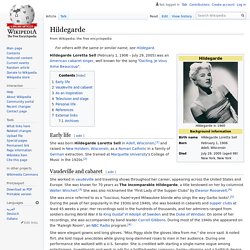 Early life[edit] She was born Hildegarde Loretta Sell in Adell, Wisconsin,[1] and raised in New Holstein, Wisconsin, as a Roman Catholic in a family of German extraction. Billie Holiday. American jazz singer and songwriter (1915–1959) She was a successful concert performer throughout the 1950s with two further sold-out shows at Carnegie Hall. 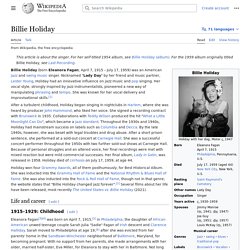 Because of personal struggles and an altered voice, her final recordings were met with mixed reaction but were mild commercial successes. Her final album, Lady in Satin, was released in 1958. Holiday died of cirrhosis on July 17, 1959 at age 44. She won four Grammy Awards, all of them posthumously, for Best Historical Album. My Truth. 1999 studio album by Robyn Background[edit] Development[edit] I feel more safe about myself and my music now, and I've become more focused on maintaining a positive whole on the record, even though certain songs that I write are rather sad. 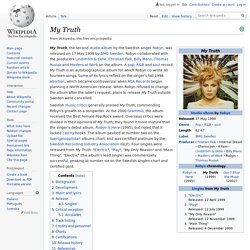 —Robyn about My Truth, June 1999[1] Robyn co-wrote all of My Truth's fourteen tracks.[10][11] Although the singer returned to Sweden from North America in the summer of 1998, she returned to the US several times to work on the album. Mele Kalikimaka. Song The Beach Boys recorded a song of the same name for their album Ultimate Christmas, but it contains lyrics and music completely different from the song written by Robert Alex Anderson. 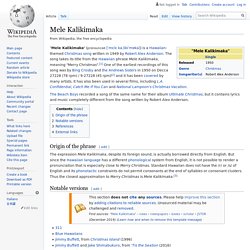 Origin of the phrase[edit] The expression Mele Kalikimaka, despite its foreign sound, is actually borrowed directly from English. But since the Hawaiian language has a different phonological system from English, it is not possible to render a pronunciation that is especially close to Merry Christmas. Standard Hawaiian does not have the /r/ or /s/ of English and its phonotactic constraints do not permit consonants at the end of syllables or consonant clusters. Jessica Simpson. Life and career[edit] 1980–1998: Childhood and career beginnings[edit] Jessica Ann Simpson was born in Abilene, Texas.[6] She is the first child of Tina Ann Simpson (née Drew), a homemaker,[7] and Joseph "Joe" Simpson, a psychologist and Baptist youth minister.[8] Simpson's parents married in 1978; they divorced in 2013.[9][10][11][12] Simpson has stated that she grew up in Dallas and Waco, but her parents now live in McGregor, Texas.[13] Simpson is the first child of the couple; she has a younger sister, Ashlee Simpson.[14] In her preteens she briefly attended Amelia Middle School when living in the midwest while her father did outreach in Cincinnati, Ohio. 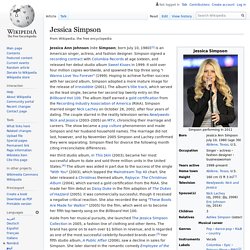 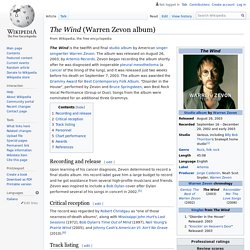 The album was released on August 26, 2003, by Artemis Records. Zevon began recording the album shortly after he was diagnosed with inoperable pleural mesothelioma (a cancer of the lining of the lung), and it was released just two weeks before his death on September 7, 2003. The album was awarded the Grammy Award for Best Contemporary Folk Album. "Disorder in the House", performed by Zevon and Bruce Springsteen, won Best Rock Vocal Performance (Group or Duo). Grammy Awards. Warren Zevon. American singer-songwriter Warren William Zevon (; January 24, 1947 – September 7, 2003)[1] was an American rock singer-songwriter and musician. Known for his dry wit and acerbic lyrics, he was a guest numerous times on Late Night with David Letterman and the Late Show with David Letterman. La Rochelle Band - Burning In My Soul (Official Video)

David Bowie. Lou Reed. Lyrics On Screen. “Motivation” by Normani Review. Lana Del Rey Announces New Spoken Word Album. Lana Del Rey has announced that on January 4, she’s releasing a new spoken word album of “freestyle poetry.” The news comes as she prepares to release a printed collection of poetry. She shared the album news in a video on Instagram, revealing that half of the album’s proceeds will go to benefit Native American organizations. Earth, Wind & Fire - Boogie Wonderland. Ralph Tresvant-Sensitivity. Jungle Club (Retail) New Edition Candy Girl Lyrics. Lizzo: TIME's Entertainer of the Year 2019. Surely, in the year of our lord 2019, you know who Lizzo is.

I mean, even if you don’t think you know, girl—you know. Her song is in that Walmart commercial with the dancing cart people, and another one is in an ad for GrubHub, and I swear I was watching a football pregame show and heard strains of the piano riff from her song “Good as Hell” twinkling in the background. John Coltrane - Equinox (Original) Marta Sanchez Quintet at Blue Note (El Rayo de Luz) Hypnagogic pop. Hypnagogic pop is pop or psychedelic music[2][3] that explores elements of cultural memory and nostalgia by drawing on the popular entertainment and recording technology of the past, particularly the 1980s.[4] The genre developed in the mid to late 2000s as American lo-fi and noise musicians began referencing retro aesthetics remembered from childhood, such as 1980s radio rock, new age, MTV one-hit wonders, and Hollywood synthesizer soundtracks,[5] as well as analog technology and outdated pop culture.

Characteristics[edit] Hypnagogic pop has a preoccupation with both decaying analog technology and bombastic representations of synthetic elements in 1980s and 1990s popular culture, according to critic Adam Trainer. Downtempo. Diane Warren. There You'll Be (Remastered) Maltin on Movies: Diane Warren. Haim Cover Robyn's 'Show Me Love' on BBC Radio 1's Piano Sessions. For their latest radio pop/soft-rock cover, Haim have decided to perform a Robyn song — but it’s not “Dancing on My Own” or anything from the Body Talk era, when Robyn became the international patron saint of dancing out your feelings. Instead, the sisterly trio from L.A. performed “Show Me Love” — one of Robyn’s early radio hits from the Nineties — on BBC Radio 1’s Piano Sessions with Este Haim on lead vocals. The band beautifully adapted the pop song into a searing piano ballad, and it pairs well with their intimate new song “Hallelujah,” which they performed in the same session.

In addition to their Robyn cover, Haim recently unveiled a cover of Leonard Cohen’s 1984 song “If It Be Your Will,” produced by Ariel Rechtshaid and released the same day as Cohen’s posthumous album Thanks for the Dance. The song is featured on Hanukkah+, a new collection of Hanukkah songs featuring other contributions by The Flaming Lips, Yo La Tengo, Jack Black and more. Irving Burgie. Stevie Wonder - Superstition. Hollywood Undead - Young. Fun.: We Are Young ft. Janelle Monáe [OFFICIAL VIDEO] Katy Perry - Wide Awake. Katy Perry - Roar (Official)