Teaching and learning in higher education

The future of education or just hype? The rise of Minerva, the world's most selective university. No one could accuse CEO and businessman Ben Nelson of lacking ambition. 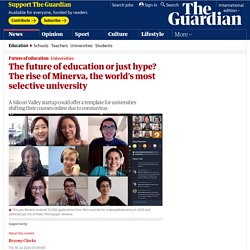 “I wanted to create a university that serves as a model for other institutions, by being indisputably the best university in the world,” he says, bouncing up and down on a video call from his San Francisco office. “Unless you demonstrate that you are the absolute best, that you can provide an education that Harvard, Cambridge and Oxford cannot come close to, no one will listen. And we are doing exactly that.” In 2012 Nelson founded the Minerva Project, a venture-backed Silicon Valley startup, with the aim of revolutionising higher education. It partnered with the Keck Graduate Institute to create Minerva Schools at KGI, a non-profit university programme headquartered in San Francisco.

Steps of PBL ed (1) In the 2020s universities need to step up as a central pillar of civil society. Higher education review of the decade? 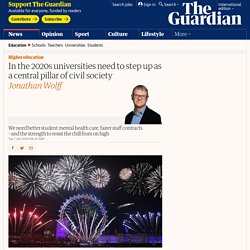 Hmm. The 2010s will be remembered by me as the age of the academic league table. Global, local, research, teaching, or knowledge exchange; official, unofficial, by newspaper or blogger. Eton master who wants pupils to learn very slowly. You may not have heard of slow education but you probably know about the slow food movement, founded in Italy in 1986 and hugely popular worldwide. 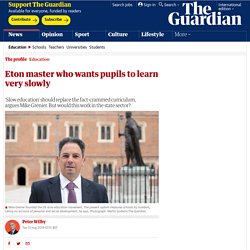 Slow food is the opposite of fast food: it promotes local ingredients and traditional cooking in place of processed ready meals and takeaways. After its success, along came slow fashion (buy clothes that last), slow TV (spend hours watching a boat drift down a river) and so on. To learn about slow education, I go to see Mike Grenier, a 49-year-old English teacher at Eton who founded a UK movement to promote it in 2012. “Slow education”, Grenier explains in his disappointingly modern and nondescript Eton classroom, “means developing lasting relationships between student and teacher and between student and learning”. Discountsforteachers.co. Trigger warnings OK but no-platforming may be illegal, universities warned. Consistently no-platforming people could have a chilling effect on free speech on university campuses and should not take place, according to government guidance. 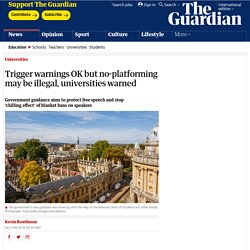 While student unions are free to choose whether or not to invite individual speakers, placing blanket bans on groups that hold a particular political view is likely to breach English and Welsh free speech laws, according to the guidance released on Saturday. “Free speech is a value integral to the independence and innovation that embodies the higher education sector in the UK, fuelling academic thought and challenging injustice,” said the universities minister, Chris Skidmore. Obsessing over Oxbridge is not the way to beat inequality. Elitism and Oxbridge: it is the hardy perennial of debate about the state of our universities. 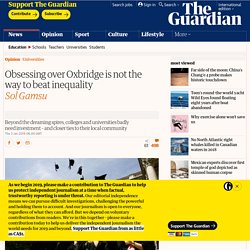 Last month yet another report – this one from the Sutton Trust – highlighted the extent to which Oxford and Cambridge remain dominated by students from the south-east of England, many of them selected from a small number of elite fee-paying and selective state schools. The stark inequity of Oxbridge and Russell Group admissions has been a recurrent theme for at least a decade. Despite genuine efforts to increase access for students from marginalised communities, progress has been achingly slow. So it’s easy to see why access to elite institutions has come to be seen as the litmus test of how equal our higher education system is.

Is your university degree barely worth the paper it’s written on? Discuss. On the other hand... Theconversation. University rankings can be very influential. 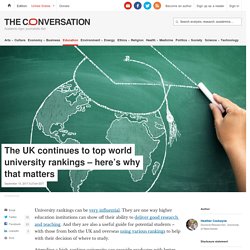 They are one way higher education institutions can show off their ability to deliver good research and teaching. And they are also a useful guide for potential students – with those from both the UK and overseas using various rankings to help with their decision of where to study. You don’t need a double first to see university funding is in chaos. It very nearly didn’t happen. 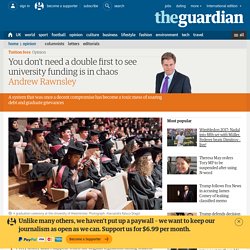 When the original legislation raising student tuition fees was put to parliament by the then Labour government, the Tories and the Lib Dems opposed it and they were joined by a band of Labour rebels. It is a mildly amusing historical footnote that January 2004 was one of the rare occasions when Theresa May and Jeremy Corbyn rubbed shoulders in the same division lobby. That legislation, which set the fee cap at what now sounds like a very modest £3,000 a year, passed by just five votes.

At the time, I had more sympathy with the government than its opponents. Almost everyone agreed that it was a Good Thing for more young people to go to university. Theconversation. There is a growing crisis within children’s mental health, and this is not a term used lightly – between 2010 and 2015 there was a 50% increase in hospital admissions because of children self-harming. 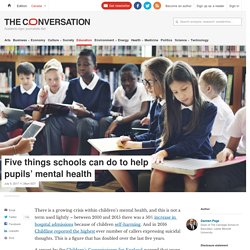 And in 2016 Childline reported the highest ever number of callers expressing suicidal thoughts. This is a figure that has doubled over the last five years. A report by the Children’s Commissioner for England warned that more than 800,000 children were living with mental health issues in the UK, with a large proportion from vulnerable families. Issues they face include parents with alcohol addiction, involvement in the care system, as well as dangers posed by street gangs and modern slavery. 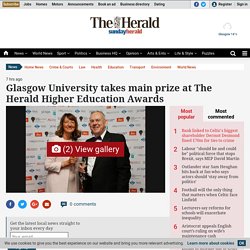 The event, hosted by STV’s Jennifer Reoch at the Radisson Blu Hotel in Glasgow was attended by key influential figures from the Scottish Higher Education Sector. They saw Glasgow University pick up the overall Higher Educational Institution of the Year Award for the third year running. In addition, the university picked up the Enhancing Student Learning Award for its Closing the Feedback Loop project, Outstanding Contribution to the Local Community for its ‘Chasing the Waves’ theatre show, Campaign of the Year for The Simpsons Campaign and the Innovation Technology Excellence Award for its Vires project. Other winners included Edinburgh Napier University, Robert Gordon University, West College Scotland and the University of the West of Scotland who picked up two awards on the night. A City of Glasgow College spokesperson said: "What a great evening. University 'safe space' policies leave academics in fear of losing their jobs, claims professor.

University “safe space” policies are leaving academics afraid to speak their minds for fear of losing their jobs, a professor has claimed. 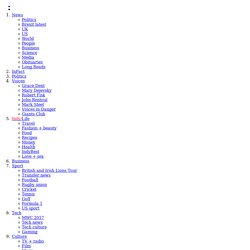 Dennis Hayes, professor of education at Derby University, suggested there is a “climate of censorious quietude” in universities that means important issues are simply not discussed. His comments came as universities minister Jo Johnson warned that higher education institutions have a legal duty to ensure freedom of speech.

Theconversation. Skills For Future Success in a Disruptive World of Work – Tanmay Vora. My dad retired as a Library Science professional soon after which the profession of Library management was transformed by digital forces. With the rise of digital content, we now needed different kind of librarians who could help us walk through this maze of information and find what we need, not just deal with only physical books. The way libraries are structured and run has completely changed (and it continues to evolve). In past 15 years, we have seen number of businesses being disrupted or transformed completely by digital forces.

Recent months have witnessed a great deal of public hand-wringing over the antics of students seeking to turn higher education into an intellectual and emotional safe space. Opinion: Ranking universities on excellent teaching will be better for everyone. Opinion: Is research-driven teaching in HE proven or doing more harm than good? Teaching skills: feedback.