Why We Like Certain Music: The Brain And Musical Preference. Most classical music lovers can rattle off at least a few different reasons why they love the genre that spans many centuries of Western music. 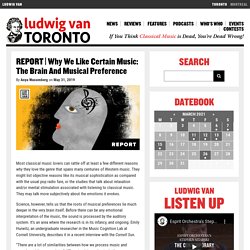 They might list objective reasons like its musical sophistication as compared with the usual pop radio fare, or the studies that talk about relaxation and/or mental stimulation associated with listening to classical music. Music and the Brain: What Happens When You're Listening to Music. Explore Click on the region of the brain to the right to learn more about how it effects your perception of music. 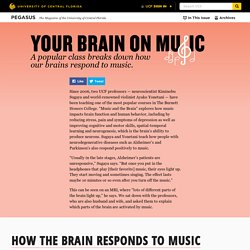 Frontal Lobe What. The Subtle Tricks Shopping Sites Use to Make You Spend More. History of Psychology Show. Remember The Dress? Here’s Why We All See Colors Differently. Choice page. Science has been in a “replication crisis” for a decade. Have we learned anything? Knowablemagazine. (PDF) Varieties of Scientific Racism (in Psychology)

Jennifer Pluznick: You smell with your body, not just your nose. Choice page. What Research in Antarctica Tells Us about the Science of Isolation. Neuroscience research shows we reorganize our memory based on how we will use it later. A recent international scientific study published in the journal PLOS ONE has shown that the way the brain stores temporary information is different depending on the use one might give to that information in the future. 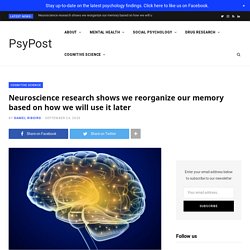 The research analysed the brain activity of 14 participants through functional magnetic resonance imaging while they were performing simple visual memory tasks on a computer screen. Differences in their brain activity patterns were found between participants who had to answer by communicating verbally or by pressing a button. The Social Life of Genes. A few years ago, Gene Robinson, of Urbana, Illinois, asked some associates in southern Mexico to help him kidnap some 1,000 newborns. 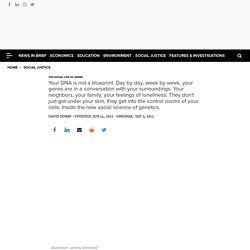 For their victims they chose bees. Half were European honeybees, Apis mellifera ligustica, the sweet-tempered kind most beekeepers raise. The other half were ligustica’s genetically close cousins, Apis mellifera scutellata, the African strain better known as killer bees. Though the two subspecies are nearly indistinguishable, the latter defend territory far more aggressively. The Brain Senses Touch beyond the Body. Luke Miller, a cognitive neuroscientist, was toying with a curtain rod in his apartment when he was struck by a strange realization. 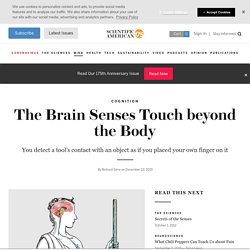 When he hit an object with the rod, even without looking, he could tell where it was making contact like it was a sensory extension of his body. “That’s kind of weird,” Miller recalls thinking to himself. PsychSessions: Conversations about Teaching N' Stuff: E019: Danae Hudson and Brooke Whisenhunt: The Dynamic Duo of Intro Psych. The original PsychSessions podcast is co-hosted by Garth Neufeld from Cascadia College and Eric Landrum from Boise State University. 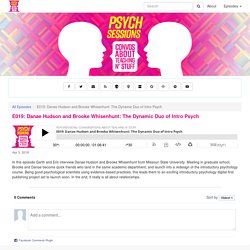 We leverage our connections with psychology teachers from all levels (high school, community college, college, university) as well as individuals from other occupations to have meaningful conversations about what it means to be an educator. Of course, we veer away from the teaching conversation from time to time to hear about origin stories and the personal perspectives of our guests, touching on current events and topics of interest. Our ASKPsychSessions feature is hosted by Marianne Lloyd from Seton Hall University. For ASKPsychSessions, listeners submit questions about teaching and learning, and Marianne interviews experts and posts short features with the question and answer together. Could Reality Shows Become Reality Experiments? – Association for Psychological Science – APS. That was the question posed to APS Board Member Barbara A. 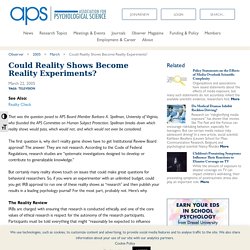 Spellman, University of Virginia, who founded the APS Committee on Human Subject Protection. Spellman breaks down which reality shows would pass, which would not, and which would not even be considered. The first question is, why don’t reality game shows have to get Institutional Review Board approval? The answer: They are not research. According to the Code of Federal Regulations, research studies are “systematic investigations designed to develop or contribute to generalizable knowledge.” 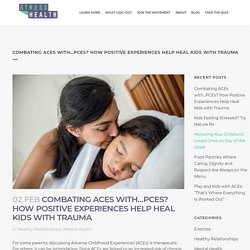 For others, it can be intimidating. Since ACEs are linked to an increased risk of chronic disease in later life, finding out your score (or your child’s score) may be a little daunting. Remember, though, that an increased risk does not mean you will develop a chronic disease. Scientists report gains in treating kids suffering chronic trauma - The Daily Memphian. Choice page. Neuroscience study finds the brain's response to emotional conflict predicts antidepressant treatment outcomes. Neuroimaging data from a large randomized controlled trial indicates that how people respond to antidepressant medication is predicted by how their brain processes conflicting emotional information. 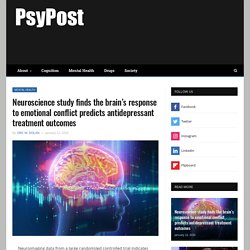 The findings have been published in Nature Human Behaviour. “This study addressed two questions central to the ability to meaningfully use biology to understand and guide psychiatric treatment and drug development,” said study author Amit Etkin, the founder and CEO of Alto Neuroscience as well as a professor at Stanford University. “One was whether there are identifiable biological differences between patients with depression that determine who responds to an antidepressant compared to a placebo. The second was what role emotion regulation plays in defining those biological attributes.” The researchers examined functional magnetic resonance imaging (fMRI) data from the EMBARC trial. How Adverse Childhood Experiences Affect You as an Adult. Source: Shutterstock In California, where I live and work as a sex and intimacy disorders specialist, there is a movement for mandatory adverse childhood experiences (ACES) assessment in all public and private medical and psychotherapeutic settings. 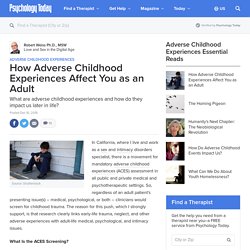 So, regardless of an adult patient’s presenting issue(s) – medical, psychological, or both – clinicians would screen for childhood trauma. The reason for this push, which I strongly support, is that research clearly links early-life trauma, neglect, and other adverse experiences with adult-life medical, psychological, and intimacy issues. article continues after advertisement. Choice page. Human Fear and Anxiety. This is the sixth in a series of posts related to my 2019 book, The Deep History of Ourselves: The Four-Billion-Year Story of How We Got Conscious Brains, which explores mind and behavior, in the context of the very long history of life on earth.

Other related posts can be found by visiting my blog, I Got a Mind to Tell You. article continues after advertisement. Can Biology Class Reduce Racism? Taylor, who had downplayed the significance of race, eventually had to admit there were some proportionally small differences between population groups.

Many Genes Influence Same-Sex Sexuality, Not a Single ‘Gay Gene’ The researchers also looked at answers to other questions in the 23andMe survey, including people’s sexual identity and what gender they fantasized about. There, they found considerable genetic overlap between those results and whether people ever engaged in same-sex sex, suggesting that these aspects of sexual orientation share common genetics, they said. Dean Hamer, a former National Institutes of Health scientist who led the first high-profile study identifying a genetic link to being gay in 1993, said he was happy to see such a large research effort.

A Successful Artificial Memory Has Been Created. Choice page. The “Is Psychology a Science?” Debate. If one is a psychologist or even has a passing interest in the field, one has likely encountered the question about whether psychology is truly a science or not. Resources for the Teaching of Social Psychology - Home Page. YouTube Channel for Psychology Videos (including many social psychology videos) - Steven Ross has started an excellent compendium of video clips from movies, TV shows, advertisements, news programs, and other sources. Long-term memory forming mechanism discovered in mice. Your brain has its own box of memories. How stress echoes down the generations - Genetics.

THE effects of child abuse can last a lifetime. Neglected or abused children have a higher risk of developing all sorts of ailments as adults, including mental illnesses such as depression but also physical ones like cancer and stroke. In fact, the effects may last even longer. The mystery of screaming schoolgirls in Malaysia. Image copyright Joshua Paul for the BBC. What’s Up With That: Why It’s So Hard to Catch Your Own Typos. You have finally finished writing your article. 'I'm Still Dealing With It': How Two Veterans Are Learning To Cope With PTSD. Has humanity reached ‘peak intelligence’? - BBC Future. SAGE Journals: Your gateway to world-class journal research.

Optical illusion tricks your brain into seeing COLOURS in black and white picture. Your Attachment Style Influences the Success of Your Relationship. Parents’ emotional trauma may change their children’s biology. Studies in mice show how. Stanford prof who changed America with one study was also a liar.