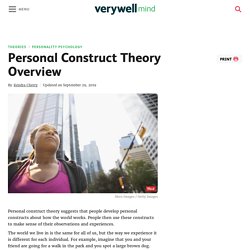 People then use these constructs to make sense of their observations and experiences. The world we live in is the same for all of us, but the way we experience it is different for each individual. For example, imagine that you and your friend are going for a walk in the park and you spot a large brown dog. You immediately see a graceful and adorable animal that you would like to pet.

Your friend, on the other hand, sees a threatening animal that she wants to avoid. According to psychologist George Kelly, personality is composed of the various mental constructs through which each person views reality. How Exactly Does Personal Construct Theory Work? Kelly believed that we start by first developing a set of personal constructs, which are essentially mental representations that we use to interpret events. What makes these constructs so important? How Do We Use Constructs? Observations.

Technology. A virtual therapist app is being used to treat people with depression. It’s no surprise that with NHS therapy waiting lists of up to two years, the prospect of digital healthcare is looking more attractive. 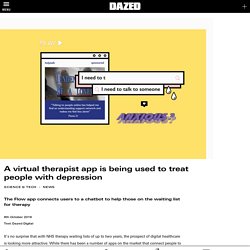 While there has been a number of apps on the market that connect people to licensed therapists, like Talkspace and BetterHelp, these apps are still fairly new, and some medical professionals have argued that there is not enough research to support them. But a group of scientists in Malmö, Sweden have created a government-approved virtual therapist (basically, a chatbot) that aims to help people struggling with their mental health while waiting to be seen by a medical professional.

Called Flow, the free app – created by a team of clinical psychologists – is allegedly based on current psychology and neuroscience research, and engages users in daily conversations, while offering self-help techniques, mood tracking features, meditation, mental exercises, and curated videos. Solid. This Map of NBA Fandom From Vivid Seats Is Also a Data-Driven Viral Marketing Strategy. In the heart of Alaska, there's a solid fanbase for the Miami Heat. 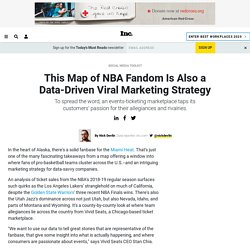 That's just one of the many fascinating takeaways from a map offering a window into where fans of pro-basketball teams cluster across the U.S. --and an intriguing marketing strategy for data-savvy companies. An analysis of ticket sales from the NBA's 2018-19 regular season surfaces such quirks as the Los Angeles Lakers' stranglehold on much of California, despite the Golden State Warriors' three recent NBA Finals wins. There's also the Utah Jazz's dominance across not just Utah, but also Nevada, Idaho, and parts of Montana and Wyoming. It's a county-by-county look at where team allegiances lie across the country from Vivid Seats, a Chicago-based ticket marketplace. "We want to use our data to tell great stories that are representative of the fanbase, that give some insight into what is actually happening, and where consumers are passionate about events," says Vivid Seats CEO Stan Chia.

Why We Should Embrace the Evolution of Communication. Recently, I received an email from a student with nothing more than a thumbs-up emoji. 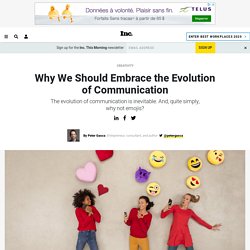 Upon receipt, it seemed terribly inappropriate, especially given that in my business classes, I underscore the importance of properly addressing people in a professional setting. I immediately typed an unapologetically terse response reiterating this point and emphasized that I was more than an instructor, I was also a potential business connection. In following a professional email strategy, I wrote the email and saved it to "drafts," where it would sit and allow me additional time to contemplate the situation and what I had written. The more I thought about it, however, the more I softened. The email was, in fact, a response to my simple call to action, and it said simply, "OK. " It was remarkably effective and efficient, and because I am inundated with countless long and menial emails every day, the resulting relief on time and stress was not lost on me. 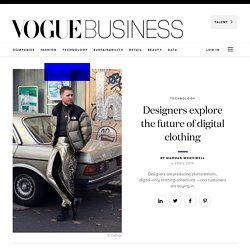 Digital tailors manipulated customer photos so it appeared that they were dressed in the apparel, which cost up to €30 per piece.Mobile games have already proved that customers are willing to spend money on digital assets. Glu Mobile’s Covet Fashion game generated $53.4 million in sales last year (a portion from advertising).While there are obvious opportunities for fashion brands, there are significant barriers to entry. Designers are traditionally unschooled in 3D modelling, sample patterns are not easily converted to 3D models and automated technologies are nascent. Looks from Carlings's digital collection. © Carlings Last November, Scandinavian multibrand retailer Carlings released its first digital clothing collection. The concept might seem outlandish, but gamers have been spending real money on digital fashion items for years. Carlings's Silverhood metallic track pants.