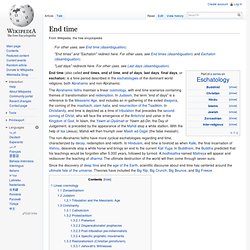 John Hick. John Harwood Hick (20 January 1922 – 9 February 2012) was a philosopher of religion and theologian born in England who taught in the United States for the larger part of his career. 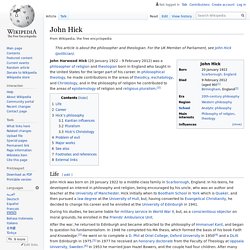 In philosophical theology, he made contributions in the areas of theodicy, eschatology, and Christology, and in the philosophy of religion he contributed to the areas of epistemology of religion and religious pluralism.[3] Life[edit] John Hick was born on 20 January 1922 to a middle-class family in Scarborough, England. In his teens, he developed an interest in philosophy and religion, being encouraged by his uncle, who was an author and teacher at the University of Manchester. Eternal oblivion. Consciousness permanently ceases upon death Eternal oblivion (also referred to as non-existence or nothingness)[1][2][page needed] is the philosophical or religious concept of one's consciousness permanently ceasing upon death. 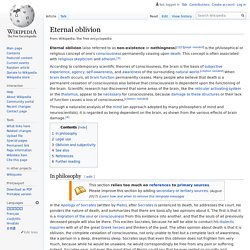 This concept is often associated with religious skepticism and atheism.[3] Afterlife. Ancient Egyptian papyrus depicting the journey into the afterlife. 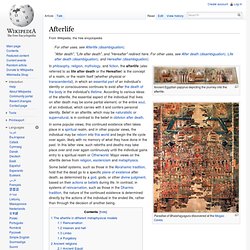 Why Do People Believe in Hell? Admittedly, much theological ink has been spilled over the years explaining away the plain meaning of those verses. 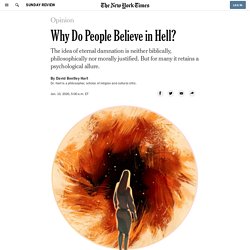 But it’s instructive that during the first half millennium of Christianity — especially in the Greek-speaking Hellenistic and Semitic East — believers in universal salvation apparently enjoyed their largest presence as a relative ratio of the faithful. Purgatory. Religious belief of Christianity, primarily Catholicism Purgatory (Latin: purgatorium, via Anglo-Norman and Old French)[1] is, according to the belief of some Christians (mostly Catholics), an intermediate state after physical death for expiatory purification.[2] There is disagreement among Christians whether such a state exists. 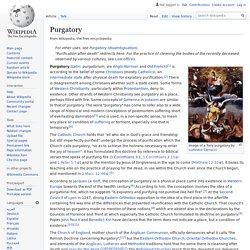 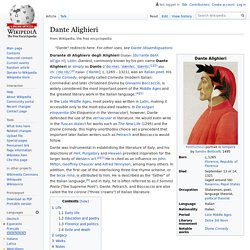 His Divine Comedy, originally called Comedìa (modern Italian: Commedia) and later christened Divina by Giovanni Boccaccio, is widely considered the most important poem of the Middle Ages and the greatest literary work in the Italian language.[4][5] In the Late Middle Ages, most poetry was written in Latin, making it accessible only to the most educated readers. In De vulgari eloquentia (On Eloquence in the Vernacular), however, Dante defended the use of the vernacular in literature. He would even write in the Tuscan dialect for works such as The New Life (1295) and the Divine Comedy; this highly unorthodox choice set a precedent that important later Italian writers such as Petrarch and Boccaccio would follow.

Life[edit] Early life[edit] Legacy[edit] What The Bible Really Says About Hell May Surprise You. Last Updated On November 12th, 2019 Let’s talk about hell. 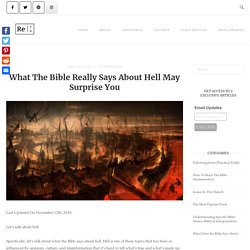 Specifically, let’s talk about what the Bible says about hell. Hell is one of those topics that has been so influenced by opinions, culture, and misinformation that it’s hard to tell what’s true and what’s made up. Many of us probably grew up picturing hell much like the picture above. But is that really what hell will be like? German Catholic Church Debates Sexuality, Celibacy and Women’s Roles. BERLIN — The Roman Catholic Church in Germany has a split identity.

At home, attendance is falling and many Germans say they regard the church’s teaching on social issues as hopelessly out of touch. But globally, the German church is one of the most powerful — and liberal — regions of the Catholic world, a player whose wealth and theological influence are now creating a challenge for the entire church. On Dec. 1, the German church’s international influence will be on display when its bishops begin a two-year-long series of meetings with lay leaders that will allow debate on hot-button issues that in many other corners of the church would be off limits, such as whether to accept homosexuality, end clerical celibacy and ordain women as priests.

The meetings carry no authority to actually change church doctrine. Moving through Grief: 11 Books to Guide the Way. Grief is a part of life, so goes the old saying. 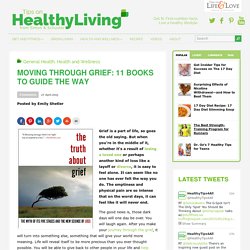 But when you’re in the middle of it, whether it’s a result of losing a loved one or perhaps another kind of loss like a layoff or divorce, it is easy to feel alone. It can seem like no one has ever felt the way you do. The emptiness and physical pain are so intense that on the worst days, it can feel like it will never end. The good news is, those dark days will one day be over. You will laugh again. These books are meant to be guides on your journey, helpful for remembering that no matter what you feel in one dark moment, you are not alone.

Live Like You Were Dying - Tim McGraw with lyrics. 12 Best Things About HELL. What do Atheists Believe Happens When we die? Is It Good That We Die? Should We Live Forever? Why Don't We Taxidermy People?