Negative and positive atheism. A diagram showing the relationship between the definitions of weak/strong and implicit/explicit atheism. 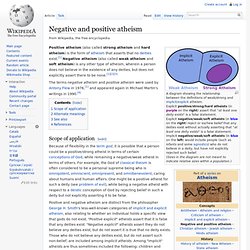 State atheism. Official promotion of atheism by a government World map showing nations that formerly or currently practice state atheism[26] Countries that formerly practiced state atheism Countries that currently practice state atheism In contrast, a secular state purports to be officially neutral in matters of religion, supporting neither religion nor irreligion.[38][39][27] In a review of 35 European states in 1980, only 5 states were considered 'secular' in the sense of religious neutrality, 9 were considered 'atheistic', and 21 states were considered 'religious'.[40] Communist states[edit] Lenin states: Religion is the opium of the people—this dictum by Marx is the corner-stone of the whole Marxist outlook on religion. 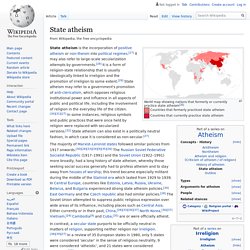 Although Marx and Lenin were both atheists,[44][45] several religious communist groups exist, including Christian communists.[46] Soviet Union[edit] Freedom From Religion Foundation. The Freedom From Religion Foundation (FFRF) is an American non-profit organization based in Madison, Wisconsin, with members from all 50 states, the District of Columbia, and Puerto Rico.[5] The largest[6] national organization advocating for non-theists, FFRF promotes the separation of church and state and educates the public on matters relating to atheism, agnosticism, and nontheism. 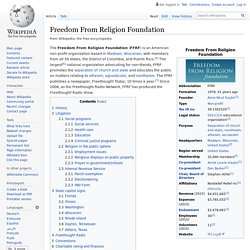 The FFRF publishes a newspaper, Freethought Today, 10 times a year.[7] Since 2006, as the Freethought Radio Network, FFRF has produced the Freethought Radio show. History[edit] Dan Barker introduces himself and the FFRF in London, July 2017. The FFRF was co-founded by Anne Nicol Gaylor and her daughter, Annie Laurie Gaylor, in 1976 and was incorporated nationally on April 15, 1978.[8][9] The organization is supported by over 19,000 members as of 2012[10] and operates from an 1855-era building in Madison, Wisconsin, that once served as a church rectory. Litigation[edit] The evolution of the anti-evolutionists. Sometimes I see a piece of scientific research that is so brilliant, so elegant, all I can do is sit back in awestruck appreciation. 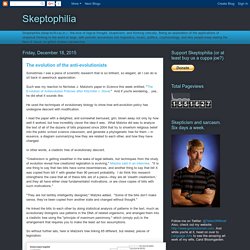 Such was my reaction to Nicholas J. Matzke's paper in Science this week entitled, "The Evolution of Antievolution Policies after Kitzmiller v. Dover. " And if you're wondering... yes, he did what it sounds like. He used the techniques of evolutionary biology to show how anti-evolution policy has undergone descent with modification. I read the paper with a delighted, and somewhat bemused, grin, blown away not only by how well it worked, but how incredibly clever the idea it was. In other words, a cladistic tree of evolutionary descent. "Creationism is getting stealthier in the wake of legal defeats, but techniques from the study of evolution reveal how creationist legislation is evolving," Matzke said in an interview. Why Atheists Care About YOUR Religion. A Few Things I've Learned About Creationists - PZ Myers -Skepticon 2 Redux. R.Dawkins, M.Kaku, WL Craig Full Debate - Does God Exist ? 1 of 2.