Climate change and its effects on health

What is Coral Bleaching and What Causes It - Fight For Our Reef. Gorgeous, delicate coral reefs are home to millions of fish and fundamental to our own survival. 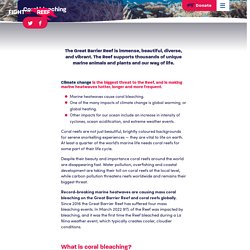 Coral bleaching is a global crisis, caused by increased ocean temperatures driven by carbon pollution. Climate change is the biggest threat to our Great Barrier Reef. The Reef needs our help while there’s still time. Coral reefs are not just beautiful, brightly coloured backgrounds for serene snorkelling experiences — they are vital to life on earth.

At least a quarter of the world’s marine life needs coral reefs for some part of their life cycle. Carbon pollution is warming our oceans and causing corals around the world to bleach. What is coral bleaching? The stunning colours in corals come from a marine algae called zooxanthellae, which live inside their tissues. When corals get stressed, from things such as heat or pollution, they react by expelling this algae, leaving a ghostly, transparent skeleton behind. Can coral recover from bleaching? How Does Climate Change Affect Coral Reefs? Climate Change Impacts on the Great Barrier Reef. How does climate change affect coral reefs? Climate change is the greatest global threat to coral reef ecosystems. 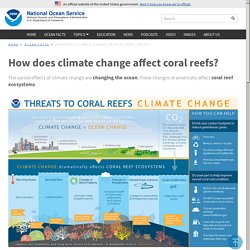 Scientific evidence now clearly indicates that the Earth's atmosphere and ocean are warming, and that these changes are primarily due to greenhouse gases derived from human activities. As temperatures rise, mass coral bleaching events and infectious disease outbreaks are becoming more frequent. Additionally, carbon dioxide absorbed into the ocean from the atmosphere has already begun to reduce calcification rates in reef-building and reef-associated organisms by altering seawater chemistry through decreases in pH. 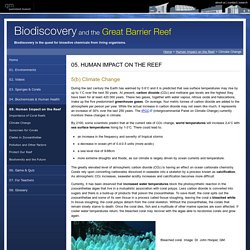 At present, carbon dioxide (CO2) and methane gas levels are the highest they have been for at least 420 000 years. These two gases, together with water vapour, nitrous oxide and halocarbons, make up the five predominant greenhouse gases. On average, four metric tonnes of carbon dioxide are added to the atmosphere per person per year. While the actual increase in carbon dioxide may not seem like much, it represents an increase of 30% over the last 250 years. By 2100, some scientists predict that at the current rate of CO2 change, world temperatures will increase 2-4˚C with sea surface temperatures rising by 1-3˚C. The greatly elevated level of atmospheric carbon dioxide (CO2) is having an effect on ocean carbonate chemistry. 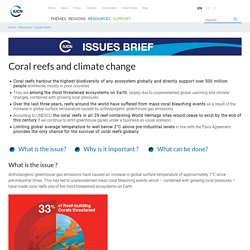 This has led to unprecedented mass coral bleaching events which – combined with growing local pressures – have made coral reefs one of the most threatened ecosystems on Earth. Photo: One third of reef-building corals around the world are threatened with extinction. © IUCN 2015 When conditions such as the temperature change, corals expel the symbiotic algae living in their tissues, responsible for their colour. A spike of 1–2°C in ocean temperatures sustained over several weeks can lead to bleaching, turning corals white. If corals are bleached for prolonged periods, they eventually die. Reefs around the world have suffered from mass bleaching events for three consecutive years. Photo: Bleached corals in the Seychelles. © Christophe Mason-Parker, Archipelago Images. 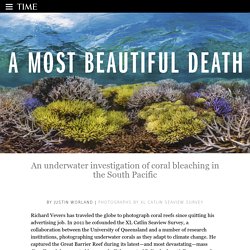 In 2011 he cofounded the XL Catlin Seaview Survey, a collaboration between the University of Queensland and a number of research institutions, photographing underwater corals as they adapt to climate change. The impact of climate change on the Great Barrier Reef - The Economist explains. THE Great Barrier Reef stretches some 2,300 km down Australia’s north-east coast, covering an area the size of Italy. 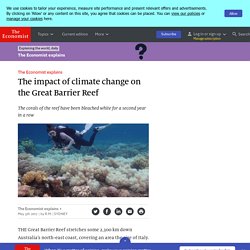 It is home to about 600 types of coral and 1,625 species of fish. UNESCO calls it a “site of remarkable variety and beauty”. That may not last. For the second consecutive year, expanses of coral have lost the vivid colours that draw thousands of annual sightseers. Instead, they have bleached a deathly white. In the 36 years since the reef was declared a World Heritage Area, mounting stresses from human activity have left it struggling. Get our daily newsletter Upgrade your inbox and get our Daily Dispatch and Editor's Picks. Under prolonged stress corals can expel algae, causing them to starve and die. Two years ago UNESCO was concerned enough about the reef’s health to consider adding it to the short list of world heritage sites in danger. 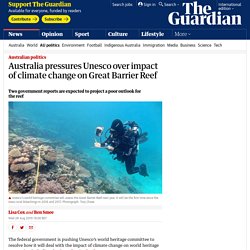 It comes ahead of the release of two government reports that are expected to project a poor outlook for the reef, the status of which will be reassessed by Unesco next year after previously avoiding an in danger listing. The world heritage committee has been reviewing its climate change policy and how countries should manage the impact of the climate crisis on the world heritage system. At a meeting of the committee in July, Australian representatives said climate change should not be used as the basis for an in danger listing for world heritage properties.

Climate change - Great Barrier Reef Foundation. Increased frequency of severe weather events More intense cyclones can destroy and weaken the reef structure.More extreme rainfall events will send more freshwater and sediment further out from the coast and on to the Reef. 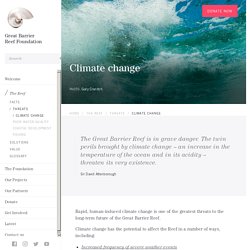 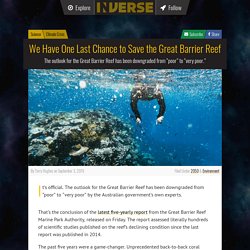 The outlook for the Great Barrier Reef has been downgraded from “poor” to “very poor” by the Australian government’s own experts. That’s the conclusion of the latest five-yearly report from the Great Barrier Reef Marine Park Authority, released on Friday. Amazon rainforest fires: an environmental catastrophe – in pictures. Amazon fires African fires climate change rainforest crisis. While the world has been shocked by the Amazon fires, across the Atlantic Ocean, similar blazes are burning across central Africa. 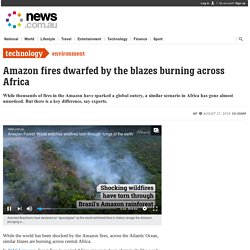 In NASA images, forest fires in central Africa appear to burn alarmingly like a red chain from Gabon to Angola. At the G7 summit this week, French President Emmanuel Macron tweeted about the central Africa fires and said nations were examining a similar initiative to the one proposed to combat Brazil’s blazes. G7 nations have pledged $20 million on the Amazon, mainly on fire-fighting aircraft.

Macron’s concern may be legitimate, but experts say central Africa’s rainforest fires are often more seasonal and linked to traditional seasonal farming methods. Media reaction: Amazon fires and climate change. In recent weeks, tens of thousands of fires have been recorded across the Amazon rainforest, with dramatic images and statistics reported daily across the world’s media. Both the scale of the fires and the erratic response from Brazilian president Jair Bolsonaro have garnered attention, with politicians, newspapers and commentators all weighing in on how events are playing out.

In this article, Carbon Brief looks back at how the fires and their underlying causes have been reported, as well as the impacts of the fires and the reaction to them. The summary is split into five sections: Forest ablaze The Amazon rainforest sees fires all year round. On Tuesday 20 August, Brazil’s space agency released data showing that the country as a whole had seen 74,000 fires so far this year, the Hill reported. Wildfire spreads across parts of the Amazon rainforest, near the Porto Velho region, 24 August 2019.

The Amazon in Brazil is on fire - how bad is it? Image copyright Amnesty International Thousands of fires are ravaging the Amazon rainforest in Brazil - the most intense blazes for almost a decade. The northern states of Roraima, Acre, Rondônia and Amazonas have been particularly badly affected. Amazon rainforest fires: What caused them and why activists are blaming Brazil’s president. The Amazon rainforest, the vessel holding a massive amount of the world’s oxygen, is burning at a rate scientists have never seen before. The National Institute for Space Research (INPE) has recorded more than 74,000 fires so far this year – an 84 per cent increase on the same period in 2018.

It’s the highest number since records began in 2013. In comparison, 40,136 fires burned in the region last year. The second-worst year was 2016, with 68,484 fires. READ MORE: Sao Paulo shrouded in darkness as Amazon rainforest continues to burn. The health impacts of climate change and why calls for action are growing louder - Health - ABC News. We tend to think about climate change as an environmental problem. But it's the impending impacts on our health that have medical experts sounding the alarm. Last November, planetary health professor Tony Capon co-authored the first national report to track Australia's progress on climate change and human health.

"When we understand the connections between climate change and human health, it makes it clear that this is urgent," Professor Capon said. Since then, calls for climate action from health bodies and medical professionals have grown louder. Amazon fires: deforestation has a devastating heating impact on the local climate – new study. The Amazon is under threat from all sides. Over recent weeks, unprecedented blazes have spread through an ecosystem not adapted to fire.

Much has been made of the consequences of these fires for global heating – but at a local level, the effects could be even more severe. The Amazon in Brazil is on fire - how bad is it? How Deforestation Affects Climate Change, Humans and Animals? The impact of Amazonian deforestation on Amazon basin rainfall - Spracklen - 2015 - Geophysical Research Letters. Deforestation of amazon forest and effects on climate and health.

Deforestation in Amazon rainforest since 1970 by News Australia. Climate change is affecting our health. What Is Climate Change? Climate change and health. Climate change and health. 5 Ways Climate Change Will Affect You: Health Risks. Power outages in extreme weather could cripple hospitals and transportation systems when we need them most.Crop declines could lead to undernutrition, hunger, and higher food prices. More CO2 in the air could make staple crops like barley and soy less nutritious.Occupational hazards such as risk of heatstroke will rise, especially among farmers and construction workers. Labor could shift to dawn and dusk, times when more disease-­carrying insects are out.Hotter days, more rain, and higher humidity will produce more ticks, which spread infectious diseases like Lyme disease.

People's Climate March: thousands demand action around the world - as it happened. Emma Thompson, who has recently returned from a trip to the Arctic with Greenpeace, has been talking to Andrew Marr on the BBC. All topics from climate change to conservation. Department of the Environment and Energy. Australia-is-a-global-top10-deforester-and-queensland-is-leading-the-way-20171120-gzopb7.