Lines of Spines. If you ask Google Images what a library is, you’ll get a very clear answer: books on shelves in a column-faced building. 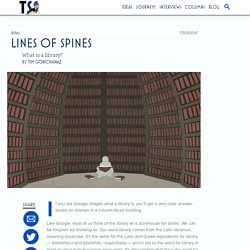 Like Google, most of us think of the library as a storehouse for books. We can be forgiven for thinking so. Our word library comes from the Latin librarium, meaning bookcase. It’s the same for the Latin and Greek equivalents for library — bibliotheca and bibliothiki, respectively — which led to the word for library in most modern Indo-European languages. It’s also notable that the Latin word for book, liber, originally referred to the kind of bark that was used in book construction. This being the case, we tend to paint libraries as havens for book lovers.

If a library is just where a society keeps its books, then it’s easy to see why many people no longer perceive libraries as relevant. It’s no secret that libraries are struggling. As a culture, we seem reluctant to admit the breadth and depth of what libraries offer. Library at SEMS - 10 Ways to Feed Your Library Instagram.

“In my view, you can’t call yourself a school if you don’t have a library" On the 27th February, Children’s Laureate Chris Riddell and CILIP CEO Nick Poole visited the Department for Education to meet with Schools Minister Nick Gibb MP and discuss the vital role of school libraries and librarians across the full spectrum of formal and informal learning and support in schools. 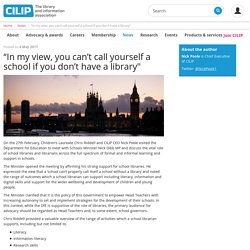 The Minister opened the meeting by affirming his strong support for school libraries. He expressed the view that a ‘school can’t properly call itself a school without a library’ and noted the range of outcomes which a school librarian can support including literacy, information and digital skills and support for the wider wellbeing and development of children and young people.

The Minister clarified that it is the policy of this Government to empower Head Teachers with increasing autonomy to set and implement strategies for the development of their schools. Why Gen Z needs librarians now more than ever. [Editor’s Note: This story is Part 2 of our month-long series on “What it means to teach Gen Z.” 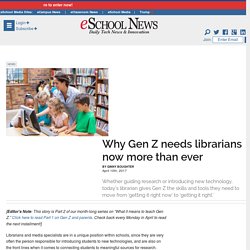 Click here to read Part 1 on Gen Z and parents. Check back every Monday in April to read the next installment!] Librarians and media specialists are in a unique position within schools, since they are very often the person responsible for introducing students to new technologies, and are also on the front lines when it comes to connecting students to meaningful sources for research. Historic GIFs wot I did – ART + marketing. I spent just over a year at the Bodleian being sassy on social media and making GIFs out of centuries-old collections. 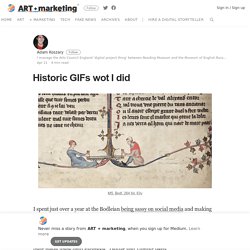 The animation of the Bodleian’s collections lent them new life. Beautiful images painstakingly made by monks and illustrators hundreds of years ago leapt from their pages anew onto Facebook, Twitter and Tumblr feeds. At times I thought that altering these images verged on the sacrilegious, but their animation brought them more attention than they ever would have if they remained static. 10 Reasons Librarians Are More Important Than Ever. It's National Library Week, and we couldn't resist paying homage to one of the most important members of the school community: librarians. 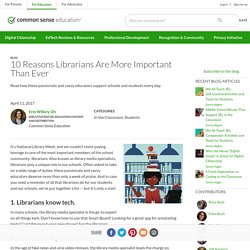 Also known as library media specialists, librarians play a unique role in our schools. Often asked to take on a wide range of duties, these passionate and savvy educators deserve more than only a week of praise. And in case you need a reminder of all that librarians do for our students and our schools, we've put together a list -- but it's only a start. 1. Librarians know tech. In many schools, the library media specialist is the go-to expert on all things tech. 2. Atlasobscura. When the writer Deborah Fallows toured smaller and midsize communities in the United States in 2016, she made sure to make the same stop in every city and town: the local public library. 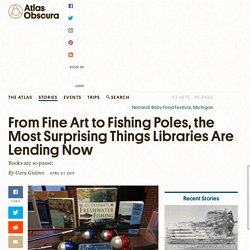 Libraries were never just plain old book-lenders, she learned, and they certainly aren’t now. Most provide residents with internet access, educational opportunities, and even refuge during times of meteorological or civic crisis. They use their archives to hold onto local history, and their programming and decor to reflect a vision of the future. A town or city’s Main Street or Chamber of Commerce reveals its body politic, writes Fallows, but “the visit to the public library reveal[s] its heart and soul.” America’s Most Beautiful Libraries. Photographer Thomas R. 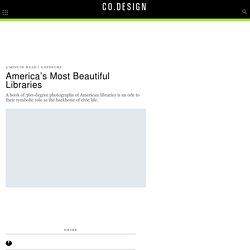 Schiff’s obsession with libraries began over 20 years ago. “I became fascinated by how the history of the United States is reflected in our civic buildings; how the great old libraries on the East Coast, of two centuries ago, evolved into dynamic, contemporary public spaces like the Seattle Public Library, or the Salt Lake City library,” he writes in The Library Book (Aperture, 2017), a new monograph featuring panoramic images of over 100 American libraries. 12 Insta Easy Instagram Library & Literacy Promotion Ideas. What’s the point of Instagram and why should you spend your precious time and money on it? Well, don’t worry about the cost, because it’s FREE! So, all you really need is creativity and a few minutes a day to make meaningful, fun, and lasting connections with your community. And with Instagram you get a twofer! Even maybe a threefer, fourfer?! Library Hand, the Fastidiously Neat Penmanship Style Made for Card Catalogs.

In September 1885, a bunch of librarians spent four days holed up in scenic Lake George, just over 200 miles north of New York City. 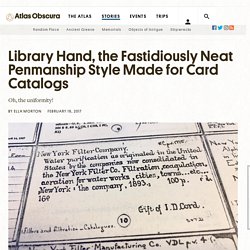 In the presence of such library-world luminaries as Melvil Dewey—the well-organized chap whose Dewey Decimal System keeps shelves orderly to this day—they discussed a range of issues, from the significance of the term “bookworm” to the question of whether libraries ought to have a separate reference-room for ladies. They then turned their attention to another crucial issue: handwriting. As libraries acquired more books, card catalogs needed to expand fast in order to keep track of them. Though the newly invented typewriter was beginning to take hold, it took time and effort to teach the art of “machine writing.” Librarians still had to handwrite their catalog cards.

Why we need Libraries and Teacher Librarians. The Public Library: A Photographic Love Letter to Humanity’s Greatest Sanctuary of Knowledge, Freedom, and Democracy. “A library is many things,” E.B. 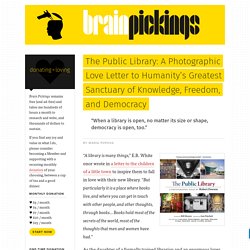 Public In/Formation. The modern library: Call me weird, but can we have some quiet in here? The walls of the La Trobe Reading Room in the State Library are made of books; red spines, blue spines, green spines, loudmouthed titles in silvery fonts. 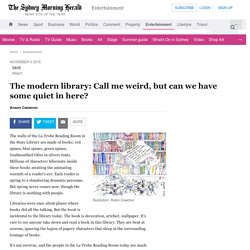 Millions of characters hibernate inside these books awaiting the animating warmth of a reader's eye. Each reader is spring to a slumbering dramatis personae. But spring never comes now, though the library is seething with people. Libraries were once silent places where books did all the talking. Watch 52,000 books reshelved in two minutes at New York public library – timelapse video. Library Desk Made from Recycled Books (4 pics) Whoever thought of this idea is pretty bright... After a devastating fire in the Architecture building burned down a portion of the library, Delft University of Technology in the Netherlands purchased a new collection to replace the old volumes. Instead of throwing away the old, unburned books, they stacked them up to create this awesome administrative desk, which they appropriately placed in the library. photo credit: Ellen Forsyth via inhabitat Email me when people comment –

The Fierce, Forgotten Library Wars of the Ancient World. An artistic interpretation of the Library of Alexandria based on archaeological evidence by O. Von Corven. (Photo: Public Domain) Businessinsider.com. Collaborative Learning. SLAV Conference 16th Aug 2016 (with images, tweets) · BiblioKat. The Strange Affliction of 'Library Anxiety' and What Librarians Do to Help. Don't be afraid. (Photo: timetrax23/CC BY-SA 2.0) In a few short weeks, bright-eyed college freshmen will be ambling onto campuses and into their first lectures. Which means a whole lot of newly minted undergrads are about to get freaked out by their on-campus libraries. Library anxiety is real. The phenomenon, which involves feeling intimidated, embarrassed, and overwhelmed by libraries and librarians, was first identified by Constance A. My top five skills for future proofing a librarian's employment opportunities.

Some are anxious that every professional decision they make will determine their future career success - or failure. Others feel completely trapped, but have stayed so long that they don't have the skills to move to another sector. AASL_Infographic_FINAL.pdf. New York's Library Hotel inspired by Dewey Decimal system. We are teacher librarians. We teach library lessons. #perception #librarymyths. “Oh, teacher librarian? The Hushed Interiors of 19th Century Libraries. Main reading room, the New York Public Library, c. 1910. Weeding the Worst Library Books. Last summer, in Berkeley, California, librarians pulled roughly forty thousand books off the shelves of the public library and carted them away. The library’s director, Jeff Scott, announced that his staff had “deaccessioned” texts that weren’t regularly checked out.

Do You Suffer from Library Anxiety? Gillian S. Top Skills for Tomorrow’s Librarians. How libraries can save the Internet of Things from the Web's centralized fate / Boing Boing. Everyone thinks libraries have a positive role to play in the world, but that role differs greatly based on whether you’re talking to a librarian or a patron. Ask a patron what libraries have in common and they’d probably answer: they share books with people. The Impact of the Great School Libraries: Report 2016.

Download the report - pdf. Australia's Great School Libraries - Honours List. An initiative of the American Library Association. Designed to increase public awareness of the value, impact and services provided by libraries and library professionals, the Libraries Transform campaign will ensure there is one clear, energetic voice for our profession. New Libraries matter: 15 fantastic library infographics. 3 Secrets to Making Your School Library the Place to Be. The Library Mixtape: “Sexiest librarian, take of those glasses…”