Related Articles:Chaos erupts in Parliament with EFF at the helm

EFF refuses to be dressed in old western attire in parliament:Tuesday 13 May 2014. Parliament says while there are no hard and fast rules about dress code for MPs in the chambers and committees, there is a need to observe the decorum of the institution. 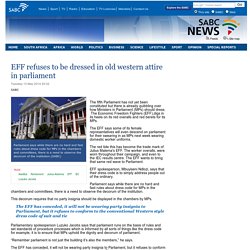 (SABC) The fifth Parliament has not yet been constituted but there is already quibbling over how Ministers in Parliament (MPs) should dress. The Economic Freedom Fighters (EFF),digs in its heels on its red overalls and red berets for its MPs. The EFF says some of its female representatives will even descend on parliament for their swearing in as MPs next week wearing domestic worker uniforms.

The red tide this has become the trade mark of Julius Malema's EFF. EFF spokesperson, Mbuyiseni Ndlozi, says that their dress code is to simply address people out of the ordinary. Parliament Committee to decide fate of 20 EFF MPs :Sunday 2 November 2014. EFF members disrupted Parliamentary proceedings in August. 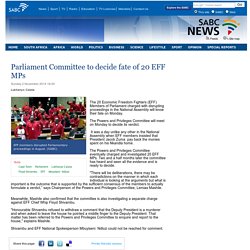 (SABC) The 20 Economic Freedom Fighters (EFF) Members of Parliament charged with disrupting proceedings in the National Assembly will know their fate on Monday. The Powers and Privileges Committee will meet on Monday to decide its verdict. It was a day unlike any other in the National Assembly when EFF members insisted that President Jacob Zuma pay back the monies spent on his Nkandla home.

The Powers and Privileges Committee eventually charged and investigated 20 EFF MPs. "There will be deliberations, there may be contradictions on the manner in which each individual is looking at the arguments but what is important is the outcome that is supported by the sufficient consensus of the members to actually formulate a verdict,” says Chairperson of the Powers and Privileges Committee, Lemias Mashile.

Meanwhile, Mashile also confirmed that the committee is also investigating a separate charge against EFF Chief Whip Floyd Shivambu. Ramaphosa to meet political parties over chaos in parliament :Monday 17 November 2014. EFF looks to court to stop Parliament sanctions:Friday 19 December 2014. The EFF MPs are seeking an urgent interdict against the sanctions that Parliament has implemented. 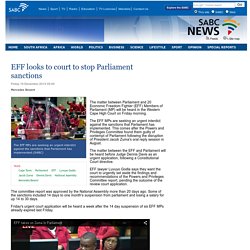 (SABC) The matter between Parliament and 20 Economic Freedom Fighter (EFF) Members of Parliament (MP) will be heard in the Western Cape High Court on Friday morning. The EFF MPs are seeking an urgent interdict against the sanctions that Parliament has implemented. This comes after the Powers and Privileges Committee found them guilty of contempt of Parliament following the disruption of President Jacob Zuma's oral reply session in August. 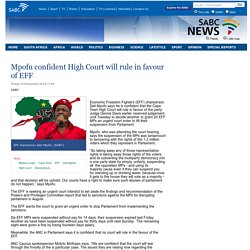 (SABC) Economic Freedom Fighters (EFF) chairperson Dali Mpofu says he is confident that the Cape Town High Court will rule in favour of the party. Judge Dennis Davis earlier reserved judgement until Tuesday to decide whether to grant 20 EFF MPs an urgent court order to lift their suspension from Parliament. Mpofu, who was attending the court hearing, says the suspension of the MPs was tantamount to tampering with the rights of the 1.2 million voters which they represent in Parliament. “So taking away any of those representative rights is taking away those rights of the voters and its subverting the multiparty democracy into a one party state by simply, unfairly, suspending all the opposition MPs - and using its majority cause even if they can suspend you for standing up or drinking water, because once it gets to the house they will vote as a majority - and that decision will be upheld. 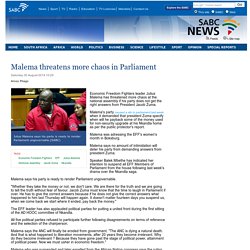 (SABC) Economic Freedom Fighters leader Julius Malema has threatened more chaos at the national assembly if his party does not get the right answers from President Jacob Zuma. Malema's party caused a stir in parliament last week when it demanded that president Zuma specify when will he payback some of the money used for non-security upgrade at his Nkandla home as per the public protector's report. Malema was adressing the EFF's women's month in Boksburg. Malema says no amount of intimidation will deter his party from demanding answers from president Zuma. Speaker Balek Mbethe has indicated her intention to suspend all EFF Members of Parliament from the house following last week's drama over the Nkandla saga.

Malema says his party is ready to render Parliament ungovernable. "Whether they take the money or not, we don't care. Malema says the ANC will finally be eroded from government. Click below to hear his statement. EFF looks to court to stop Parliament sanctions:Friday 19 December 2014. Mbete heckled in parliament as chaos erupts:Thursday 13 November 2014. "You must go" MPs chanted to Speaker, Baleka Mbete. 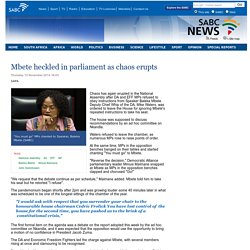 (SABC) Chaos has again erupted in the National Assembly after DA and EFF MPs refused to obey instructions from Speaker Baleka Mbete. Deputy Chief Whip of the DA, Mike Waters, was ordered to leave the House for ignoring Mbete's repeated instructions to take his seat. The house was supposed to discuss recommendations by an ad hoc committee on Nkandla. Waters refused to leave the chamber, as numerous MPs rose to raise points of order. At the same time, MPs in the opposition benches banged on their tables and started chanting "You must go" to Mbete. "Reverse the decision," Democratic Alliance parliamentary leader Mmusi Maimane snapped at Mbete as MPs in the opposition benches clapped and chorused "Go! " "We request that the debate continue as per schedule," Maimane added. The pandemonium began shortly after 2pm and was growing louder some 40 minutes later in what was scheduled to be one of the longest sittings of the chamber of the year. 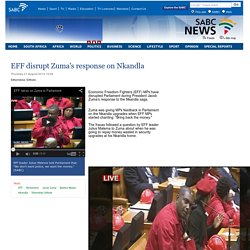 (SABC) Economic Freedom Fighters (EFF) MPs have disrupted Parliament during President Jacob Zuma’s response to the Nkandla saga. Zuma was giving MPs feedback in Parliament on the Nkandla upgrades when EFF MPs started chanting: "Bring back the money. " The fracas followed a question by EFF leader Julius Malema to Zuma about when he was going to repay money wasted in security upgrades at his Nkandla home.

The National Speaker, Baleka Mbethe then threatened to call security to eject the EFF MPs from the House. Earlier, Zuma told Parliament he had already responded in his report to the question of whether he would pay back any money spent on Nkandla. Public Protector Thuli Madonsela urged Zuma to consider paying back what he thought would be an appropriate amount.