A Year After Ferguson, Housing Segregation Defies Tools to Erase It. Photo ST. 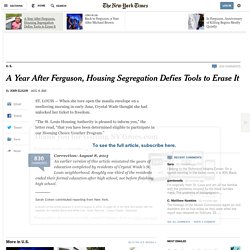 Study: Prisons Are Crueler in States With Large Black Communities. With a population of 2.4 million people behind bars, the United States is the incarceration capital of the world. 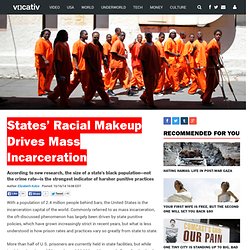 Commonly referred to as mass incarceration, the oft-discussed phenomenon has largely been driven by state punitive policies, which have grown increasingly strict in recent years, but what is less understood is how prison rates and practices vary so greatly from state to state. More than half of U.S. prisoners are currently held in state facilities, but while Louisiana imprisons 858 people per 100,000 residents and allows for the death penalty, Maine imprisons only 133 and abolished executions in 1887. So the question is: What makes one state act tougher on crime, and therefore become a greater contributor to mass imprisonment, than another?

According to research by Rice University, the answer comes down to race. Sixty percent of the U.S. prison population is black and 1 in 3 face a life sentence, as opposed to just 1 in 17 imprisoned white men. Angry Letters to the One Member of Congress Who Voted Against the War on Terror. Barbara Lee was the lone dissenter in the post-9/11 vote authorizing military force. 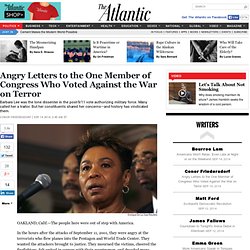 Many called her a traitor. But her constituents shared her concerns—and history has vindicated them. Enrique De La Osa/Reuters. Ferguson: The Coming Race War Won’t Be About Race. The Gratuitous Injustice of American Tipping Culture. Spitting, Stalking, Rape Threats: How Gun Extremists Target Women. Lack of Order: The Erosion of a Once-Great Force for Integration. For decades, federal desegregation orders were the potent tool that broke the back of Jim Crow education in the South, helping transform the region's educational systems into the most integrated in the country. 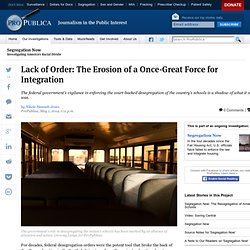 Federal judges, often facing down death threats and violence, blanketed Southern states with hundreds of court orders that set out specific plans and timetables to ensure the elimination of racial segregation. Federal agencies then aggressively used the authority of the courts to monitor hostile school systems, wielding the power of the 1964 Civil Rights Act to strip federal dollars from districts that refused to desegregate. Linda Taylor, welfare queen: Ronald Reagan made her a notorious American villain. Linda Taylor’s other sins were far worse. Ronald Reagan loved to tell stories. 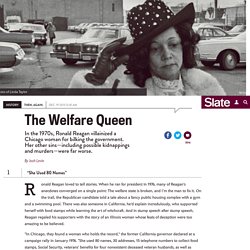 When he ran for president in 1976, many of Reagan’s anecdotes converged on a single point: The welfare state is broken, and I’m the man to fix it. On the trail, the Republican candidate told a tale about a fancy public housing complex with a gym and a swimming pool. There was also someone in California, he’d explain incredulously, who supported herself with food stamps while learning the art of witchcraft. And in stump speech after stump speech, Reagan regaled his supporters with the story of an Illinois woman whose feats of deception were too amazing to be believed. “In Chicago, they found a woman who holds the record,” the former California governor declared at a campaign rally in January 1976. Ten Years After 9/11. Nightmare in Maryville: Teens’ sexual encounter ignites a firestorm against family. Toward a Non-Binary Discussion of Race: Thoughts on Trayvon Martin, George Zimmerman, and Dzhokhar Tsarnaev. The killing of Trayvon Martin moved me, like so many other Black people, to my core. 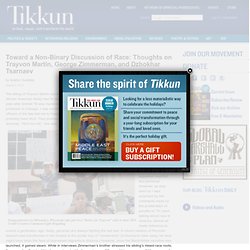 It seemed that every African American family had its tale. Majority Views NSA Phone Tracking as Acceptable Anti-terror Tactic. Public Says Investigate Terrorism, Even If It Intrudes on Privacy Overview A majority of Americans – 56% – say the National Security Agency’s (NSA) program tracking the telephone records of millions of Americans is an acceptable way for the government to investigate terrorism, though a substantial minority – 41% – say it is unacceptable. 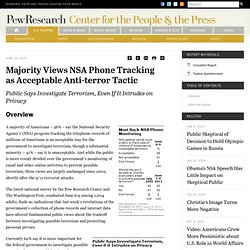 And while the public is more evenly divided over the government’s monitoring of email and other online activities to prevent possible terrorism, these views are largely unchanged since 2002, shortly after the 9/11 terrorist attacks. The latest national survey by the Pew Research Center and The Washington Post, conducted June 6-9 among 1,004 adults, finds no indications that last week’s revelations of the government’s collection of phone records and internet data have altered fundamental public views about the tradeoff between investigating possible terrorism and protecting personal privacy. Public Divided Over Internet Monitoring.

Weddady's Free Arabs, American Islamic Congress and the pro-Israel funders who helped them rise. On 18 April, three days after a bombing killed three and left many more wounded at the Boston marathon, a figure unknown to most Americans stepped suddenly into the national spotlight. 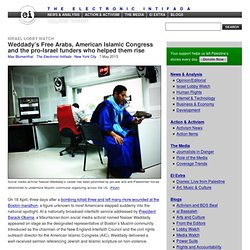 At a nationally broadcast interfaith service addressed by President Barack Obama, a Mauritanian-born social media activist named Nasser Weddady appeared on stage as the designated representative of Boston’s Muslim community. Introduced as the chairman of the New England Interfaith Council and the civil rights outreach director for the American Islamic Congress (AIC), Weddady delivered a well-received sermon referencing Jewish and Islamic scripture on non-violence. Unlike the notable Jewish, Catholic, Greek Orthodox and Protestant religious figures chosen to speak at the service, Weddady was not an ordained clergy member, nor was he known to many members of the community he claimed to represent. Disturbing history.

'There's No Turning Back': My Interview With a Hunted American Jihadist. Omar Hammami grew up in the deep south, in a town called Daphne, near Mobile. 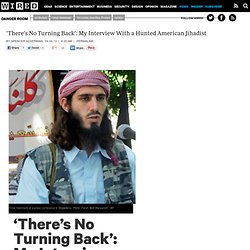 Born in 1984 to a Syrian Muslim immigrant father and a white Protestant mother, he was raised as a Christian, and described himself in his 2012 online autobiography as “a social butterfly” and “the most popular guy in school.” Hammami began to feel culturally adrift as a teenager, especially as he began to explore his Islamic heritage, a process outlined in a riveting 2010 New York Times Magazine piece. By the time he was in tenth grade, a kid who used to dress like a suburban skater “began to feel that I was being flung into an ocean and being asked not to get wet,” he would later write. Inequality and the Marketplace of Ideas - Ta-Nehisi Coates. Above, I make the case that to conceive of white supremacy as a product of the Republican Party is wrong, and that it is better to think of white supremacy as one of the most powerful and attractive notions in our long history. 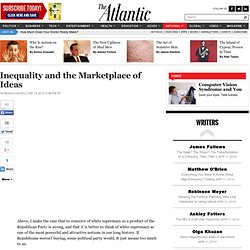 If Republicans weren't buying, some political party would. It just means too much to us. A lot of this comes from my many discussions here with you. I don't quite know how to recap them all. I know that this Edmund Morgan post on his book (which you should read right now) American Slavery, American Freedomis part of it: Morgan's basic contention, one which I increasingly find convincing, is that American slavery made American freedom possible. I should admit that increasingly I am moving away from the "war" frame.

Hate Comes to Orange County. Frederick Douglass and Voter Fraud. Lockheed Campaign Cash Has Flowed to Members of House Panel Probing F-22 Problems. By JACOB WASHKURAK, JOHN PARKER and BEN FREEMAN When members of a House subcommittee convene today for a hearing on the troubled F-22 stealth fighter, they’ll have more in common than just an interest in the mysterious symptoms that caused some pilots to declare the plane unsafe to fly earlier this year. All but one of the 25 subcommittee members have received contributions in the current election cycle from individuals or political action committees associated with Lockheed Martin, the prime contractor on the F-22, according to a Project On Government Oversight (POGO) analysis of data from the Center for Responsive Politics. The one exception, Pennsylvania Republican Todd R.

Platts, is retiring from Congress. In a 2010 op-ed piece, he said that as always his campaign was being funded solely by contributions from individual citizens and that he refused to accept contributions from special-interest groups. They weren’t alone. Jennifer L. Rep. Rep. Follow @BenFreemanDC. A Guide to Mass Shootings in America. Update, December 2: See our ongoing coverage of the mass shooting in San Bernardino here; we will update this database as more details emerge.

Editor's note, October 2, 2015: We have updated this database with the mass shooting at Umpqua Community College in Oregon, in which nine were murdered and nine others wounded. The previous update was in July, with the attack at a military center in Chattanooga, Tennessee, which came a month after the one at a historic black church in Charleston, South Carolina.