Is The Bible More Violent Than The Quran? Why the Idea That Islam Promotes Intolerance of the LGBTQIA+ Community Is (Surprisingly) a Lie. Author’s Note: I am not Muslim myself. 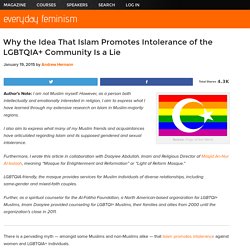 However, as a person both intellectually and emotionally interested in religion, I aim to express what I have learned through my extensive research on Islam in Muslim-majority regions. I also aim to express what many of my Muslim friends and acquaintances have articulated regarding Islam and its supposed gendered and sexual intolerance. Furthermore, I wrote this article in collaboration with Daayiee Abdullah, Imam and Religious Director of Masjid An-Nur Al-Isslaah, meaning “Mosque for Enlightenment and Reformation” or “Light of Reform Mosque.” LGBTQIA-friendly, the mosque provides services for Muslim individuals of diverse relationships, including same-gender and mixed-faith couples. Further, as a spiritual counselor for the Al-Fatiha Foundation, a North American-based organization for LGBTQI+ Muslims, Imam Daayiee provided counseling for LGBTQI+ Muslims, their families and allies from 2000 until the organization’s close in 2011. So, Why the Myth? 1. 10 Questions Somebody Should Ask Kim Davis and Those Who Support Her.

How Kim Davis’s Imprisonment Is A Win for Religious Liberty. How to Determine If Your Religious Liberty Is Being Threatened in Just 10 Quick Questions  It seems like this election season "religious liberty" is a hot topic. 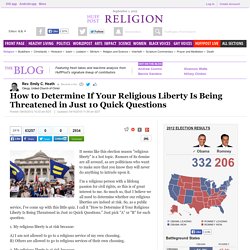 Rumors of its demise are all around, as are politicians who want to make sure that you know they will never do anything to intrude upon it. Politics of American churches & religions in one graph. *Note: This graphic is not available for republication. 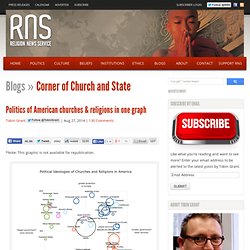 Update: Go here for chart featuring a drill down of Catholics; eight types added to graph. What are the political positions of religions and churches in America? This new graph maps the ideologies of 44 different religious groups using data comes from Pew’s Religious Landscape survey. This survey included 32,000 respondents. It asked very specific questions on religion that allow us to find out the precise denomination, church, or religion of each person. How to read the graph Each circle represents a denomination, church, or religion. The Meaning of True Love (from a Buddhist's Perspective). Did you ever fall in love with someone? 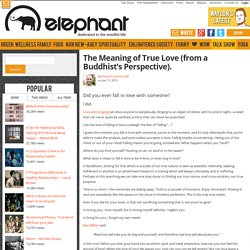 I did. Love and longing can drive anyone to perpetually clinging to an object of desire, with no end in sight—a need that can never quite be satisfied, a thirst that can never be quenched. Can the love of falling in love outweigh the fear of “falling”…? I guess the moment you fall in love with someone, you’re in the moment, and it’s only afterwards that you’re able to make the analysis, and even realize you were in love. Clobbering “Biblical” Gay Bashing. Thank you for your interest in Patheos newsletters! 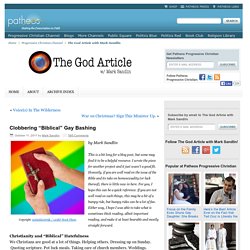 Please enter your email address below and click the "Subscribe" button. Thank you for your subscription. You can visit your Preference Center to complete your profile and see what else we have to offer. We apologize, we were unable to complete your subscription at this time, please try again later. If this error persists please contact us at communications@patheos.com. 10 Things THE CHURCH Can't Do While Following Jesus - Mark Sandlin. The Christian church is full of Christians, right? 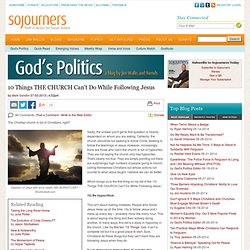 Depiction of Jesus with arms raised, WELBURNSTUART / Shutterstock.com. 10 MORE Things Churches Can’t Do While Following Jesus. Learning That Love Is The Way. 35 Founding Father quotes conservative Christians will hate. In honor of our presidents and our nation’s founding, here are 35 quotes from the Founding Fathers that prove they did NOT found a ‘Christian’ nation. 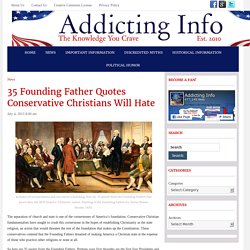 Painting of the Founding Fathers by Junius Brutus Steams, 1856. The separation of church and state is one of the cornerstones of America’s foundation. Conservative Christian fundamentalists have sought to crush this cornerstone in the hopes of establishing Christianity as the state religion, an action that would threaten the rest of the foundation that makes up the Constitution. These conservatives contend that the Founding Fathers dreamed of making America a Christian state at the expense of those who practice other religions or none at all.

So here are 35 quotes from the Founding Fathers. 1. 2. 4. 5. 6. If Our Founding Fathers Were All Christians, Why Did They Say This? Nobody can deny the fact that Christianity has played a huge role in our history. 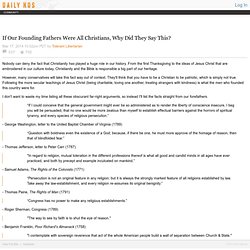 From the first Thanksgiving to the ideas of Jesus Christ that are embroidered in our culture today, Christianity and the Bible is responsible a big part of our heritage. Rev. Emily C. Heath: How to Determine If Your Religious Liberty Is Being Threatened in Just 10 Quick Questions. Why I am a Christian Democrat. Marriage According to the Bible [Infographic] Let me just mention that I am not against Christianity or against religion as a whole. 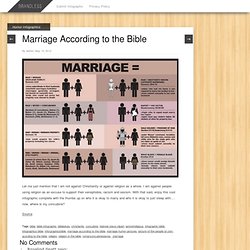 I am against people using religion as an excuse to support their xenophobia, racism and sexism. With that said, enjoy this cool infographic complete with the thumbs up on who it is okay to marry and who it is okay to just sleep with…. now, where is my concubine? Source. Do Atheists Pose a Threat to Morality?