Where in the Bible did God give Satan domain over the Earth? By Shawn Brasseaux Thank you for this question. 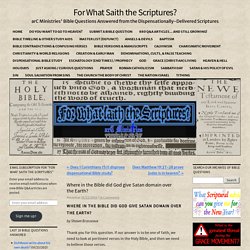 If our answer is to be one of faith, we need to look at pertinent verses in the Holy Bible, and then we need to believe those verses. ChrisTgeo.com - Yahweh Virus and Satanic Inversions of Gnosis. The Hidden Power And Other Lessons By Emmet Fox (Unabridged Audiobook) WHY ARE WE HERE? (II) - A Scary Truth Behind the Original Bible Story Part 2. Apophatic theology – What is it? Apophatic theology is a way to describe God by identifying what He is not. 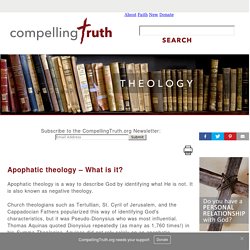 It is also known as negative theology. Church theologians such as Tertullian, St. Cyril of Jerusalem, and the Cappadocian Fathers popularized this way of identifying God's characteristics, but it was Pseudo-Dionysius who was most influential. Thomas Aquinas quoted Dionysius repeatedly (as many as 1,760 times!) In his Summa Theologica. C.S. (5) Dancing With Magic (Lies) Part Two Arthur Cristian Love For Life. Lecture: Buddha and Christ: The Sphere of the Bodhisattvas.

The Sphere of the Bodhisattvas In this lecture I want to speak of certain facts which belong essentially to the ethical and moral domain and help us to understand the mission of Spiritual Science in our time. 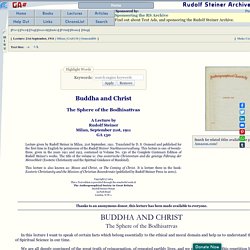 We are all deeply convinced of the great truth of reincarnation, of repeated earthly lives, and we must realise that this repetition has its own good purpose in the Earth's evolution. To the question, ‘Why do we reincarnate?’ Bloodline Of The Holy Grail. Today we shall embark upon the time-honoured Quest for the Holy Grail. 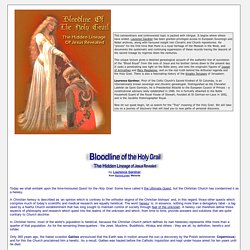 Some have called it the Ultimate Quest, but the Christian Church has condemned it as a heresy. A Christian heresy is described as ’an opinion which is contrary to the orthodox dogma of the Christian bishops’ and, in this regard, those other quests which comprise much of today’s scientific and medical research are equally heretical. The word ’heresy’ is, in essence, nothing more than a derogatory label - a tag used by a fearful Church establishment that has long sought to maintain control of society through fear of the unknown.

Bloodline of the Holy Grail - Jesus and Mary Magdalene - Sangreal. What Are the 9 Orders of Angels? How much do you know about angels? 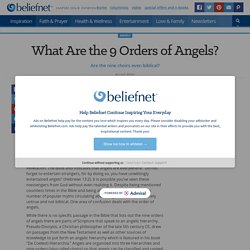 The Bible tells us, “[The Lord] will give His angels charge of you to protect you in all your ways” (Psalm 91:11). Angels are heavenly beings, superior to humans, who serve as messengers of God and guardians of human beings. The Bible plainly teaches that angels exist. There are more than 250 mentions of angels in Scripture from Genesis to Revelation. The Bible also indicates that angels are everywhere: “Do not forget to entertain strangers, for by doing so, you have unwittingly entertained angels” (Hebrews 13:2). Become an Ordained Minister – United National Ministry - Get Ordained Online.

Universallifechurch.com. The Hidden Teachings of Jesus. Dualism - As Above So Below - Order Out Of Chaos Explained. End Times: The HUNTERS are COMING (2018) WHEN you see what PHARAOH AKHENATEN means you'll MARVEL. Vegan Agenda-Bible Teachings- Clean and Unclean- Walter Veith □ What The Church Isn’t Telling You About Nibiru And The Anunnaki. By Gregg Prescott, M.S.Editor, In5D.com Silently, the Vatican is releasing information about Nibiru entering our solar system and extraterrestrial neighbors who have already met with Vatican officials but they are not telling you everything. 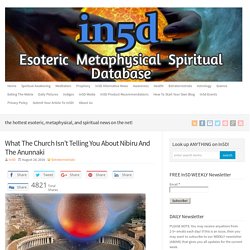 While the mainstream media remains conspicuously silent while detracting our attention to idiotic events such as Justin Beiber’s DUI, disclosure information has been slowly leaked by the Vatican, indicating the presence of extraterrestrials on, and visiting, our planet along with an incoming anomaly called Planet X and/or Nibiru.

The following testimonies confirm the Vatican’s knowledge of extraterrestrials and Nibiru: Religion needs to recognize extraterrestrials Pierre Lena, a French astrophysicist and member of the Pontifical Academy stated at a November 2009 Astrobiology Conference hosted by the Vatican,, “Astrobiology is a mature science that says very interesting things that could change the vision humanity has of itself. Dr. ET’s are already here. The Black Presence in the Bible: Uncovering the Hidden Ones. “Princes shall come out of Egypt; Ethiopia shall soon stretch out her hands unto God.” 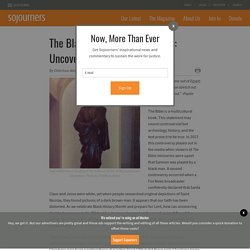 -Psalm 68:31 The Bible is a multicultural book. This statement may sound controversial but archeology, history, and the text prove it to be true. Meaning of the Number 3 in the Bible. The Meaning of Numbers: The Number 3 The number 3 is used 467 times in the Bible. 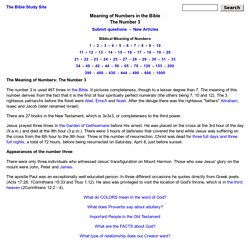 It pictures completeness, though to a lesser degree than 7. How Well Do You Know Religion? Donald Trump's proposal to bar Muslims from America may be a gift to ISIS recruitment and a grotesque echo of the sentiment behind the Chinese Exclusion Act and the internment of Japanese-Americans. 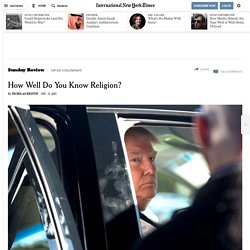 But, like those earlier spasms of exclusion, the Trump proposal has plenty of supporters. In one recent poll, more than three-quarters of Republicans said that Islam was incompatible with life in the United States. There’s a widespread perception in America that Islam is rooted in misogyny and violence, incorrigible because it is rooted in a holy text that is fundamentally different from others.

So here’s my quiz on religion. Some questions have more than one correct answer. Religion in the Age of Cyborgs, by Egil Asprem > The Religious Studies Project. Merlin Donald’s Big Thoughts on the evolution of culture offer opportunities to speculate about the place of religion in the natural history of our species – an opportunity most recently taken by Robert Bellah in his much discussed last book, Religion in Human Evolution: From the Paleolithic to the Axial Age (2011). 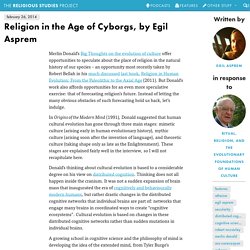 But Donald’s work also affords opportunities for an even more speculative exercise: that of forecasting religion’s future. Instead of letting the many obvious obstacles of such forecasting hold us back, let’s indulge. In Origins of the Modern Mind (1991), Donald suggested that human cultural evolution has gone through three main stages: mimetic culture (arising early in human evolutionary history), mythic culture (arising soon after the invention of language), and theoretic culture (taking shape only as late as the Enlightenment). These stages are explained fairly well in the interview, so I will not recapitulate here. The Saviour Programming: Keshe, Parkes, and Believe-ism. Saviour programming, a persistent theme in human behavior from ancient times. More recently, it has surfaced in the social corridors of the internet via an assortment of characters who either foretell, or (attempt to) fulfill the expectations of a desperate generation for the ONE who will end suffering and deliver Man into a “golden age”.

In the echoes of MU and Atlantis to Sumeria, Egypt, Babylonia, and the great western empires emerged a parade of figures from Quetzalquotal and Thoth to Prometheus and Zeus; Zarathustra to Buddha and Christ. The “program” runs in the human subconscious, borne of the uncertainty of Man’s origins, his endless states of need, war, and spirtual-psychological fragmentation. The “program” offers hopes of peace, healing, rebirth, and deliverance from Man’s demons, usually fronted by a singular charismatic figure who seizes the needs of the people as a focus for Universal “Salvation” and a New Age.

Scientology. Baha'i Faith. Baha’is believe in peace, justice, love, altruism and unity. The Baha’i teachings promote the agreement of science and religion, the equality of the sexes and the elimination of all prejudice and racism. Just about anywhere you go on the planet, you’ll find Baha’is—the Baha’i Faith is the world’s second-most widespread religion after Christianity, spanning the globe and working to unite it.

Baha’is have no clergy or churches, gathering together in democratically-led communities and welcoming everyone. The millions of Baha’is in the world come from every ethnicity, nationality, tribe, age, racial group, religious background and economic and social class. Gentle, peaceful, warm and welcoming, diverse Baha’i communities exist just about everywhere. How Did Baha’i History Begin? Tehran, the city where Baha’u’llah was born Founded by Baha’u’llah in 1863 in Persia, the Baha’i Faith has since spread to every region, continent and nation. Avestan, Iranian & Zoroastrian Languages. Related reading: » Avestan Manuscripts » Our page on Old Persian The languages of the Zoroastrian scriptures, the Avesta, and the Hindu scriptures, the Rig Veda, are classified by linguists as part of the Indo-Iranian family of languages.

The Franciscan Archive. Apophatic theology. Way of describing the divine by explaining what God is not Apophatic theology, also known as negative theology, is a form of theological thinking and religious practice which attempts to approach God, the Divine, by negation, to speak only in terms of what may not be said about the perfect goodness that is God. [web 1] It forms a pair together with cataphatic theology, which approaches God or the Divine by affirmations or positive statements about what God is.

[web 2] The apophatic tradition is often, though not always, allied with the approach of mysticism, which aims at the vision of God, the perception of the divine reality beyond the realm of ordinary perception. Etymology and definition[edit] "Apophatic", Ancient Greek: ἀπόφασις (noun); from ἀπόφημι apophēmi, meaning "to deny". 12 Worst Ideas Religion Has Unleashed on the World. 1. Chosen People The term “Chosen People” typically refers to the Hebrew Bible and the ugly idea that God has given certain tribes a Promised Land (even though it is already occupied by other people).

But in reality many sects endorse some version of this concept. The Emblem of Life. THEOSOPHY, Vol. 48, No. 9, July, 1960 (Pages 417-422; Size: 17K) THE EMBLEM OF LIFE(1) The great truth is One, while it can be seen in a thousand ways. NO symbol was ever adopted anciently which did not bear an androgynous significance as well as a sevenfold use. How Different religions view the Afterlife. Articles. Alternative Religions: History, Culture, and More. The Common Origin of Religions and Theology. 11th September 2015 By Ethan Indigo Smith Contributing Writer for Wake Up World.

Listing of official Denominational Web sites. Untitled. Some Definitions By using the terms "cult," "occult," and "New Age," Watchman Fellowship is in no way implying that the followers or leaders are necessarily evil or immoral people. It simply means that such groups seem to promote doctrine or practices which may be considered outside the realm of historic Christianity. Anunnaki Paper #2: Genesis or the "Genes of Isis"?

Now, given free hands by King Anu, Ea and Ningishzidda immediately continued their genetic experiments to create the "perfect worker". Before they even came close to the end result, they tried different options. True Equinox Not March 20! The Hermetic Teachings of Tehuti. Untitled. 3rd August 2008 | Draft problematic kataphatic identity vs. potential of apophatic identity? THEOLOGY/WORLD RELIGIONS/SYMBOLS. Why the Universe does not revolve around the Earth. Gematria. Forbidden History The Bloodline of Christ. Why Religion causes brain damage. 1500 Year Old Bible Confirms That Jesus Christ Was Not Crucified - Vatican In Awe - Sons on the Pyre - Alternative Electronica. 1500-2000 year old bible found in Ankara, Turkey. Michael Tsarion. Lucifer and deception through theology. Ican Planet 01-06-2011. Side By Side Comparison Lens. Gods and Religions on Planet Earth - Dioses y Religiones del Planeta Tierra. Sumerian religion. Songs of the soul gathered out of many lands and ages. : Prime, Samuel Irenaeus, 1812-1885.

Center for Christ Consciousness - Home. 'The Matrix Of Gog' ► Texe Marrs w/ Deagle 4.24.14. The Mark Of The Beast Is NOT A Microchip! Truth Or Tradition - Passion For Truth Ministries. Main. The Urantia Papers – The Urantia Book or The Fifth Epochal Revelation. The Dead Sea Scrolls: Book of Giants. Gregg Braden - The Lost Mode of Prayer - 1. *AGE OF DECEIT* (FULL) Fallen Angels and the New World Order. THE EXTRATERRESTRIAL GOD CONSTRUCT DECODED PART 1. Gods Of Eden - Religion & The Alien Gods - Red Ice Radio. How can Prayers from different religions to different Gods still get results? « Path of Enlightenment.