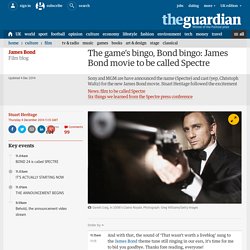 The Cadbury's Creme Egg scandal: how to stage a chocolate revolution. The increasingly uncomfortable world of British chocolate is in disarray again after Cadbury announced it was downsizing Creme Egg packs from six eggs to five and – here’s the kicker – reducing the price by just 20p. 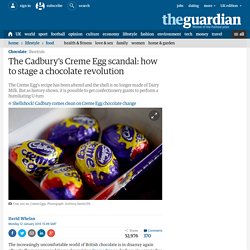 More shockingly yet, the chocolate eggshell will not be Dairy Milk any more, but a “standard cocoa mix chocolate” instead, because if you’re going to break some eggs you may as well blow up the whole chicken hatch. Customers promptly noticed that their Creme Eggs tasted funny, and then the Sun chased it up, which prompted the owner of the Cadbury brands, Mondelez International, to unleash a rather smug statement: The Creme Egg has never been called the Cadbury’s Dairy Milk Creme Egg.

We have never played on the fact Dairy Milk chocolate was used.” George Osborne rattled by tax experts’ accusations of colossal scale of cuts. George Osborne was drawn into a confrontation with Britain’s leading tax and spending experts after the Institute for Fiscal Studies said he had a duty to spell out his deficit reduction plans and warned of cuts on a “colossal” scale. 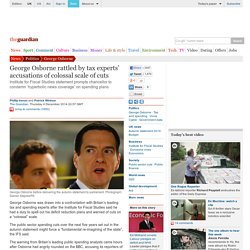 The public sector spending cuts over the next five years set out in the autumn statement might force a “fundamental re-imagining of the state”, the IFS said. The warning from Britain’s leading public spending analysts came hours after Osborne had angrily rounded on the BBC, accusing its reporters of “totally hyperbolic” reporting about his spending plans and conjuring up bogus images of the 1930s depression. But within hours of his rebuke, the IFS confirmed that the scale of cuts to departmental budgets and local government would reduce the role of the state to a point where it would have “changed beyond recognition”. The UK pornography law: a scientific perspective. Cassetteboy - Cameron's Conference Rap. Turning well people into patients. Seen your doctor recently? 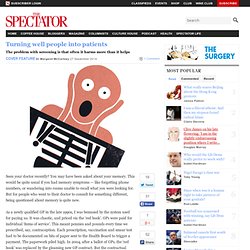 Tough case to crack: the mystery of Britain's falling crime rate. On the south side of Northampton, a town an hour's drive north of London, stands a former cinema that is now the home of a discount sofa warehouse called The Sofa King. 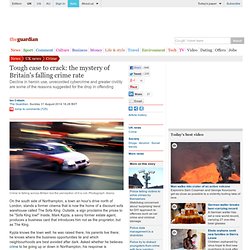 Outside, a sign proclaims the prices to be "Sofa King low! " 'Uninhabitable' Kensington basement with less than 30 years left on the lease goes on sale for nearly £600,000. But those tips were clearly ignored by the owner of this “uninhabitable” one-bed basement flat which has gone on the market for £595,000 despite having less than 30 years left on the lease and being affected by vibrations from passing tube trains. 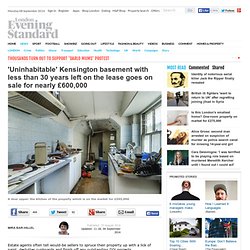 The sales brochure images show boxes and abandoned clothes piled up on the bare floor of the unpainted living room, the sink in the squalid kitchen is stacked with washing up and the single bed is covered only with a torn single sheet. The 904sq ft flat on a stuccoed Victorian terrace in Stanhope Gardens, South Kensington, is being sold through high-end estate agents Hamptons. In its sales brochure, it is described as a “completely unmodernised one bedroom basement flat, which... offers potential for significant improvement”. Policing report: Victims 'asked to investigate crime themselves' 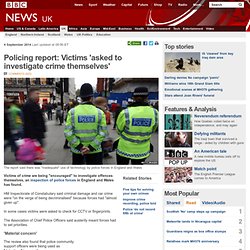 HM Inspectorate of Constabulary said criminal damage and car crime were "on the verge of being decriminalised" because forces had "almost given up". Private firms 'are using detained immigrants as cheap labour' The Yarl's Wood detention centre, Bedfordshire. 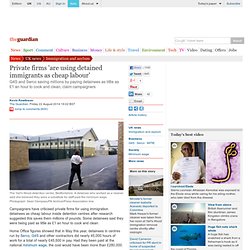 A detainee who worked as a cleaner said she believed they were a substitute for staff paid the minimum wage. Photograph: Sean Dempsey/PA Archive/Press Association Ima Campaigners have criticised private firms for using immigration detainees as cheap labour inside detention centres after research suggested this saves them millions of pounds. How will David Cameron's online music video classification system work? David Cameron announced on Monday that online music videos will carry age ratings as part of a pilot scheme bringing them into line with films. 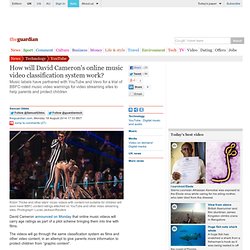 The videos will go through the same classification system as films and other video content, in an attempt to give parents more information to protect children from “graphic content”. The voluntary pilot will involve the big three music labels in the UK – Sony, Universal and Warner Music – as well as the British Board of Classification (BBFC), YouTube and music video platform Vevo.

How long will the pilot last? It will run for three months, kicking off in October. Music videos sold or distributed on disc or other physical form and deemed to include 12-rated-plus material will also have to go through the same age-classification process starting in October under amendments to the Video Recording Act. 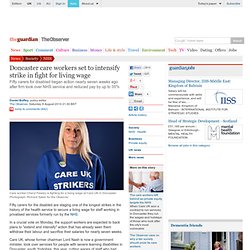 Photograph: Richard Saker for the Observer Fifty carers for the disabled are staging one of the longest strikes in the history of the health service to secure a living wage for staff working in privatised services formerly run by the NHS. In a crucial vote on Monday, the support workers are expected to back plans to "extend and intensify" action that has already seen them withdraw their labour and sacrifice their salaries for nearly seven weeks. Care UK, whose former chairman Lord Nash is now a government minister, took over services for people with severe learning disabilities in Doncaster, south Yorkshire, this year, cutting wages of staff who had been on NHS terms by up to 35% while bringing in 100 new workers on £7 an hour.

Proposed ban on overseas-only recruitment - People Management Magazine Online. 'Sobriety tags' for people who commit alcohol-linked crimes get London trial. Binge drinkers who commit minor crimes will be prevented from drinking for set periods using ankle tags that measure whether they are consuming alcohol, under a scheme to be trialled in London. The year-long test, covering four parts of south London, will be the first in which offenders are compulsorily fitted with the tags, which measure alcohol levels in perspiration and transmit the readings to a base station in the person's home. Merseyside's race hate crimes won't be stopped by body cameras. It is a question bedevilling every liberal democracy.

People must be free to think as they choose, but how to police hate? We have laws that proscribe behaviours injurious to society, yet they can do little to affect the root causes of racism and sexism and discriminatory thinking. That's a job for parents and teachers, the authorities with the heft and reach to alter public perceptions. Ethnic minorities face barriers to social mobility and job opportunities. Britain's ethnic minorities still face significant barriers to social mobility despite many having better qualifications than their white counterparts, according to researchers at the University of Manchester. Chinese, Indian, Irish, Bangladeshi and black African students are now outperforming their white British peers in obtaining five or more GSCEs at grade A* to C, but increased attainment over the past 20 years has failed to translate into improved job outcomes, say academics from the Centre on Dynamics of Ethnicity. About 43% of Chinese and 42% of Indian people had a degree-level qualification in 2011, compared with 26% of white British, while the most disadvantaged of the black and ethnic minority groups (BME) – Pakistani and Bangladeshi – had almost quadrupled their rates of degree-level qualifications since 1991.

Orbit Tower Will Go Gold If England Win The World Cup. 'If I move he'll attack': mastering rage in prisoners. Is failure to promote the wearing of cycle helmets irresponsible? Cardiff After Dark. Unreliable statistics of 2013. The fudge "Only crisis-hit Spain has higher numbers of young unemployed people than the UK. " Ed Miliband. Conservative party deletes archive of speeches from internet. Medical tourism generates millions for NHS and wider economy, finds study. Medical tourism is a lucrative source of income for the NHS, according to a major new study that contradicts many of the assumptions behind the government's announcement that it will clamp down on foreigners abusing the health service.

Eighteen hospitals – those deemed most likely to be making money from overseas patients – earned £42m in 2010, according to researchers from the London School of Hygiene and Tropical Medicine and York University. Medical tourists spent an estimated £219m on hotels, restaurants, shopping and transport in the UK. The researchers also found that more people leave the UK seeking medical treatment abroad than arrive in this country for care: about 63,000 people from the country travelled to hospitals and clinics abroad in 2010, while considerably fewer, about 52,000 people, came here. SamAmbreen: Have spent most of my life... No 10 denies David Cameron red box security breach. Downing Street has rejected suggestions that David Cameron might have caused a security breach by briefly leaving his official ministerial red box unaccompanied on the table of a train carriage. A train passenger took a photograph of the red box, which was published by the Daily Mirror. Bike blog: There's no ethical case for mandatory cycle helmets.

Mews at 10: Downing St&#039;s new cat. We're all upset about Baby 59. So what else do we agree on? Aside from football, sport in Britain is still a game for the elite. Olympic VIPs take fast lane leaving patients at risk. The real meaning of the Jubilee. Revealed: the full picture of sentences handed down to rioters. An Open Letter to David Cameron’s Parents « Nathaniel Tapley. If the rioting was a surprise, people weren't looking. When explaining becomes a sin. A social media crackdown is the wrong response to riots. Strong evidence. The Fleet – London’s Underground River. The Queen’s English Society deplores your impurities « Sentence first.