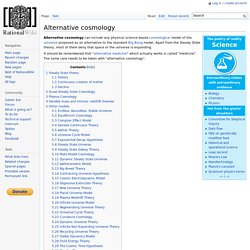 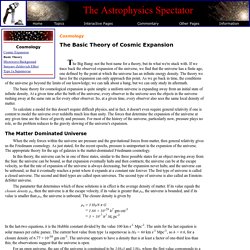 If we trace back the observed expansion of the universe, we find that the universe has a finite age, one defined by the point at which the universe has an infinite energy density. The theory we have for the expansion can only approach this point. As we go back in time, the conditions of the universe go beyond the limits of our knowledge; we can talk about a bang, but we can only study its aftermath. The basic theory for cosmological expansion is quite simple: a uniform universe is expanding away from an initial state of infinite density. Cosmic Inflation - The Big Bang and the Big Crunch - The Physics of the Universe. Lambda-CDM model. The ΛCDM (Lambda cold dark matter) or Lambda-CDM model is a parametrization of the Big Bang cosmological model in which the universe contains a cosmological constant, denoted by Lambda (Greek Λ), associated with dark energy, and cold dark matter (abbreviated CDM). 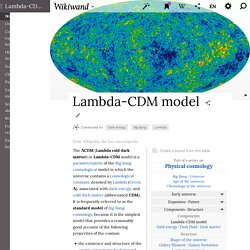 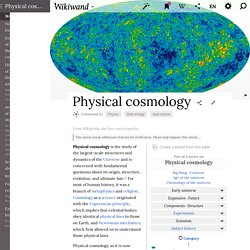 Please help improve this article by adding citations to reliable sources. Unsourced material may be challenged and removed. (February 2009) Big Bang. According to the Big Bang model, the universe expanded from an extremely dense and hot state and continues to expand. 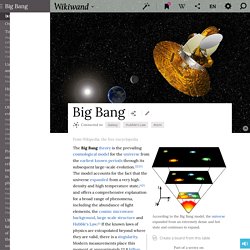 Since Georges Lemaître first noted, in 1927, that an expanding universe might be traced back in time to an originating single point, scientists have built on his idea of cosmic expansion. While the scientific community was once divided between supporters of two different expanding universe theories, the Big Bang and the Steady State theory, accumulated empirical evidence provides strong support for the former.[8] In 1929, from analysis of galactic redshifts, Edwin Hubble concluded that galaxies are drifting apart, important observational evidence consistent with the hypothesis of an expanding universe.

In 1965, the cosmic microwave background radiation was discovered, which was crucial evidence in favor of the Big Bang model, since that theory predicted the existence of background radiation throughout the universe before it was discovered. Overview Timeline Singularity. Nucleosynthesis. Nucleosynthesis is the process that creates new atomic nuclei from pre-existing nucleons, primarily protons and neutrons. 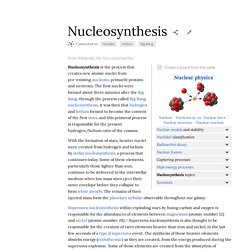 The first nuclei were formed about three minutes after the Big Bang, through the process called Big Bang nucleosynthesis. It was then that hydrogen and helium formed to become the content of the first stars, and this primeval process is responsible for the present hydrogen/helium ratio of the cosmos. With the formation of stars, heavier nuclei were created from hydrogen and helium by stellar nucleosynthesis, a process that continues today. The Big Bang. The Big Bang Watch a video or read the story of the history of the Universe. 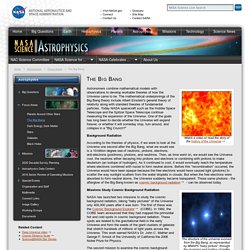 Astronomers combine mathematical models with observations to develop workable theories of how the Universe came to be. The mathematical underpinnings of the Big Bang theory include Albert Einstein's general theory of relativity along with standard theories of fundamental particles. Today NASA spacecraft such as the Hubble Space Telescope and the Spitzer Space Telescope continue measuring the expansion of the Universe. One of the goals has long been to decide whether the Universe will expand forever, or whether it will someday stop, turn around, and collapse in a "Big Crunch? " Big Bang Theory. What Came Before the Big Bang? It is cosmology’s most fundamental question: How did the universe begin? 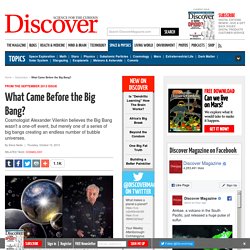 The question presupposes that the universe had an actual starting point, but one might just as well assume the universe always was and always will be. In that case, there would be no beginning whatsoever — just an ever-evolving story of which we’re catching a mere glimpse. “We have very good evidence that there was a Big Bang, so the universe as we know it almost certainly started some 14 billion years ago. But was that the absolute beginning, or was there something before it?” Asks Alexander Vilenkin, a cosmologist at Tufts University near Boston.

But now Vilenkin says he has convincing evidence in hand: The universe had a distinct beginning — though he can’t pinpoint the time. THE BIG BANG. Chris LaRocco and Blair Rothstein present: The Hubble Telescope's deepest view of the universe teaches us about the beginning We certainly know that our universe exists, however, this knowledge alone has not satisfied mankind's quest for further understanding. 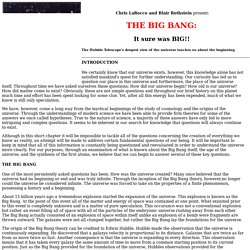 Our curiosity has led us to question our place in this universe and furthermore, the place of the universe itself. Throughout time we have asked ourselves these questions: How did our universe begin? How old is our universe? Origins of the Universe, Big Bang Theory Information, Big Bang Facts, News, Photos. The most popular theory of our universe's origin centers on a cosmic cataclysm unmatched in all of history—the big bang.

This theory was born of the observation that other galaxies are moving away from our own at great speed, in all directions, as if they had all been propelled by an ancient explosive force. Before the big bang, scientists believe, the entire vastness of the observable universe, including all of its matter and radiation, was compressed into a hot, dense mass just a few millimeters across. This nearly incomprehensible state is theorized to have existed for just a fraction of the first second of time. Big bang proponents suggest that some 10 billion to 20 billion years ago, a massive blast allowed all the universe's known matter and energy—even space and time themselves—to spring from some ancient and unknown type of energy. 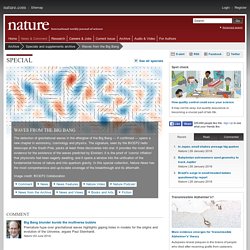 Big Bang finding challenged. Planck Collaboration (ESLAB2013) Cross-checks of gravitational-wave results used this galactic-dust map from the Planck satellite. The astronomers who earlier this year announced that they had evidence of primordial gravitational waves jumped the gun, two independent analyses suggest. The papers, published on the arXiv preprint repository, propose that the original analysis did not properly account for the confounding effects of galactic dust. Although further observations may yet confirm the findings, independent researchers now say they no longer think that the original data constituted significant evidence. “Based on what we know right now, we have no evidence for or against gravitational waves,” says Uroš Seljak, a cosmologist at the University of California, Berkeley, and co-author of one of the latest studies1. Gravitational waves discovery now officially dead.

ESA/Planck Collab. M. -A. Miville-Deschênes, CNRS, Univ. Paris-XI. Cosmology: The test of inflation. Chemical element. Chemical elements constitute all of the ordinary matter of the universe. However astronomical observations suggest that ordinary observable matter is only approximately 15% of the matter in the universe: the remainder is dark matter, the composition of which is unknown, but it is not composed of chemical elements.[3] The two lightest elements, hydrogen and helium were mostly formed in the Big Bang and are the most common elements in the universe.

The next three elements (lithium, beryllium and boron) were formed mostly by cosmic ray spallation, and are thus more rare than those that follow. Formation of elements with from six to twenty six protons occurred and continues to occur in main sequence stars via stellar nucleosynthesis. The high abundance of oxygen, silicon, and iron on Earth reflects their common production in such stars. When different elements are chemically combined, with the atoms held together by chemical bonds, they form chemical compounds. Description. Universe. The Universe is all of time and space and its contents.[9][10][11][12] The Universe includes planets, stars, galaxies, the contents of intergalactic space, the smallest subatomic particles, and all matter and energy. The observable universe is about 28 billion parsecs (91 billion light-years) in diameter at the present time.[3] The size of the whole Universe is not known and may be either finite or infinite.[13] Observations and the development of physical theories have led to inferences about the composition and evolution of the Universe.

There are many competing hypotheses about the ultimate fate of the Universe. Physicists and philosophers remain unsure about what, if anything, preceded the Big Bang. Many refuse to speculate, doubting that any information from any such prior state could ever be accessible. There are various multiverse hypotheses, in which some physicists have suggested that the Universe might be one among many universes that likewise exist.[18][19] Definition. Centre for Theoretical Cosmology: The Origins of the Universe: The beginning of the Universe. The Origin of the Universe. The Origin of the Universe This lecture is the intellectual property of Professor S.W.Hawking. You may not reproduce, edit, translate, distribute, publish or host this document in any way with out the permission of Professor Hawking.Note that there may be incorrect spellings, punctuation and/or grammar in this document.

This is to allow correct pronunciation and timing by a speech synthesiser. Can you hear me? Dark matter. Dark matter is invisible. Based on the effect of gravitational lensing, a ring of dark matter has been inferred in this image of a galaxy cluster (CL0024+17) and has been represented in blue.[1] Dark Energy, Dark Matter. Dark Energy: The Biggest Mystery in the Universe. Twice a day, seven days a week, from February to November for the past four years, two researchers have layered themselves with thermal underwear and outerwear, with fleece, flannel, double gloves, double socks, padded overalls and puffy red parkas, mummifying themselves until they look like twin Michelin Men. Then they step outside, trading the warmth and modern conveniences of a science station (foosball, fitness center, 24-hour cafeteria) for a minus-100-degree Fahrenheit featureless landscape, flatter than Kansas and one of the coldest places on the planet.

Alternatives to the Big Bang Theory Explained (Infographic) Nearly 14 billion years ago, there was nothing and nowhere. Then, due to a random fluctuation in a completely empty void, a universe exploded into existence. Something the size of a subatomic particle inflated to unimaginably huge size in a fraction of a second, driven apart by negative-pressure vacuum energy. Non-standard cosmology. History Modern physical cosmology as it is currently studied first emerged as a scientific discipline in the period after the Shapley–Curtis debate and discoveries by Edwin Hubble of a cosmic distance ladder when astronomers and physicists had to come to terms with a universe that was of a much larger scale than the previously assumed galactic size.

Theorists who successfully developed cosmologies applicable to the larger-scale universe are remembered today as the founders of modern cosmology. Among these scientists are Arthur Milne, Willem de Sitter, Alexander Friedman, Georges Lemaitre, and Albert Einstein himself.