This Is How You Build Products for the New Generation of 'Data Natives' Imagine a major intersection where all the innovation taking place in data analytics and all the advances in hardware meet. 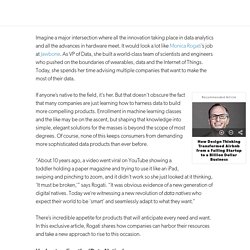 It would look a lot like Monica Rogati’s job at Jawbone. As VP of Data, she built a world-class team of scientists and engineers who pushed on the boundaries of wearables, data and the Internet of Things. Today, she spends her time advising multiple companies that want to make the most of their data. If anyone’s native to the field, it’s her.

But that doesn’t obscure the fact that many companies are just learning how to harness data to build more compelling products. “About 10 years ago, a video went viral on YouTube showing a toddler holding a paper magazine and trying to use it like an iPad, swiping and pinching to zoom, and it didn’t work so she just looked at it thinking, ‘It must be broken,’” says Rogati. There’s incredible appetite for products that will anticipate every need and want. Understanding the ‘Data Native’ How This Startup Solves Our Too-Much-Data Problem. Smart thermostats like Google's Nest report the temperature and can be controlled online. 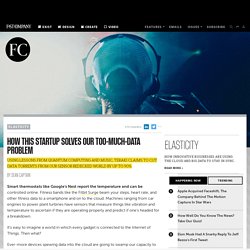 Fitness bands like the Fitbit Surge beam your steps, heart rate, and other fitness data to a smartphone and on to the cloud. Machines ranging from car engines to power plant turbines have sensors that measure things like vibration and temperature to ascertain if they are operating properly and predict if one's headed for a breakdown. It's easy to imagine a world in which every gadget is connected to the Internet of Things. Then what? Ever-more devices spewing data into the cloud are going to swamp our capacity to collect and analyze the information, says Edouard Rozan, cofounder of Berlin-based startup Teraki.

Not all connected devices are hooked up to fast networks, either. They could include sound sensors in cities, which are used to monitor traffic. Rozan says Teraki can address this problem by reducing data flow from sensors up to 90%. Teraki uses one called frequency decomposition. Dr. Randal S. Olson. Arabesque Distributed Graph Mining Platform. Arabesque provides an elegant solution to the difficult problem of graph mining that lets a user easily express graph algorithms and efficiently distribute the computation. 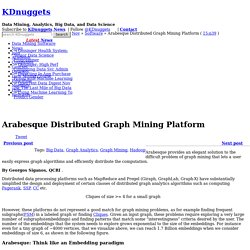 By Georgos Siganos, QCRI . Cliques of size >= 4 for a small graph Arabesque: Think like an Embedding paradigm Our system Arabesque is the first distributed data processing platform focused on solving these graph mining problems. Arabesque automates the process of exploring a very large number of embeddings, and defines a high-level computational model (filter – process) that simplifies the development of scalable graph mining algorithms. Example Discover Cliques As an example, consider the code for computing cliques that we discuss in more detail in our website. @Override public boolean filter(VertexInducedEmbedding embedding) { return isClique(embedding); } /** ** For efficiency the following isClique implementation works ** in an incremental way.

Elegant but above all Efficient Open Source: Apache 2.0 license. Related: How Graph-Based Smart Data Lakes Will Democratize Value Extraction from Big Data. The prevalence of big data and the value it generates has greatly, and perhaps indelibly, altered contemporary business practices in two pivotal ways. 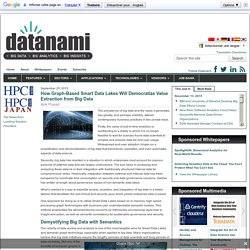 Firstly, the value of just-in-time analytics is contributing to a reality in which it is no longer feasible to wait for scarcely found data scientists to compile and prepare data for end-user usage. Widespread end-user adoption hinges on a simplification and democratization of big data that transcends, expedites, and even automates aspects of data science. Secondly, big data has resulted in a situation in which enterprises must account for copious amounts of external data that are largely unstructured.

The true value in accessing and analyzing these data lie in their integration with traditionally structured internal data for comprehensive views. Historically, integration between external and internal data has been hampered by inordinate time consumption on security and data governance concerns. Search for a Dataset. Index 1,600,000,000 Keys with Automata and Rust - Andrew Gallant's Blog. It turns out that finite state machines are useful for things other than expressing computation. 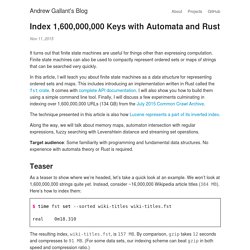 Finite state machines can also be used to compactly represent ordered sets or maps of strings that can be searched very quickly. In this article, I will teach you about finite state machines as a data structure for representing ordered sets and maps. This includes introducing an implementation written in Rust called the fst crate. It comes with complete API documentation. I will also show you how to build them using a simple command line tool. The technique presented in this article is also how Lucene represents a part of its inverted index. Along the way, we will talk about memory maps, automaton intersection with regular expressions, fuzzy searching with Levenshtein distance and streaming set operations.

Target audience: Some familiarity with programming and fundamental data structures. Teaser As a teaser to show where we’re headed, let’s take a quick look at an example. Table of Contents.