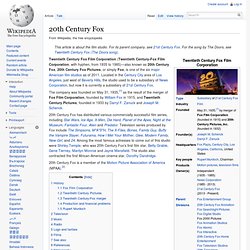 Located in the Century City area of Los Angeles, just west of Beverly Hills, the studio used to be a subsidiary of News Corporation, but now it is currently a subsidiary of 21st Century Fox. 20th Century Fox is a member of the Motion Picture Association of America (MPAA).[2] History[edit] Fox Film Corporation[edit] Always more of an entrepreneur than a showman, Fox[3] concentrated on acquiring and building theaters; pictures were secondary. With the introduction of sound technology, Fox moved to acquire the rights to a sound-on-film process. When rival Marcus Loew died in 1927, Fox offered to buy the Loew family's holdings. Overextended and close to bankruptcy, Fox was stripped of his empire in 1930 and ended up in jail. 20th Century Fox. Metro-Goldwyn-Mayer. 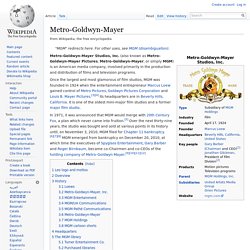 (also known as Metro-Goldwyn-Mayer Pictures, Metro-Goldwyn-Mayer, or simply MGM) is an American media company, involved primarily in the production and distribution of films and television programs. Once the largest and most glamorous of film studios, MGM was founded in 1924 when the entertainment entrepreneur Marcus Loew gained control of Metro Pictures, Goldwyn Pictures Corporation and Louis B. Mayer Pictures.[3][4] Its headquarters are in Beverly Hills, California. It is one of the oldest mini-major film studios and a former major film studio. §Leo logo and mottos[edit] §Overview[edit] The debt load from these and subsequent business deals negatively affected MGM's ability to survive as an independent motion picture studio.

MGM Resorts International, a Las Vegas-based hotel and casino company listed on the New York Stock Exchange under the symbol "MGM",[43] is not currently affiliated with Metro-Goldwyn-Mayer. Metro-Goldwyn-Mayer. RKO Pictures. RKO Pictures. Paramount Pictures. In 2014, Paramount Pictures became the first major Hollywood studio to distribute all of its films in digital-form only.[3] §History[edit] §1911–1920: Early history[edit] Paramount is the fifth oldest surviving film studio in the world after Gaumont Film Company (1895), Pathé (1896), Nordisk Film, (1906), and Universal Studios.[4] It is the last major film studio still headquartered in the Hollywood district of Los Angeles. 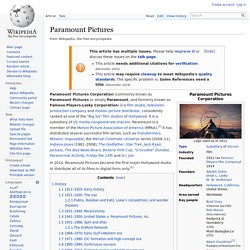 Paramount Pictures dates its existence from the 1912 founding date of the Famous Players Film Company. Founder Hungarian-born Adolph Zukor, who had been an early investor in nickelodeons, saw that movies appealed mainly to working-class immigrants.[5] With partners Daniel Frohman and Charles Frohman he planned to offer feature-length films that would appeal to the middle class by featuring the leading theatrical players of the time (leading to the slogan "Famous Players in Famous Plays") 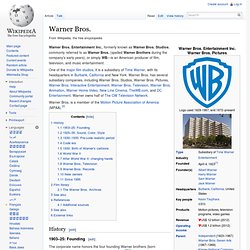 Entertainment Inc., formerly known as Warner Bros. Studios, commonly referred to as Warner Bros. (spelled Warner Brothers during the company's early years), or simply WB—is an American producer of film, television, and music entertainment. One of the major film studios, it is a subsidiary of Time Warner, with its headquarters in Burbank, California and New York. Warner Bros. has several subsidiary companies, including Warner Bros.