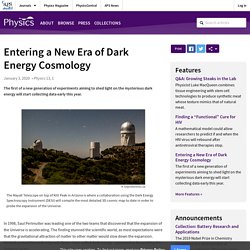 The most established method is the one famously used by Perlmutter and others in the 1990s. It relies on type Ia supernovae, thermonuclear explosions of white dwarfs that are visible even in galaxies ten billion light years away. Since the intrinsic brightness of this type of supernova is known, these events serve as “standard candles”: the brightness observed on Earth can be used to calculate their distances. Astronomers can also determine the speed with which a supernova is moving away from us by measuring its redshift, the change in wavelength of spectral features caused by the Doppler effect. The redshift provides the cosmic time at which we are seeing the explosion, since objects that are receding faster are farther away in both space and time than ones receding more slowly.

DESI will use a different method, based on measuring the large-scale distribution of galaxies. Z. DESI Collaboration. What are the chances that a particle collider's strangelets will destroy the Earth? (Phys.org) —At the Relativistic Heavy Ion Collider (RHIC) at Brookhaven National Laboratory (BNL) in Long Island, New York, scientists study high-speed ion collisions that reveal what the universe may have looked like moments after the Big Bang. 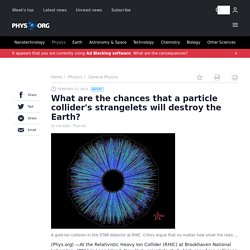 RHIC is the second-highest-energy heavy-ion collider in the world, after the Large Hadron Collider (LHC), and currently the only operating particle collider in the US. Even before RHIC began operating in 2000, some people worried that the unprecedented experiment would pose risks of potentially catastrophic scenarios. Some of the concerns included the creation of a black hole or production of strange matter that could result in the destruction of the Earth, possibly within seconds. In 1999, before the collider opened, the media attention on the subject prompted BNL to form a committee of scientists to investigate the probability of such catastrophic scenarios. A few months later, the committee concluded that RHIC was safe. According to Eric E. What are quarks? Nuclear physics and science - Quatr.us Study Guides. What are quarks? 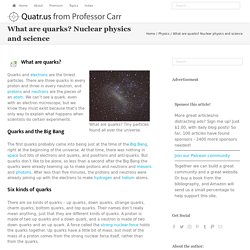 Tiny particles found all over the universe. What are quarks? Explainer: what is antimatter? Antimatter was one of the most exciting physics discoveries of the 20th century. 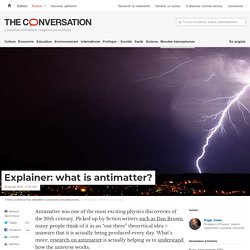 Picked up by fiction writers such as Dan Brown, many people think of it as an “out there” theoretical idea – unaware that it is actually being produced every day. What’s more, research on antimatter is actually helping us to understand how the universe works. Antimatter is a material composed of so-called antiparticles. It is believed that every particle we know of has an antimatter companion that is virtually identical to itself, but with the opposite charge.

For example, an electron has a negative charge. Such particles were first predicted by British physicist Paul Dirac when he was trying to combine the two great ideas of early modern physics: relativity and quantum mechanics. Despite initial scepticism, examples of these particle-antiparticle pairs were soon found. What is antimatter? R. 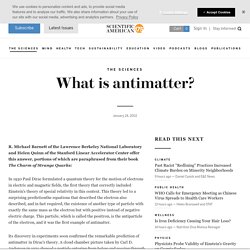 Michael Barnett of the Lawrence Berkeley National Laboratory and Helen Quinn of the Stanford Linear Accelerator Center offer this answer, portions of which are paraphrased from their book The Charm of Strange Quarks: In 1930 Paul Dirac formulated a quantum theory for the motion of electrons in electric and magnetic fields, the first theory that correctly included Einstein's theory of special relativity in this context. What You Need To Know About CERN And The ANTIMATTER MOVEMENT. What You Need To Know About The CERN EXPERIMENT And The MACHINE.

What You Need To Know About The CERN EXPERIMENT And The MACHINE. Plasma Wakefield Acceleration. Particle accelerators so far have relied on electric fields generated by radio waves to accelerate electrons and other particles close to the speed of light. 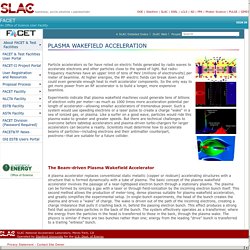 But radio-frequency machines have an upper limit of tens of MeV (millions of electronvolts) per meter of beamline. At higher energies, the RF electric fields can break down and could even generate enough heat to melt accelerator components. So the only way to get more power from an RF accelerator is to build a longer, more expensive beamline. Experiments indicate that plasma wakefield machines could generate tens of billions of electron volts per meter—as much as 1000 times more acceleration potential per length of accelerator—allowing smaller accelerators of tremendous power.

Such a system would use speeding electrons or a laser pulse to create a charge "wake" in a sea of ionized gas, or plasma. ProgressReport vol 33. Mandela Effect - Happy At Cern - math-magicians, magic circles and the mastery of time. CERN admits thier real Mission THE STAIRWAY TO HEAVEN. CERN discovers 5 new STATES. Heavy ions and quark-gluon plasma.

For a few millionths of a second, shortly after the Big Bang, the universe was filled with an astonishingly hot, dense soup made of all kinds of particles moving at near light speed. 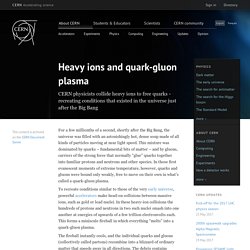 This mixture was dominated by quarks – fundamental bits of matter – and by gluons, carriers of the strong force that normally “glue” quarks together into familiar protons and neutrons and other species. In those first evanescent moments of extreme temperature, however, quarks and gluons were bound only weakly, free to move on their own in what’s called a quark-gluon plasma. To recreate conditions similar to those of the very early universe, powerful accelerators make head-on collisions between massive ions, such as gold or lead nuclei. Get out the periodic table, kids! There's a new element: 117. What once looked no closer to reality than the fictitious chemical element "unobtainium" has now taken its place on the periodic table of chemical elements. 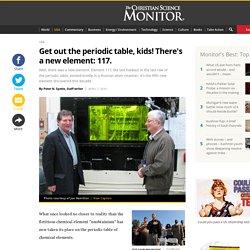 Let’s hear it for element 117, the last holdout in the last row of the periodic table. An international team of physicists reports that it has produced the element – fleetingly – in an atom smasher in Russia. The discovery brings to 26 the number of so-called transuranic elements scientists have uncovered – elements that extend the periodic table beyond uranium. Element 117, which has yet to receive a formal name, is the fifth new element scientists have discovered in the past decade. Taken together, "these elements expand our understanding of the universe and provide important tests of nuclear theories," said Vanderbilt University physicist Joe Hamilton, in a statement.

CERN alleges They have SUPERCHARGED the LHC. CERN and Questioning Reality. About Synchrotrons - Diamond Light Source. The history of synchrotrons can be traced back to 1873, when James Clerk Maxwell published his theory of electromagnetism; this theory changed our understanding of light. 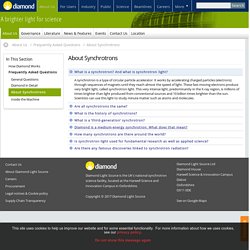 Some years later in 1895, Wilhelm Rontgen expanded on Maxwell’s theory and identified X-ray light, and by 1906 Charles Barkla had discovered that X-rays could be used as a tool to determine the elements present in gases. In 1912 Max von Laue found another use for X-rays: the beams could help to identify the structure of very small matter, like atoms, based on their crystal structure. In 1913, William Henry and Lawrence Bragg, a father and son team, solved the formula for determining an object’s structure based on the pattern formed by X-rays passing through it. Particle accelerator - Wikipedia. Sketch of the Ising/Widerøe linear accelerator concept, employing oscillating fields (1928) There are two basic classes of accelerators: electrostatic and electrodynamic (or electromagnetic) accelerators. [3] Electrostatic accelerators use static electric fields to accelerate particles. 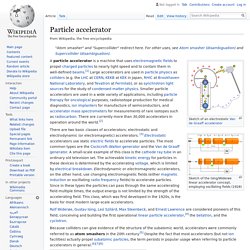 The most common types are the Cockcroft–Walton generator and the Van de Graaff generator. A small-scale example of this class is the cathode ray tube in an ordinary old television set. The achievable kinetic energy for particles in these devices is determined by the accelerating voltage, which is limited by electrical breakdown. Large Hadron Collider could be world’s first time machine. By David Salisbury | Mar. 15, 2011, 9:17 AM | Want more research news? Subscribe to our weekly newsletter » Prof. Thomas Weiler, right, and graduate fellow Chui Man Ho (John Russell / Vanderbilt) If the latest theory of Tom Weiler and Chui Man Ho is right, the Large Hadron Collider – the world’s largest atom smasher that started regular operation last year – could be the first machine capable of causing matter to travel backwards in time. “Our theory is a long shot,” admitted Weiler, who is a physics professor at Vanderbilt University, “but it doesn’t violate any laws of physics or experimental constraints.”

CERN-Even More Dangerous Than Ever! Did They Find the Prison of Fallen Angels? The boys at CERN have got some explaining to do. pt.1 OccultScience101. Strange-let updates. From time to time we will bring in this post the relevant new records and new forms of quark strange liquids produced by the Industry of Accelerators, which sooner or latter will become stable and start up an ice-9 reaction that will ‘freeze’ into a 15 km. rock mother Earth… And some other strange news about the obsession with genocide of nuclear physicists and its faked, ‘great research’ flukes on the meaning of it all. Update. August 2016. A dissenter at CERN recorded a mock sacrifice of a wo=man, to Kali, Goddess of death. CONCERN ABOUT CERN: THE STRANGELETS RUMOR REMERGES. Remember when CERN's Large Hadron Collider was scheduled to be turned on for the first time? THere were efforts in the courts, both in this country, and in Europe, to block the process, with the plaintiffs seeking injunctions to prevent it, until the possibility that the collider might create "strangelets", or "quark-gluon condensates" or plasmas, that might gobble up the planet.