Top 10 Bigfoot Sightings of the Last 5 Years. Bigfoot believer claims DNA proves beast’s existence. A Calgary man who has spent a decade tracing the movements of an elusive ape-like beast — widely considered a myth — believes he has DNA evidence suggesting bigfoot is alive and romping through Canadian forests. 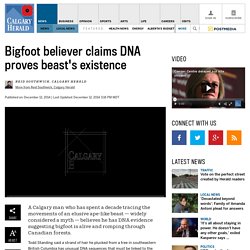 Todd Standing said a strand of hair he plucked from a tree in southeastern British Columbia has unusual DNA sequences that must be linked to the legendary sasquatch. The hair sample was tested by a lab in Thunder Bay, Ont., which concluded it was human, but Standing rejects the conclusion and interprets the results differently. He believes his long-standing hunt to prove bigfoot’s existence is gaining tremendous momentum. And he’s looking for geneticists to verify his findings. “This is a perfect sample, uncontaminated,” he said. For years, Standing has made it his mission to convince the masses that bigfoot is not a myth, but an undocumented species of primate that walks on two legs.

“I can’t say I’ve trained them … I’ve habituated them to take food gifts from me.” Bigfoot believer claims DNA proves beast’s existence. Meet Toronto's official Bigfoot researcher. One decade ago, Christopher Lau was eating dinner when his father asked the 22-year-old to help him track down Sasquatch. 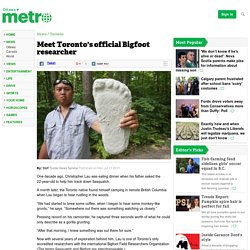 A month later, the Toronto native found himself camping in remote British Columbia when Lau began to hear rustling in the woods. “We had started to brew some coffee, when I began to hear some monkey-like grunts,” he says. “Somewhere out there was something watching us closely.” Pressing record on his camcorder, he captured three seconds worth of what he could only describe as a gorilla grunting.

“After that morning, I knew something was out there for sure.” Now with several years of exploration behind him, Lau is one of Toronto’s only accredited researchers with the international Bigfoot Field Researchers Organization. Sasquatch hunter MK Davis claims to have video footage of the mysterious creature. Bigfoot hunter MK Davis spotted the dark figure in video footage from 2008He had filmed the video while walking with friends in Bluff Creek, CaliforniaHe only noticed the shadowy figure when reviewing the footage recentlyHe claims the Bigfoot appears to be struggling with a bag of some kind By Richard Gray for MailOnline Published: 12:52 GMT, 24 August 2015 | Updated: 17:07 GMT, 24 August 2015. 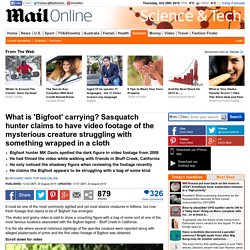 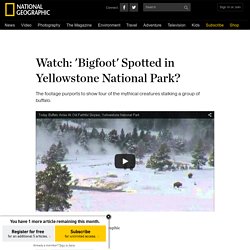 Uploaded by Youtube user Mary Greeley, and then pounced upon by Bigfoot hunters, the fuzzy clip appears to show not one, but four, Bigfeet ambling through the woods. Bigfoot may be pure myth, but he's long held sway over popular culture—and has even sparked some scientists' curiosity. In 2014, a research group led by Oxford University geneticist Bryan Sykes conducted genetic testing on several hair samples that people claimed were from the elusive creature—the first scientific study of its kind. Their DNA tests revealed that the supposed Bigfoot hair actually belonged to bears and other known mammals. Bigfoot hunt: Meet the man who hopes to find Sasquatch in southern Ontario. A Toronto-area Bigfoot researcher is tracking reports that the creature may be hiding in the Muskoka region of Ontario. 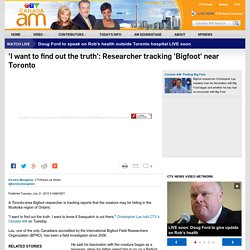 "I want to find out the truth. I want to know if Sasquatch is out there," Christopher Lau told CTV's Canada AM on Tuesday. Lau, one of the only Canadians accredited by the international Bigfoot Field Researchers Organization (BFRO), has been a field investigator since 2006. He said his fascination with the creature began as a teenager, when his father asked him to go on a Bigfoot hunting expedition in B.C. "We went out there, and that's when I had an encounter," Lau said. Lau describes walking through a wooded area north of Vancouver, during the early morning hours, when a creature approached him.

He said he was able to capture three seconds of the encounter on camera, but because of the speed of the approach and retreat, he didn’t record any images of it on video. "Ever since then, I've been fascinated and curious. " Yeti - Yeti, the Abominable Snowman. Yeti The Tibetan name for the Abominable Snowman, a humanlike monster whose tracks have been discovered in the frigid lands of perpetual snow in the Himalayan regions of India, Nepal, and Tibet. 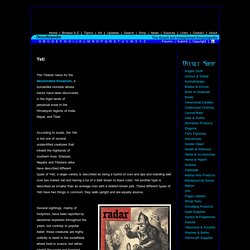 According to locals, the Yeti is but one of several unidentified creatures that inhabit the highlands of southern Asia. Sherpas, Nepalis and Tibetans alike have described different types of Yeti; a larger variety is described as being a hybrid of man and ape and standing well over two meters tall and having a fur of a dark brown to black color. Yet another type is described as smaller than an average man with a reddish-brown pelt. These different types of Yeti have two things in common; they walk upright and are equally elusive. In every mountain range in the world live people who tell stories of a strange, lumbering, manlike creature; of footprints too large to belong to any human; of isolated communities living in fear of a monster that goes by many names. Scientists challenge 'Abominable Snowman DNA' results. A theory that the mythical yeti is a rare polar bear-brown bear hybrid animal has been challenged. 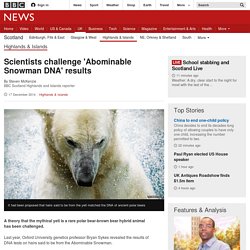 Last year, Oxford University genetics professor Bryan Sykes revealed the results of DNA tests on hairs said to be from the Abominable Snowman. The tests matched the samples with the DNA of an ancient polar bear. But two other scientists have said re-analysis of the same data shows the hairs belong to the Himalayan bear, a sub-species of the brown bear. The results of the new research by Ceiridwen Edwards and Ross Barnett have been published in the Royal Society journal, Proceedings of the Royal Society B. Among Dr Edwards' previous work was an attempt to carry out DNA analysis of a sample taken from bones of a polar bear washed into caves in north west Scotland 18,000 years ago. According to legend, the yeti is a large and elusive ape-like beast. Mystery of the yeti deepens as DNA analysis refutes 'bear' theory. Latest research dismisses theories that yeti is an unknown species of bearScientists had claimed DNA from 'yeti' hair found in the Himalaya matched the genetic sequence from a fossil polar bear that died 40,000 years agoThey claimed that the hair may belong to an undiscovered species of bearThe new research concludes the hair may belong to a common brown bearBut scientists are baffled how hunters confused the fur with hair of a yeti By Richard Gray for MailOnline Published: 16:37 GMT, 16 March 2015 | Updated: 15:40 GMT, 17 March 2015 They have eluded explorers, hunters and scientists who have been searching the Himalayan mountains for the mysterious yeti for over a century. 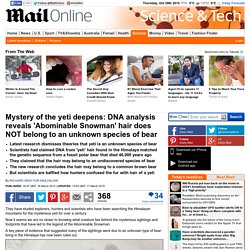 The Yeti. 'Yeti lives': Abominable Snowman is 'part polar bear and still roams the Himalayas' Professor Sykes conducted DNA tests on hairs from two unidentified animals, one found in the western Himalayan region of Ladakh, in northern India, and the other from Bhutan, 800 miles east. 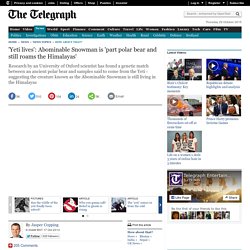 The results were then compared with other animals’ genomes stored on a database of all published DNA sequences. Professor Sykes found a 100 per cent match with a sample from an ancient polar bear jawbone found in Svalbard, Norway. That specimen dates back at least 40,000 years ago, and probably as far back as 120,000 years – a time when the polar bear and the closely related brown bear were separating as different species. 'Yeti lives': Abominable Snowman is 'part polar bear and still roams the Himalayas' The Yeti: Asia's Abominable Snowman. Mount Everest in the Himalayas. 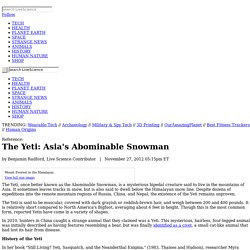 The Yeti, once better known as the Abominable Snowman, is a mysterious bipedal creature said to live in the mountains of Asia. It sometimes leaves tracks in snow, but is also said to dwell below the Himalayan snow line. Despite dozens of expeditions into the remote mountain regions of Russia, China, and Nepal, the existence of the Yeti remains unproven. The Yeti is said to be muscular, covered with dark grayish or reddish-brown hair, and weigh between 200 and 400 pounds.