Phantom of the Forest: Could the Cougar Again Haunt Eastern U.S. Woodlands? The phantom, it’s been called, this big cat that now prowls western North and South America forests from the Yukon to Patagonia. 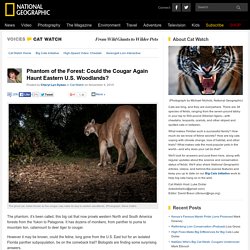 It has dozens of monikers, from panther to puma to mountain lion, catamount to deer tiger to cougar. However it may be known, could the feline, long gone from the U.S. East but for an isolated Florida panther subpopulation, be on the comeback trail? Biologists are finding some surprising answers. A clue may lie in its name. Out of balance: Cougars, deer–and humans Intertwined, but not in balance. A century ago, the white-tailed deer that currently overrun eastern woodlands almost went extinct. Then conservation programs and controlled hunting were introduced. It wasn’t only deer that were once in rifle sights. Eastern cougars once roamed as far north as southeastern Ontario, southern Quebec and New Brunswick in Canada; south to South Carolina; and west to Kentucky, Illinois and Michigan, according to the New Hampshire Wildlife Journal.

Gone walkabout. The Science Of Why You Are So Upset About Cecil The Lion. The brutal killing of Cecil the lion in Zimbabwe by an American dentist has been met with a torrent of anger worldwide. 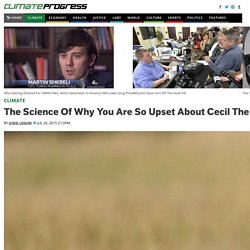 Many celebrities, including Judd Apatow, Mayim Bialik, Olivia Wilde, and Ricky Gervais, have weighed in to express their disgust. The deceased lion was trending on Twitter. In a now-viral video of Tuesday’s episode of Jimmy Kimmel Live, late-night host Jimmy Kimmel was so upset he nearly broke down in tears. Intuitively, the uproar over the lion’s murder makes sense. Chinese government creating secret demand for tiger trade alleges NGO (warning: graphic images) Man Jumps From Train At Bronx Zoo, Mauled By Tiger. Revealing the Leopard ~ Leopards are Best at Going the Distance. Leopards are survivors. Despite a changing world, the leopard has been able to maintain a surprisingly large population, especially in comparison to other big cats. While nobody knows the exact number of leopards currently on the planet, it’s estimated that there are roughly half a million — ten times more than lions, tigers, and cheetahs combined.

The majority are found in the grasslands of sub-Saharan Africa, most likely where the modern-day leopard originated hundreds of thousands of years ago — but they are also widespread, covering much of Africa, the Middle East, as well as eastern and southern Asia. They have settled in terrains that range from tropical rainforests and deserts, to alpine mountains and the outskirts of cities. Cougars Are Making a Comeback in America. A new study confirms what scientists have suspected: The country is seeing a resurgence of cougars (no, not Demi Moore and Courteney Cox, but the actual wild cat kind) throughout parts of the Midwest. 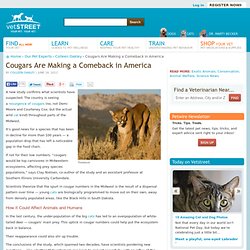 It's good news for a species that has been in decline for more than 100 years — a population drop that has left a noticeable gap in the food chain. If not for their low numbers, “cougars would be top carnivores in Midwestern ecosystems, affecting prey species populations,” says Clay Nielsen, co-author of the study and an assistant professor at Southern Illinois University Carbondale. Animals: Tigers Threatened by Climate Change : Video. Jaguar conservation gets a boost in North and Central America. First camera trap photo of a jaguar taken by Panthera in a deforested area of Costa Rica’s Barbilla-Destierro SubCorridor. 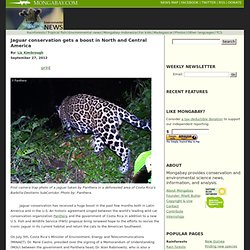 Photo by: Panthera. Jaguar conservation has received a huge boost in the past few months both in Latin America and in the U.S. An historic agreement singed between the world's leading wild cat conservation organization Panthera and the government of Costa Rica in addition to a new U.S. Fish and Wildlife Service (FWS) proposal bring renewed hope to the efforts to revive the iconic jaguar in its current habitat and return the cats to the American Southwest. On July 5th, Costa Rica’s Minister of Environment, Energy and Telecommunications (MINAET), Dr. Snow Leopard Facts. Asiatic cheetahs: on the road to extinction? New road projects imperils Critically Endangered cheetah subspecies Mother Asiatic cheetah with three cubs, an extreme rarity. 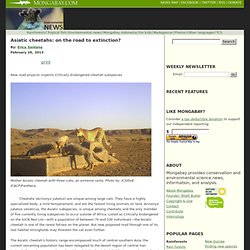 Clouded leopards declared extinct in Taiwan. MrGuilt/CC BY 2.0 After a century of rapid expansion throughout much of the wild parts of our world, we are beginning to better understand all of what was lost in the process. 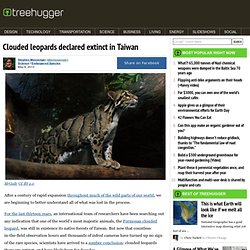 For the last thirteen years, an international team of researchers have been searching out any indication that one of the world's most majestic animals, the Formosan clouded leopard, was still in existence its native forests of Taiwan. But now that countless in-the-field observation hours and thousands of infred cameras have turned up no sign of the rare species, scientists have arrived to a somber conclusion: clouded leopards there are extinct, and have likely been for decades. “There is little chance that the clouded leopard still exists in Taiwan,” says zoologist Chiang Po-jen in an interview with the Taipei Times.

MrGuilt/CC BY 2.0 Formosan clouded leopards, a subspecies of those found on mainland Asia, were once highly sought-after by poachers for their valuable skins. Journey to the Edge of Eden: the struggle to preserve Southwest Florida. Gary Schmelz, in a Journey to the Edge of Eden, takes us through a wonderful personal account of the conservation history of Southwest Florida. 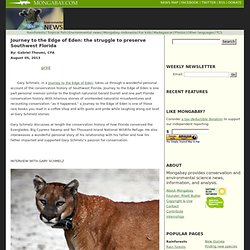 Journey to the Edge of Eden is one part personal memoir similar to the English naturalist Gerald Durrell and one part Florida conservation history. With hilarious stories of unintended naturalist misadventures and recounting conservation “as it happened,” a Journey to the Edge of Eden is one of those rare books you read in a coffee shop and with gusto and pride while laughing along out loud at Gary Schmelz stories. Gary Schmelz discusses at length the conservation history of how Florida conserved the Everglades, Big Cypress Swamp and Ten Thousand Island National Wildlife Refuge.

He also interweaves a wonderful personal story of his relationship with his father and how his father impacted and supported Gary Schmelz’s passion for conservation. Florida panther (Puma concolor coryi) with radio collar crossing road in Big Cypress area. Worm reefs. An avalanche of decline: snow leopard populations are plummeting. Snow leopard in the Toronto Zoo. 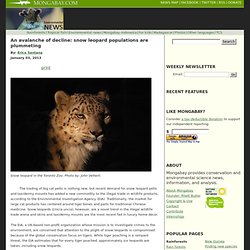 Photo by: John Vetterli. The trading of big cat pelts is nothing new, but recent demand for snow leopard pelts and taxidermy mounts has added a new commodity to the illegal trade in wildlife products, according to the Environmental Investigation Agency (EIA). Traditionally, the market for large cat products has centered around tiger bones and parts for traditional Chinese medicine. New Species of Cat Discovered in South America. A new species of cat was discovered in southern Brazil. 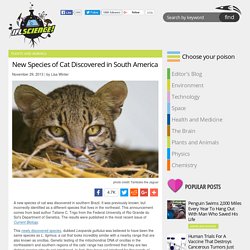 It was previously known, but incorrectly identified as a different species that lives in the northeast. This announcement comes from lead author Tatiane C. Jaguars in Argentine Chaco on verge of local extinction.