Big Data Tools. CityFALCON: Real time financial news and tweets for your watchlist. TERMS OF WEBSITE USE Please read these terms of use carefully before you start to use or or or or any other website, app or service owned or operated by City Falcon Limited (all hereinafter referred to as "site"). 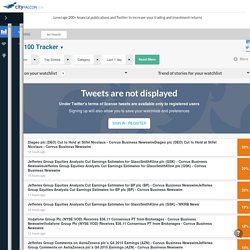 By using our site, you indicate that you accept these terms of use and that you agree to abide by them. If you do not agree to these terms of use, please refrain from using our Site. Please note that these terms do not apply for paid subscription, information and marketing services for which separate terms and conditions will apply. RELIANCE ON INFORMATION POSTED & DISCLAIMER The materials contained on our site are provided for general information purposes only and do not claim to be or constitute legal or other professional advice and shall not be relied upon as such.

INFORMATION ABOUT US Our site is operated by City Falcon Limited ("We"); we are a company registered in England and Wales under registration number 09107763. World Development Indicators. The primary World Bank collection of development indicators, compiled from officially-recognized international sources. 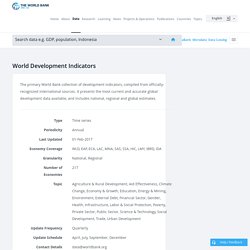 Influencers Are Lying, Statistics Are Only Telling Half The Truth. Last week Kim Garst posted an article about various ideas for posts for your Facebook page. 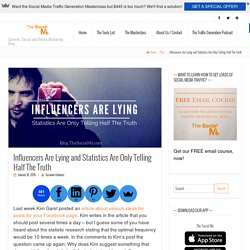 Kim writes in the article that you should post several times a day – but I guess some of you have heard about the statistic research stating that the optimal frequency would be 10 times a week. In the comments to Kim’s post the question came up again: Why does Kim suggest something that does not follow the statistics? And what should you do? There is a similar discussion for Twitter: Social Bakers state that three Tweets a day would be optimal, Track Social found a number of five Tweets to be the optimum. Yet, influencers like Jeff Bullas follow the advice by Simply Measured that tweeting every 15 minutes instead of every 30 minutes can increase by 31% and increase engagement by 89%. You can make some of your own calculations to add to the confusion: Google Open-Sourcing TensorFlow Shows AI's Future Is Data. When Google open sourced its artificial intelligence engine last week—freely sharing the code with the world at large—Lukas Biewald didn’t see it as a triumph of the free software movement. 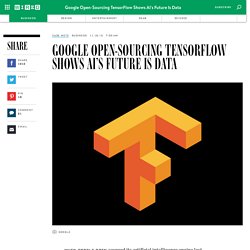 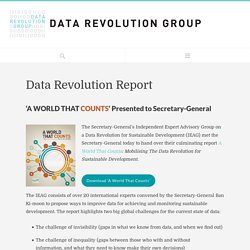 Download ‘A World That Counts’ The IEAG consists of over 20 international experts convened by the Secretary-General Ban Ki-moon to propose ways to improve data for achieving and monitoring sustainable development. Alex Pentland. Alex Paul "Sandy" Pentland (born 1952) is an American computer scientist, the Toshiba Professor at MIT, and serial entrepreneur. 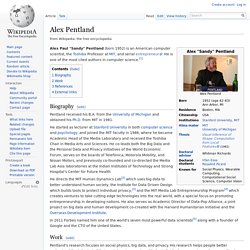 He is one of the most cited authors in computer science.[1] Biography[edit] Pentland received his B.A. from the University of Michigan and obtained his Ph.D. from MIT in 1981. Honest Signals, Reality Mining, and Sensible Organizations. Click to see video. 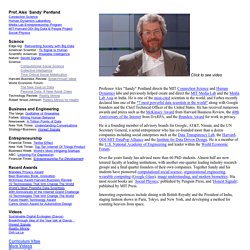 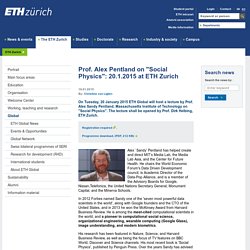 He chairs the World Economic Forum's Data Driven Development council, is Academic Director of the Data-Pop Alliance, and is a member of the Advisory Boards for Google, Nissan,Telefonica, the United Nations Secretary General, Monument Capital, and the Minerva Schools. In 2012 Forbes named Sandy one of the 'seven most powerful data scientists in the world', along with Google founders and the CTO of the United States, and in 2013 he won the McKinsey Award from Harvard Business Review. He is among the most-cited computational scientists in the world, and a pioneer in computational social science, organizational engineering, wearable computing (Google Glass), image understanding, and modern biometrics.

His research has been featured in Nature, Science, and Harvard Business Review, as well as being the focus of TV features on BBC World, Discover and Science channels. It appears big data can make us better artists, too. Big data isn’t just about the size of the data set: The discovery of new data sources is also important. 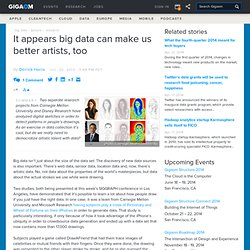 There’s web data, sensor data, location data and, now, there’s artistic data. No, not data about the properties of the world’s masterpieces, but data about the actual strokes we use while were drawing. Two studies, both being presented at this week’s SIGGRAPH conference in Los Angeles, have demonstrated that it’s possible to learn a lot about how people draw if you just have the right data. In one case, it was a team from Carnegie Mellon University and Microsoft Research having subjects play a cross of Pictionary and Wheel of Fortune on their iPhones in order to generate data. Think Big Data Is All Hype? You're Not Alone. - Arik Hesseldahl. When a phrase enters the tech industry lexicon in a big way, and has a good way of crystallizing a seemingly overarching trend, it’s usually not long before the very same phrase becomes a victim of its own overuse and is dismissed as “all hype.” 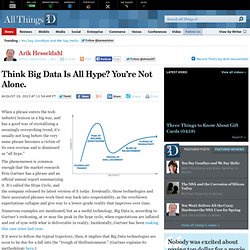 The phenomenon is common enough that the market research firm Gartner has a phrase and an official annual report summarizing it. It’s called the Hype Cycle, and the company released its latest version of it today. Eventually, those technologies and their associated phrases work their way back into respectability, as the overblown expectations collapse and give way to a lower-grade reality that improves over time.

Numerous examples are mentioned, but as a useful technology, Big Data is, according to Gartner’s reckoning, at or near the peak in the hype cycle, when expectations are inflated and out of sync with what is deliverable in reality. Incidentally, Gartner has been making this case since last year.