Buying a Firearm Online is Easy! 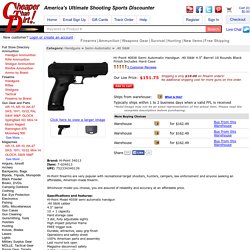 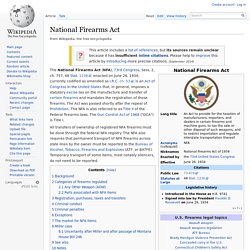 The Act was passed shortly after the repeal of Prohibition. The NFA is also referred to as Title II of the Federal firearms laws. The Gun Control Act of 1968 ("GCA") is Title I. All transfers of ownership of registered NFA firearms must be done through the federal NFA registry. The NFA also requires that permanent transport of NFA firearms across state lines by the owner must be reported to the Bureau of Alcohol, Tobacco, Firearms and Explosives (ATF, or BATFE). 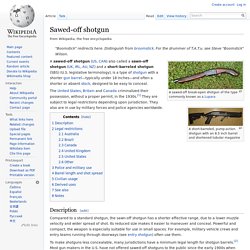 Distinguish from broomstick. For the drummer of T.A.T.u. see Steve "Boomstick" Wilson. A sawed-off break-open shotgun of the type commonly known as a Lupara. Flare gun. Types[edit] The most common type of flare gun is a Very (sometimes spelled Verey[1]), which was named after Edward Wilson Very (1847–1910), an American naval officer who developed and popularized a single-shot breech-loading snub-nosed pistol that fired flares (Very flares). 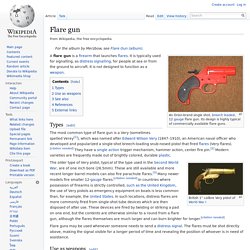 [citation needed] They have a single action trigger mechanism, hammer action, center fire pin.[2] Modern varieties are frequently made out of brightly colored, durable plastic. Short-barreled rifle. Short-barreled rifle (SBR) is a legal designation in the United States, referring to a shoulder-fired, rifled firearm with a barrel length of less than 16 inches (40.6 cm) or overall length of less than 26 inches (66.0 cm). 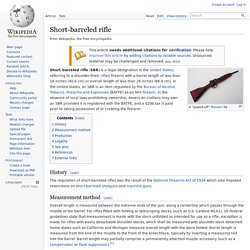 In the United States, an SBR is an item regulated by the Bureau of Alcohol, Tobacco, Firearms and Explosives (BATFE) as an NFA firearm. In the absence of local laws prohibiting ownership, American civilians may own an SBR provided it is registered with the BATFE, and a $200 tax is paid prior to taking possession of or creating the firearm. Caliber. Side on view of Sellier & Bellot .45-cal ACP cartridge with a metric ruler for scale In guns, particularly firearms, caliber or calibre is the approximate internal diameter of the barrel, or the diameter of the projectile it fires, usually shown in millimeters, or in hundredths or thousandths of an inch. 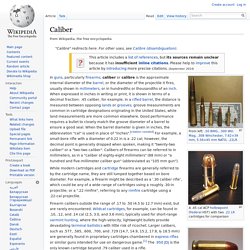 When expressed in inches in writing or print, it is shown in terms of a decimal fraction: .45 caliber, for example. In a rifled barrel, the distance is measured between opposing lands or grooves; groove measurements are common in cartridge designations originating in the United States, while land measurements are more common elsewhere. Good performance requires a bullet to closely match the groove diameter of a barrel to ensure a good seal. When the barrel diameter is given in inches, the abbreviation "cal" is used in place of "inches". Firearm calibers outside the range of .17 to .50 (4.5 to 12.7 mm) exist, but are rarely encountered. Improvised firearm. Pen gun. Homemade pen guns (Museum of the History of Donetsk militsiya). 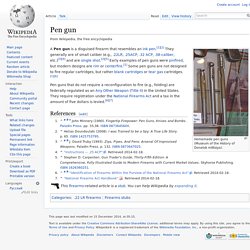 Pen guns that do not require a reconfiguration to fire (e.g., folding) are federally regulated as an Any Other Weapon (Title II) in the United States. They require registration under the National Firearms Act and a tax in the amount of five dollars is levied.[6][7] ^ Jump up to: a b c John Minnery (1990). Fingertip Firepower: Pen Guns, Knives and Bombs. Paladin Press. pp. 33,38. Cane gun. Fireworks. Fireworks Fireworks video:0 from the Expo 2010 opening ceremony in Shanghai, China. 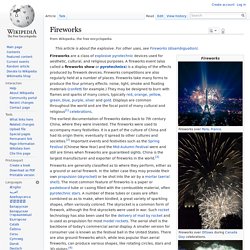 History[edit] An etching of the Royal Fireworks display on the Thames, London, England in 1749. Wallet gun. Serbu Super-Shorty. Antique firearms. Referencing the elite pastimes of hunting and writing, this Turkish ceremonial jeweled rifle set includes a dagger, pen case, penholder with pen, penknife, cleaner, and a spoon-all conveniently housed within the rifle butt, Walters Art Museum An antique firearm is a term to describe a firearm that was designed and manufactured prior to the beginning of the 20th century. 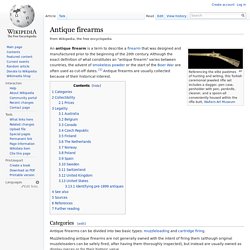 Although the exact definition of what constitutes an "antique firearm" varies between countries, the advent of smokeless powder or the start of the Boer War are often used as cut-off dates. [1] Antique firearms are usually collected because of their historical interest. Categories[edit] Muzzleloading antique firearms are not generally owned with the intent of firing them (although original muzzleloaders can be safely fired, after having them thoroughly inspected), but instead are usually owned as display pieces or for their historic value. Collectibility[edit] Prices[edit] Legality[edit] Suppressor.

CZ 452 bolt-action rimfire rifle with suppressor A suppressor, sound suppressor, or silencer is a device attached to or part of the barrel of a firearm or air gun which reduces the amount of noise and visible muzzle flash generated by firing. 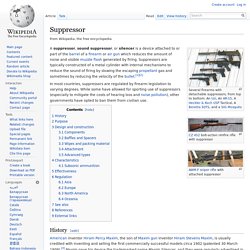 Suppressors are typically constructed of a metal cylinder with internal mechanisms to reduce the sound of firing by slowing the escaping propellant gas and sometimes by reducing the velocity of the bullet.[1][2] In most countries, suppressors are regulated by firearm legislation to varying degrees. Grenade launcher. A grenade launcher or grenade discharger is a weapon that launches a specially-designed grenade or a grenade cartridge with more accuracy, higher velocity, and to greater distances than a soldier could throw it by hand.

Grenade launchers can either come in the form of standalone weapons (either single-shot or repeating) or attachments mounted under the barrel of a rifle. Some rifles have been designed to fire rifle grenades, either from their muzzle or from a detachable muzzle-mounted launcher. Larger grenade launchers such as the Mk-19 may be mounted on vehicles. Home Page. Law Enforcement Sales - Oak Ridge, TN Your Subtitle text Welcome to Law Enforcement Sales of Oak Ridge, TN. Join NRA - The Offical Membership Form of the Naional Rifle Association. Gun law in the United States. A notice stating that the Turman Halfway House in Austin, Texas prohibits concealed handguns Gun law in the United States is defined by a number of state and federal statutes.

In the United States the protection against infringement of the right to keep and bear arms is addressed in the Second Amendment to the United States Constitution. While there have been vigorous debates on the nature of this right, there has been a lack of clear federal court rulings defining this right until recently. The individual right to bear arms for self-defense was affirmed in the landmark United States Supreme Court cases District of Columbia v.