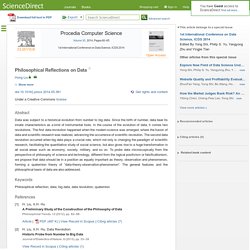 Big Data & Society. Introduction Revolutions in science have often been preceded by revolutions in measurement. 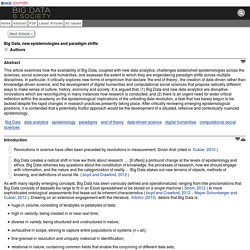 Sinan Aral (cited in Cukier, 2010) Big Data creates a radical shift in how we think about research …. [It offers] a profound change at the levels of epistemology and ethics. Big Data reframes key questions about the constitution of knowledge, the processes of research, how we should engage with information, and the nature and the categorization of reality … Big Data stakes out new terrains of objects, methods of knowing, and definitions of social life. (boyd and Crawford, 2012)As with many rapidly emerging concepts, Big Data has been variously defined and operationalized, ranging from trite proclamations that Big Data consists of datasets too large to fit in an Excel spreadsheet or be stored on a single machine (Strom, 2012) to more sophisticated ontological assessments that tease out its inherent characteristics (boyd and Crawford, 2012; Mayer-Schonberger and Cukier, 2013).

With Big Data Comes Big Responsibility. Big data and the “internet of things”—in which everyday objects can send and receive data—promise revolutionary change to management and society. 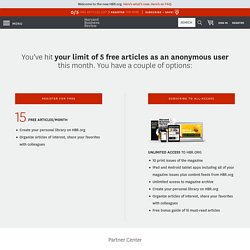 But their success rests on an assumption: that all the data being generated by internet companies and devices scattered across the planet belongs to the organizations collecting it. What if it doesn’t? Alex “Sandy” Pentland, the Toshiba Professor of Media Arts and Sciences at MIT, suggests that companies don’t own the data, and that without rules defining who does, consumers will revolt, regulators will swoop down, and the internet of things will fail to reach its potential. To avoid this, Pentland has proposed a set of principles and practices to define the ownership of data and control its flow. He calls it the New Deal on Data. 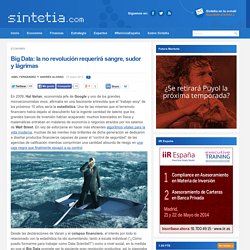 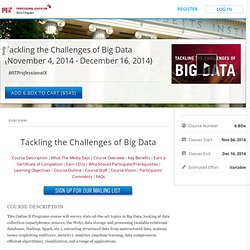 . « Back to Top Course Overview Key Benefits Learning Objectives. Course Info. Skip to this view's content Please enter your e-mail address below, and we will e-mail instructions for setting a new password. 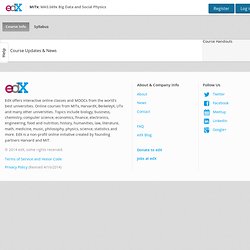 Help For questions on course lectures, homework, tools, or materials for this course, post in the course discussion forum. Have general questions about edX? You can find lots of helpful information in the edX FAQ. Have a question about something specific? Report a problem Make a suggestion Ask a question Please note: The edX support team is English speaking. Thank you for your inquiry or feedback. Course Updates & News. 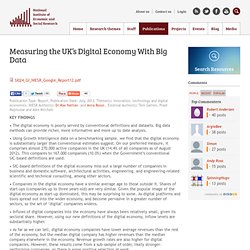 Big data methods can provide richer, more informative and more up to date analysis. • Using Growth Intelligence data on a benchmarking sample, we find that the digital economy is substantially larger than conventional estimates suggest. Do you have a Data Management Strategy? In “How Good is Your Data”, I highlighted the importance of data quality. 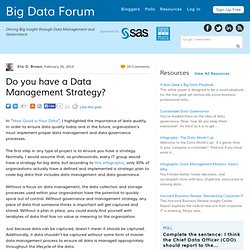 In order to ensure data quality today and in the future, organization’s must implement proper data management and data governance processes. The first step in any type of project is to ensure you have a strategy. Big Data Visualization Using Ngram Viewer. Back in 2010, the folks at Google Research released a tool called the Google Books Ngram Viewer. 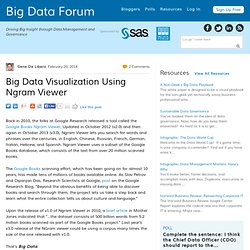 Updated in October 2012 (v2.0) and then again in October 2013 (v3.0), Ngram Viewer lets you search for words and phrases over the centuries, in English, Chinese, Russian, French, German, Italian, Hebrew, and Spanish. Ngram Viewer uses a subset of the Google Books database, which consists of the text from over 20 million scanned books. The Google Books scanning effort, which has been going on for almost 10 years, has made tens of millions of books available online. 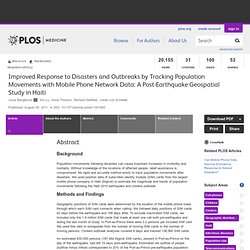 Without knowledge of the locations of affected people, relief assistance is compromised. No rapid and accurate method exists to track population movements after disasters. We used position data of subscriber identity module (SIM) cards from the largest mobile phone company in Haiti (Digicel) to estimate the magnitude and trends of population movements following the Haiti 2010 earthquake and cholera outbreak. Methods and Findings Geographic positions of SIM cards were determined by the location of the mobile phone tower through which each SIM card connects when calling.

Big-Data-in-the-Web. Big Data University. Infographic: The Four V's of Big Data. Is Big Data the Next Billion-Dollar Technology Industry? It is not news that our capacity to gather and store immense amounts of data has grown by leaps and bounds. A few years ago, it was unthinkable for a free email account to offer more than 10 or 20 megabytes of storage. Today, one stores thousands of times that amount. But that's barely scratching the surface compared to the truly massive data collection projects now under way. The Large Synoptic Survey Telescope is slated to come online in 2016.

Críticas a Big Data. Noticias de Big Data. Billion Prices Project. InPho Data Blog » Network of all thinkers (pt.1) Posted on November 9, 2012 by junotk 9 Comments Similarity relations among philosophers mentioned in the SEP, as modeled by the BEAGLE Context model. The Stanford Encyclopedia of Philosophy (SEP) and the Internet Encyclopedia of Philosophy (IEP) contain tons of descriptions about a large number of thinkers. It is thus of interest to see how these thinkers are related/categorized by a semantic model of the text.

This and the next posts show some results from my preliminary attempts to visualize these relationships. The image shows the network created from the similarity matrix of all thinkers appearing in the SEP (Beagle context model). Node/font sizes are proportional to node degree (# of edges).Node configuration was determined using ForceAtlas2 algorithm.Colors indicates modules detected by the built-in algorithm. Here are some details of methods. It would be interesting to apply the same method to: Comparison with IEP.Comparison between English vs. I’ll work on (1) in the next post. Internet 2012 in numbers. Posted in Tech blog on January 16th, 2013 by Pingdom There is so much happening on the Internet during a year that it’s impossible to capture it all in a blog post, but we’re going to give it a shot anyway.