Big Data: A Perspective from the BLS. I’m pleased to have Bureau of Labor Statistics Associate Commissioner Michael W. 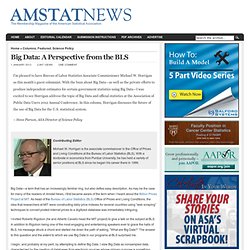 Horrigan as this month’s guest columnist. With the buzz about Big Data—as well as the private efforts to produce independent estimates for certain government statistics using Big Data—I was excited to see Horrigan address the topic of Big Data and official statistics at the Association of Public Data Users 2012 Annual Conference. In this column, Horrigan discusses the future of the use of Big Data for the U.S. statistical system. ~ Steve Pierson, ASA Director of Science Policy Contributing EditorMichael W. 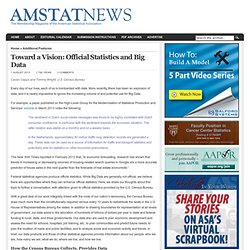 Census Bureau Every day of our lives, each of us is bombarded with data. More recently, there has been an explosion of data, and it is nearly impossible to ignore the increasing volume of and potential use for Big Data. For example, a paper published on the High-Level Group for the Modernisation of Statistical Production and Services’ website in March 2013 notes the following: The sentiment in Dutch social media messages was found to be highly correlated with Dutch consumer confidence; in particular with the sentiment towards the economic situation. In the Netherlands, approximately 80 million traffic loop detection records are generated a day. The New York Times reported in February 2012 that, “In economic forecasting, research has shown that trends in increasing or decreasing volumes of housing-related search queries in Google are a more accurate predictor of house sales in the next quarter than the forecasts of real estate economists.” 1. 2. 3. 4. 1.

Welcome to Forbes. A brief history of big data, the Noam Chomsky way. The next big data IPO Sumo Logic is aiming to go public in 2015, following Splunk and Tableau Software into the market in response to the big appetite from investors for any company with the words "big data" or "data analytics" in an S-1 filing. 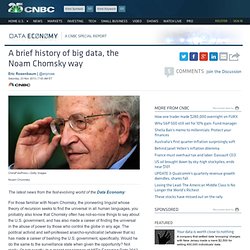 Its chief executive recently spoke to Reuters with the kind of IPO road show talk you're not allowed to use when you're actually in an IPO period but can use liberally before that period begins. CEO Vance Loiselle told Reuters revenue is going to grow ten times this year. Sumo projects 300 percent revenue growth next year, though true to the private company mold, reveals no actual revenue figure. Researchers Draw Romantic Insights From Maps of Facebook Networks. Cameron Marlow/FacebookA graphical representation of one person’s network neighborhood on Facebook. 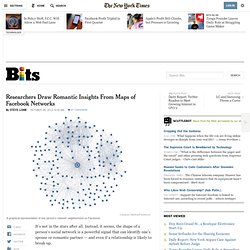 It’s not in the stars after all. Instead, it seems, the shape of a person’s social network is a powerful signal that can identify one’s spouse or romantic partner — and even if a relationship is likely to break up. So says a new research paper written by Jon Kleinberg, a computer scientist at Cornell University, and Lars Backstrom, a senior engineer at Facebook. The paper, posted online on Sunday, will be presented at a conference on social computing in February. The pair used a hefty data set from Facebook as their lab: 1.3 million Facebook users, selected randomly from among all users who are at least 20 years old, with from 50 to 2,000 friends, who list a spouse or relationship partner in their profile. Their key finding was that the total number of mutual friends two people share — embeddedness, in social networking terms — is actually a fairly weak indicator of romantic relationships. 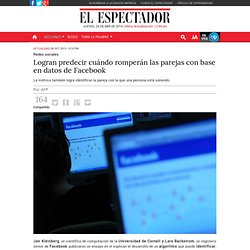 Why is there so Much Statistical Redundancy in Big... - Lithosphere Community. For the last few weeks, I’ve been talking about the data-information inequality: information << data. 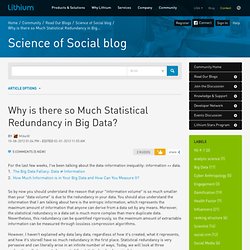 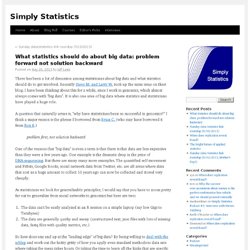 Recently Steve M. and Larry W. took up the same issue on their blog. Statistics and Big Data. I am late, I know… I came back last week from the NTTS (New Techniques and Technologies for Statistics) 2013 conference in Brussels and have not yet had a minute to stop and write down my impressions. 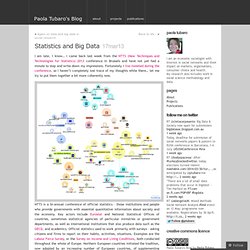 Fortunately I live-tweeted during the conference, so I haven’t completely lost trace of my thoughts while there… let me try to put them together a bit more coherently now. NTTS is a bi-annual conference of official statistics – those institutions and people who provide governments with essential quantitative information about society and the economy. Key actors include Eurostat and National Statistical Offices of countries, sometimes statistical agencies of particular ministries or government departments, as well as international institutions that also produce data such as the OECD, and academics. Official statistics used to work primarily with surveys – asking citizens and firms to report on their habits, activities, situations. Watson, el superordenador de IBM que ganó Jeopardy, comienza a responder el teléfono. 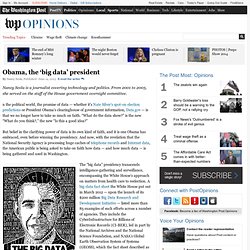 A ­big-data fact sheet the White House put out in March 2012 — upon the launch of its $200 million Big Data Research and Development Initiative — listed more than 85 examples of such efforts across a number of agencies. They include the CyberInfrastructure for Billions of Electronic Records (CI-BER), led in part by the National Archives and the National Science Foundation, and NASA’s Global Earth Observation System of Systems (GEOSS), which the fact sheet described as a “collaborative, international effort to share and integrate Earth observation data.” Big Data News.

How IBM’s computers are blocking injuries on the rugby pitch. Rugby is a rough sport but it requires very little protective gear. 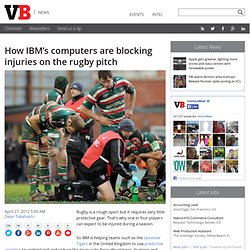 That’s why one in four players can expect to be injured during a season. So IBM is helping teams such as the Leicester Tigers in the United Kingdom to use predictive analytics to understand and reduce the injury rate for rugby players. As more and more money is at stake in pro sports, the science of analysis is proving its worth.

It’s a lot like how general manager Billy Beane introduced the Oakland A’s to analytics in Moneyball, and now these concepts are spreading to many different industries. Losing a player for an extended period can hurt a team on the field and reduce ticket sales. Unlike spreadsheet-based statistical solutions, IBM’s predictive analytics software is designed to enable Leicester Tigers to broaden and deepen the analysis of both objective and subjective raw data, such as fatigue levels and game intensity levels, for all 45 players in the squad. For Todays Graduate, Just One Word - Statistics. Even the recently ended Netflix contest, which offered $1 million to anyone who could significantly improve the company’s movie recommendation system, was a battle waged with the weapons of modern statistics.

Though at the fore, statisticians are only a small part of an army of experts using modern statistical techniques for data analysis. Computing and numerical skills, experts say, matter far more than degrees. So the new data sleuths come from backgrounds like economics, computer science and mathematics. They are certainly welcomed in the White House these days. “Robust, unbiased data are the first step toward addressing our long-term economic needs and key policy priorities,” Peter R.