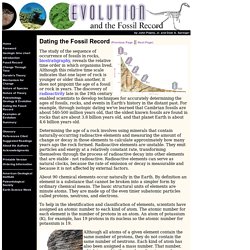 Fossils, Rocks, and Time: Fossil Succession. If we begin at the present and examine older and older layers of rock, we will come to a level where no fossils of humans are present. 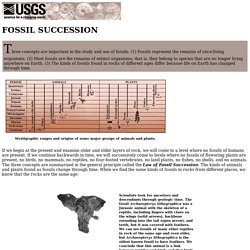 If we continue backwards in time, we will successively come to levels where no fossils of flowering plants are present, no birds, no mammals, no reptiles, no four-footed vertebrates, no land plants, no fishes, no shells, and no animals. The three concepts are summarized in the general principle called the Law of Fossil Succession: The kinds of animals and plants found as fossils change through time. When we find the same kinds of fossils in rocks from different places, we know that the rocks are the same age. How do scientists explain the changes in life forms, which are obvious in the record of fossils in rocks? Early explanations were built around the idea of successive natural disasters or catastrophes that periodically destroyed life. Australia's fossil past. Australia, the world's oldest visible geology. 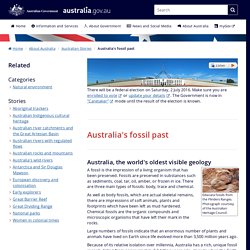 Origins of the Universe, Big Bang Theory Information, Big Bang Facts, News, Photos. The most popular theory of our universe's origin centers on a cosmic cataclysm unmatched in all of history—the big bang. This theory was born of the observation that other galaxies are moving away from our own at great speed, in all directions, as if they had all been propelled by an ancient explosive force. Before the big bang, scientists believe, the entire vastness of the observable universe, including all of its matter and radiation, was compressed into a hot, dense mass just a few millimeters across.

Researchers may have solved origin-of-life conundrum. The origin of life on Earth is a set of paradoxes. 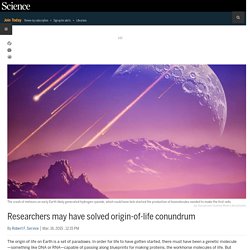 In order for life to have gotten started, there must have been a genetic molecule—something like DNA or RNA—capable of passing along blueprints for making proteins, the workhorse molecules of life. But modern cells can’t copy DNA and RNA without the help of proteins themselves. To make matters more vexing, none of these molecules can do their jobs without fatty lipids, which provide the membranes that cells need to hold their contents inside. And in yet another chicken-and-egg complication, protein-based enzymes (encoded by genetic molecules) are needed to synthesize lipids. GCSE Bitesize: How did life start? Fossil Record. The fossil record is life’s evolutionary epic that unfolded over four billion years as environmental conditions and genetic potential interacted in accordance with natural selection. 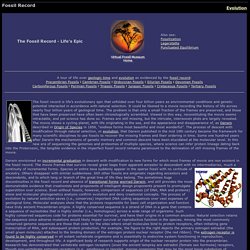 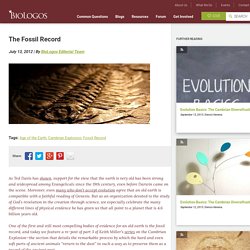 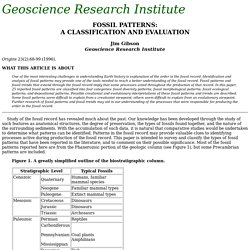 Gaps in the Fossil Record of Evolution — what their explanation is. And yet, here we’re concerned with the tiny group of lobe-finned fish, which was much more diverse back then, because it is from them that our common ancestors, the amphibians, emerged. 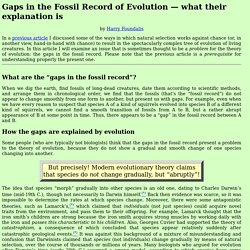 According to this Wikipedia article, lobe-finned fish “are bony fish with paired rounded fins. These fins, being similar to limbs, suggest that these fish may be ancestors of land vertebrates.” Among the lobe-finned bony fish that existed back then, there were two main types: the coelacanths, which lived in the oceans (and, as I said above, only two species of them survive today), and the rhipidistians, which are of particular interest to us. 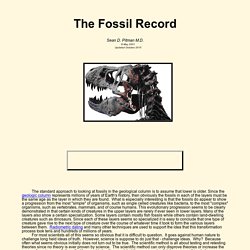 Pitman M.D. © May 2001 Updated October 2015. Earth's Beginnings: The Origins of Life. Earth is the only planet we know of that can support life. 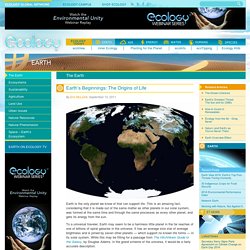 This is an amazing fact, considering that it is made out of the same matter as other planets in our solar system, was formed at the same time and through the same processes as every other planet, and gets its energy from the sun. To a universal traveler, Earth may seem to be a harmless little planet in the far reaches of one of billions of spiral galaxies in the universe. It has an average size star of average brightness and is joined by seven other planets — which support no known life forms — in its solar system. GCSE Bitesize: Fossil records. BBC Nature - History of life on Earth. Timeline: The evolution of life. By Michael Marshall There are all sorts of ways to reconstruct the history of life on Earth. Pinning down when specific events occurred is often tricky, though. For this, biologists depend mainly on dating the rocks in which fossils are found, and by looking at the “molecular clocks” in the DNA of living organisms.

There are problems with each of these methods. The fossil record is like a movie with most of the frames cut out. Modern genetics allows scientists to measure how different species are from each other at a molecular level, and thus to estimate how much time has passed since a single lineage split into different species. These difficulties mean that the dates in the timeline should be taken as approximate. 3.8 billion years ago? This is our current “best guess” for the beginning of life on Earth.

At some point far back in time, a common ancestor gave rise to two main groups of life: bacteria and archaea. 3.5 billion years ago. Smithsonian - Dinosaurs in Our Backyard - Finding Fossils. Lots of fossils are still in the ground awaiting discovery. Here you can learn about maps and other resources that may help you find them. Were there dinosaurs in your backyard? Click to zoom, then drag the magnifying glass across the map to take an even closer look. Extinctions in the Fossil Record [and Discussion] on JSTOR. Extinctions and Biodiversity in the Fossil Record.

Disappearance of stromatolites, earliest visible manifestation of life: Ancient enigma solved? The widespread disappearance of stromatolites, the earliest visible manifestation of life on Earth, may have been driven by single-celled organisms called foraminifera. The findings, by scientists at Woods Hole Oceanographic Institution (WHOI); Massachusetts Institute of Technology; the University of Connecticut; Harvard Medical School; and Beth Israel Deaconess Medical Center, Boston, were published online the week of May 27 in the Proceedings of the National Academy of Sciences.

Stromatolites ("layered rocks") are structures made of calcium carbonate and shaped by the actions of photosynthetic cyanobacteria and other microbes that trapped and bound grains of coastal sediment into fine layers. They showed up in great abundance along shorelines all over the world about 3.5 billion years ago.

The growing bacterial community secreted sticky compounds that bound the sediment grains around themselves, creating a mineral "microfabric" that accumulated to become massive formations. Disappearance of World’s Oldest Fossils Solved. Ancient Origins seeks to uncover, what we believe, is one of the most important pieces of knowledge we can acquire as human beings – our beginnings. While many believe that we already hold such knowledge, our view is that there still exists a multitude of anomalies and mysteries in humanity's past that deserve further examination.

We therefore wish to foster an open community that is dedicated to investigating, understanding and explaining the origins of our species on planet earth. To this end, we aim to organize, support and even finance efforts in this direction. Our aim is to move beyond theories and to present a thorough examination of current research and evidence and to offer alternative viewpoints and explanations to those currently held by mainstream science and archaeology. Come with us on a journey to explore lost civilisations, sacred writings, ancient places, unexplained artefacts and scientific mysteries while we seek to reconstruct and retell the story of our beginnings.

Homo erectus. Homo erectus Where Lived: Northern, Eastern, and Southern Africa; Western Asia (Dmanisi, Republic of Georgia); East Asia (China and Indonesia) When Lived: Between about 1.89 million and 143,000 years ago. Neanderthals Died Out 10,000 Years Earlier Than Thought, With Help From Modern Humans. The Neanderthals died out about 10,000 years earlier than previously thought, new fossil dating suggests, adding to evidence that the arrival of modern humans in Europe pushed our ancient Stone Age cousins into extinction.

Evolution and the Fossil Record by John Pojeta, Jr. and Dale A. Springer. Fossil of ancient multicellular life sets evolutionary timeline back 60 million years. A Virginia Tech geobiologist with collaborators from the Chinese Academy of Sciences have found evidence in the fossil record that complex multicellularity appeared in living things about 600 million years ago -- nearly 60 million years before skeletal animals appeared during a huge growth spurt of new life on Earth known as the Cambrian Explosion. The discovery published online Wednesday in the journal Nature contradicts several longstanding interpretations of multicellular fossils from at least 600 million years ago.

"This opens up a new door for us to shine some light on the timing and evolutionary steps that were taken by multicellular organisms that would eventually go on to dominate the Earth in a very visible way," said Shuhai Xiao, a professor of geobiology in the Virginia Tech College of Science. The discovery sheds light on how and when solo cells began to cooperate with other cells to make a single, cohesive life form. Commonly found fossils. Belemnites 'If you find a bullet-shaped fossil you could well have found the remnants of an ancient squid.

Pre-Cambrian microfossils discovered in rocks in southern China hint that complex multicellular life may have appeared as early as 600 million years ago. This Megasphaera fossil displays unexpected evidence of complexity: arrow marks a matryoshka and arrowhead denotes dyads. Scale bar – 100 μm. New 600-Million-Year-Old Fossil is the World's Oldest Sponge. We shared a common ancestor with SpongeBob SquarePants hundreds of millions of years ago, though exactly how long ago has been up for debate. Now, analyses of a newly discovered 600-million-year-old fossil suggests that sponge-like animals predate the Cambrian by 60 million years.

And if an advanced sponge-like form was already around during the Precambian period, that means that similarly advanced fossils of our (very early) ancestors from that long ago are also waiting to be found. 600-Million-Year-Old Embryos Found. By William J. The Paleontology Portal - Fossils in US National Parks. Our national parks have been described as our country's greatest treasure — full of natural wonders, history, cultural icons, and places to explore — to be safeguarded for all time. Many of these parks are also the home to fossils! The markers on the map below indicate those National Parks where fossils have been found or where they exist in collections. OZ fossils. Featured Articles. Fossil Calibration Database.