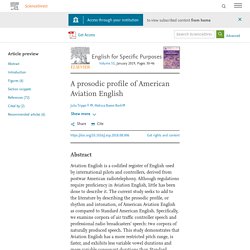 As a form of radiotelephony, Aviation English Standard Phraseology is designed to be decipherable without face-to-face contact, in a time-critical environment that includes radio static and multiple speakers sharing a single radio frequency (International Civil Aviation Organization (ICAO), 2004, Philps, 1991, Melnichenko and Melnichenko, 2008). Aviation English messages must be conveyed quickly and concisely via clear, emotionless delivery (Prinzo, Lieberman, & Pickett, 1998). Aviation English radiotelephony also requires speakers to audibly occupy the radio frequency or risk being interrupted. . … cases, where phraseology provides no ready-made form of communication, pilots and [air traffic] controllers must resort to plain language (ICAO, 2010: 3.3.13.) □ Rocket Parachute blew the lid off my Scrappy Bush Plane □ (Scrappy 27) No One Can Explain Why Planes Stay in the Air.

In December 2003, to commemorate the 100th anniversary of the first flight of the Wright brothers, the New York Times ran a story entitled “Staying Aloft; What Does Keep Them Up There?” 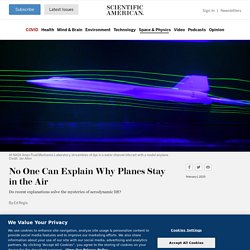 ETX680 - EarthX Lithium Batteries - OEM LIthium Batteries for All Motor Sports. How are pilots different from the average person? Budd Davisson's Airbum.com. B777 Cockpit View 4K. Recreational Aviation Foundation. Arizona Ultralight Aviation - Home. Planes for Sale. Settlement reached in Yakima airport eviction case. A nearly $1 million settlement in a wrongful eviction case at Yakima Air Terminal has ended years of uncertainty for the city of Yakima and Yakima County, which once faced the prospect of paying millions of dollars to former tenant M.A. 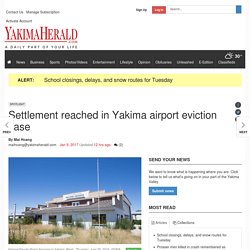 West Rockies. Instead, the city and county, which co-owned the airport at the time of the 2010 eviction, will split a payment of $18,750, said Don Anderson, Yakima County legal counsel. The majority of the settlement is expected to be paid by insurers of Yakima Air Terminal and Yakima law firm Lyon Weigand and Gustafson, which is settling a spinoff case with the city of Yakima.

The airport’s insurance companies had previously filed lawsuits arguing that it should not have to pay for damages, but those involved in the case said they have agreed to pay the reduced amount. Gyroplane. The Training Train in your AutoGyro or ours. 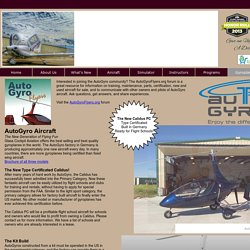 We have an excellent safety record and understand how to train you so that you can continue to operate your aircraft in a safe manner. Since safety has always been our foremost priority (we have the best safety record of any flight school in Boise), our training program follows a structured syllabus of ground and flight training with an emphasis on good decision making. Backcountry surprise - AOPA. On the ramp outside the CubCrafters factory in Yakima, Washington, the XCub is striking for its aerodynamically clean lines and exceptional fit and finish. 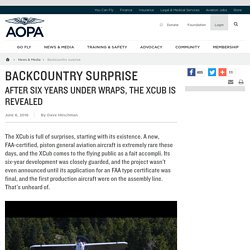 The speed mods start with the spring aluminum landing gear (not bungees), carbon fiber fairings, and internal pushrod controls instead of draggy pulleys and wires. This airplane, the third XCub the factory has produced, is halfway through an FAA-mandated 50-hour flight test period. The only practical implication of that, for me, is that during the test period it’s limited to one occupant—so CubCrafters President Randy Lervold will stay on the ground rather than coach me from the backseat.

The CubCrafters XCub brings speed and range to the backcountry. New Page 1. I have compiled this list from the message board and emails that I have received and cut and pasted here. 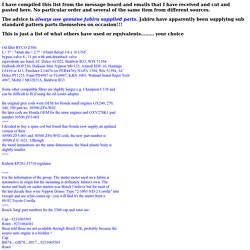 No particular order and several of the same item from different sources. The advice is always use genuine Jabiru supplied parts. Jabiru have apparently been supplying sub standard pattern parts themselves on occasion!!! This is just a list of what others have used or equivalents......... your choice. On the Mark: How Airports Can Help Revitalize the Aviation Industry. Gmail - Free Storage and Email from Google. Aerolite 103 prices. The Aerolite 103 is a professionally built, ready-to-fly, legal Part 103 single-seat ultralight type aircraft. 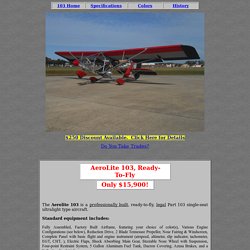 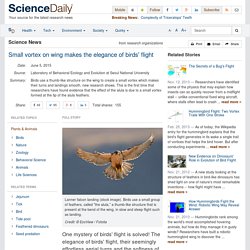 The elegance of birds' flight, their seemingly effortless aerial turns and the softness of their landing, have been envied by many people. From countless observations, it has been known that the birds use a small group of feathers, called "the alula," a thumb-like structure that is present at the bend of the wing, in slow and steep flight such as landing. Why do they use it? How the tiny feathers can help them land softly? Operation Peace Flight: Israel to Jordan. Beginner's Guide to Aeronautics. In the 21st century, airplanes are a normal part of everyday life. 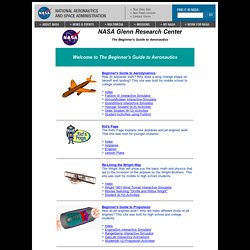 We see them fly over, or read about them, or see them on television. Most of us have traveled on an airplane, or we know someone who has. Do you ever wonder how airplanes fly? What causes the lift that gets the airplane off the runway? How To Win In A Dogfight: Stories From A Pilot Who Flew F-16s And MiGs. AeroMobil: Flying car. As part of AeroMobil’s team, Martin is responsible for company’s strategy, business development, financing and regulatory affairs. 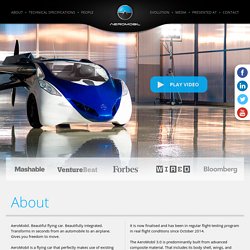 Martin is a technology entrepreneur, investor, and former public policy leader. He holds management, board, and advisory positions in several globally innovative deep technology companies from Europe, covering areas from engineering, through biotech, to fin tech.He is the founder and former executive chairman of Neulogy, the first major advisory and investment boutique in Central and Eastern Europe focusing on R&D and technology start ups. Previously, Martin was a Senior Director and Head of Europe at the World Economic Forum.

He also held several senior positions in the Government of Slovakia, including junior minister for innovations and deputy for European affairs of the minister of finance. B.A. ifrom Stanford University and M.P.A. from Harvard Kennedy School. How midbrain map continuously updates visuospatial memory. On the upcoming Super Bowl Sunday, a lot of us will be playing arm-chair quarterback. After the snap, we might use our eyes to track a wide receiver as he runs toward an opening, all the while remembering the location of the star running back in case he breaks through on a rushing play. This natural ability to track one moving player but be ready to quickly look back toward another one sounds simple. But the science behind it is not so simple. In a groundbreaking study, York university researchers have discovered how a map in the midbrain remembers the location of visual targets even as the eyes follow another object.

331 The Good, The Bad, and The TSA. Podcast: Play in new window | Download How the TSA treats a man marked as a terrorist, an inside job smuggling guns on an airline, airport security concerns, a former Korean Air executive arrested, United and Orbitz sue over the “hidden city” ticketing strategy, and an AirAsia QZ8501 update. Guest After being convicted of releasing animals from fur farms in 2005, Peter Young was labeled a “terrorist” by the TSA.

Since then, flying has been quite interesting for Peter. You see, Peter was placed on the TSA’s Selectee List. Peter has since experienced all manner of “special treatment” from the TSA. In October 2014, Young launched The Jetsetting Terrorist blog, to document his often hilarious but never boring experiences with the TSA as he travels around the U.S. marked as a “terrorist.” News 4 large objects found in AirAsia wreckage and victims search Arrest warrant for ex-Korean Air exec in nut rage Gun Smuggling on Plane Reveals Security Oversight David Vanderhoof’s Airplane of the Week Credit. Find airplanes near you. YO-3A. Policy on the Non-aeronautical Use of Airport Hangars. You may send comments [identified by Docket Number FAA-2014-0463] using any of the following methods: Government-wide rulemaking Web site: Go to and follow the instructions for sending your comments electronically.