The Cities You Need To See In Your Lifetime  A large flock of starlings fly illuminated by the setting sun near Bacau, north eastern Romania, Tuesday, Dec. 10, 2013. 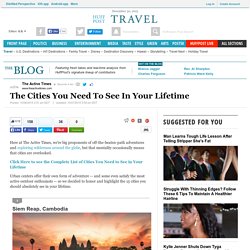 Large numbers of starlings populate the vast cereal growing agricultural lands in eastern Romania, feeding on the seeds already laid in the ground. 30 Places To See Before You're 30  A large flock of starlings fly illuminated by the setting sun near Bacau, north eastern Romania, Tuesday, Dec. 10, 2013. 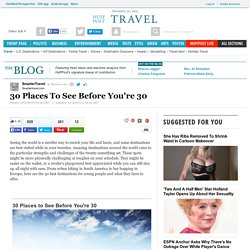 Large numbers of starlings populate the vast cereal growing agricultural lands in eastern Romania, feeding on the seeds already laid in the ground. (Vadim Ghirda/AP) In this late Thursday, Nov. 28, 2013 photo taken using long exposure, star trails are seen over Mount Sinabung as it spews volcanic ash into the air as seen from Tiga Pancur, North Sumatra, Indonesia. Authorities raised the alert status of the volcano to the highest level on Sunday after it had a series of eruptions. Flying Robot International Film Festival Set To Land In San Francisco. How to Turn Vacation Time Into a Life-Changing Career. National Geographic's energy innovators aren't waiting for governments to tackle the fact that 1.3 billion people live without power. 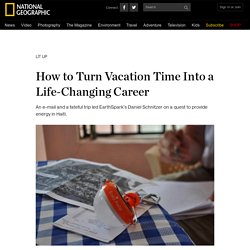 They're lighting the way themselves, and not always for the reasons you'd think. In our series Lit Up, they share lessons and inspiration that go far beyond solar panels and light bulbs. Their quotes have been edited and condensed for length and clarity. Seven years ago, Daniel Schnitzer got an e-mail from a stranger that would change many lives. A Haitian-born man living in the U.S. wrote him for help in building a wind turbine to power streetlights in his town back home. 11 Reasons Guam Is The Most Exotic Destination In America. What happens if you mix Texas with Hawaii? 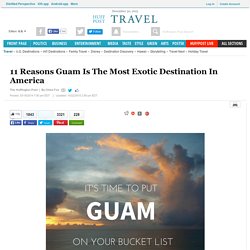 You'd probably get a remote island paradise that looks a lot like Guam: an island with a rich culture, a contentious and diverse colonial history and absolutely stunning vistas. In many ways, Guam seems like a wonderfully unique contradiction. It's a remote island and an international melting pot; it's an American territory, and the gateway to Asia; it's home to an intensely local culture, but it's filled with outsiders. And to top it all off, it's just beautiful. Below, the 11 reasons Guam just might be America's most interesting and exotic destination. 1.

Apra Harbor 2. 14 Adventures to Add to Your Bucket List ASAP  Photo: Michael Matti You've probably started a list already and spent countless hours behind your computer daydreaming...but here are a few of our favorites that you might want to take a look at. 1. 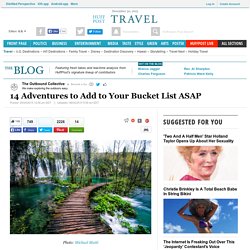 Plitvice Lakes National Park, Croatia Hike through Croatia's largest National Park to a series of beautiful lakes and waterfalls. 7 Amazing Journeys That Should Be On Your Bucket List. If you’re looking for an unforgettable bucket list journey then look no further. 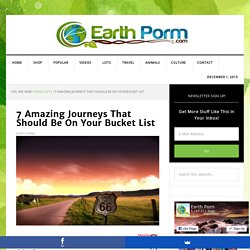 Whether you want to travel by foot, boat or car then this list surely has a journey for you… 1. The Great Wall of China The Great Wall of China is one of the Seven Wonders, a man-made creation that’s as big as it is majestic. The incredible wall which was started in 500BC flows through the mountains of China and the path ascends and defends with the slope of the hills, making it no easy feat to walk. As the wall is 13,170 miles long, you could be forgiven for not completing the entire journey but walking at least a portion of the Great Wall of China should definitely be on your bucket list. 2. Situated 100 miles inside of the Arctic Circle, the King’s Trail is an adventure like no other. It takes travelers out into the pristine wilderness, more often than not bringing them face to face with majestic herds of wild reindeer and letting them sleep below the glory of the Northern Lights. 3.

This $1 Flight Is Going Nowhere, For The Greatest Reason. Amelia Earhart on Motivation, Education, and Human Nature in Letters to Her Mother. When Amelia Earhart, born on July 24, 1897, disappeared over the Pacific on July 2, 1937, she left behind a legacy shrouded in legend, glory, and modern-day mythmaking. 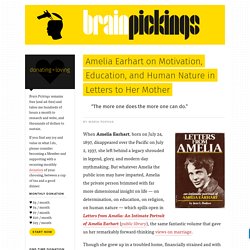 But whatever Amelia the public icon may have imparted, Amelia the private person brimmed with far more dimensional insight on life — on determination, on education, on religion, on human nature — which spills open in Letters from Amelia: An Intimate Portrait of Amelia Earhart (public library), the same fantastic volume that gave us her remarkably forward-thinking views on marriage. Though she grew up in a troubled home, financially strained and with an alcoholic father, Amelia’s determination and independence were evident from an early age: In March of 1914, aged 17, she wrote in a letter to a school friend: Of course I’m going to [Bryn Mawr] if I have to drive a grocery wagon to accumulate the cash. I am taking Modern Drama Literature, German and German Literature outside. A few days later, she adds in another letter: The International Highline Meeting is the world's most extreme camping trip.

We've featured some pretty crazy elevated camping tents here in the past, but they were probably never meant for the kind of extreme camping done by the thrill seekers who attend the International Highline Meeting each year. 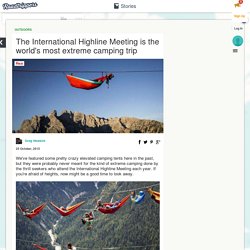 These Sleek New Supersonic Jets Will Likely Start Flights In 2023.