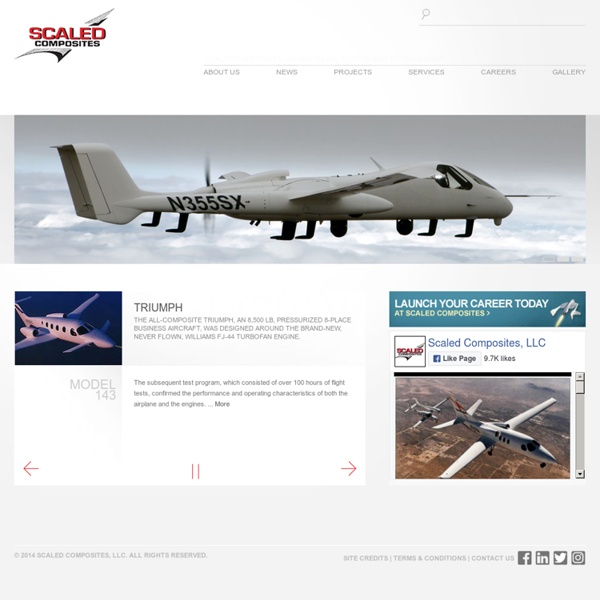 Virgin Galactic Aviation, Defense and Space News, Jobs, Conferences by AVIATION WEEK Burt Rutan Elbert Leander "Burt" Rutan (born June 17, 1943) is an American aerospace engineer noted for his originality in designing light, strong, unusual-looking, energy-efficient aircraft. He designed the record-breaking Voyager, which was the first plane to fly around the world without stopping or refueling, and the sub-orbital spaceplane SpaceShipOne, which won the Ansari X-Prize in 2004 for becoming the first privately funded spacecraft to enter the realm of space twice within a two-week period. He has five aircraft on display in the National Air and Space Museum in Washington, D.C., United States: SpaceShipOne, the Virgin Atlantic GlobalFlyer, Voyager, Quickie, and the VariEze.[1] Life and career[edit] Born in 1943 in Estacada, Oregon, 30 miles southeast of Portland, and raised in Dinuba, California, Rutan displayed an early interest in aircraft design. In 1982, Beechcraft contracted Rutan's Scaled Composites to refine the design and build the prototype Beechcraft Starship. Homebuilts[edit]

Daily Wisdom If you tell yourself that you are happy, miserable or bored, you have already separated yourself from that particular sensation that is there inside you. U.G. Krishnamurti The universe is a quantum computer Seth Lloyd WHAT is the universe made of? Matter or energy? Particles or strings? According to physicist Vlatko Vedral's appealing new book, it is made, at bottom, of information. In other words, if you break the universe into smaller and smaller pieces, the smallest pieces are, in fact, bits. With this theme in mind, Vedral embarks on an exuberant romp through physics, biology, philosophy, religion and even personal finance. Any system that has two distinct states can act as a bit - even an individual elementary particle: "electron over here" represents zero, "electron over there" represents one. At this smallest of scales, however, the universe is governed by the famously weird laws of quantum mechanics. Over the last two decades, a flourishing field of quantum information and computation has generated a wealth of experimental and theoretical tests of information processing at the quantum scale.

Photojournal: NASA's Image Access Home Page Rutan Voyager - Smithsonian National Air and Space Museum On December 23, 1986, Voyager completed the first nonstop, non-refueled flight around the world. Voyager, a unique aircraft constructed almost entirely of lightweight graphite-honeycomb composite materials and laden with fuel, lifted from Edwards AFB, California at 8:01:44 a.m., Pacific Standard Time, on Dec. 14 1986, and returned 9 days later at 8:05:28 a.m., Pacific Standard Time on Dec. 23, 1986. For their record-breaking flight, the pilots, Dick Rutan and Jeana Yeager, the designer, Burt Rutan, and the crew chief, Bruce Evans, earned the Collier Trophy, aviation's most prestigious award. Voyager is the result of six years of design, construction, and development by a talented team of individuals. The aircraft was designed by Burt Rutan, Dick's brother, a well-known designer of homebuilt airplanes such as the VariViggen and VariEze and corporate aircraft such as the Beech Starship. Gift of Dick Rutan and Jeanna Yeager Country of Origin United States of America Manufacturer Date Location

50 Life Secrets and Tips Memorize something everyday.Not only will this leave your brain sharp and your memory functioning, you will also have a huge library of quotes to bust out at any moment. Poetry, sayings and philosophies are your best options.Constantly try to reduce your attachment to possessions.Those who are heavy-set with material desires will have a lot of trouble when their things are taken away from them or lost. Possessions do end up owning you, not the other way around. Become a person of minimal needs and you will be much more content.Develop an endless curiosity about this world.Become an explorer and view the world as your jungle. Read “Zen and the Art of Happiness” by Chris Prentiss.This book will give you the knowledge and instruction to be happy at all times regardless of the circumstances. Wouldn’t it be awesome if you could boldly display 50 life secrets and tips on your wall to serve as a beautiful, daily reminder of how to live a Higher Existence?