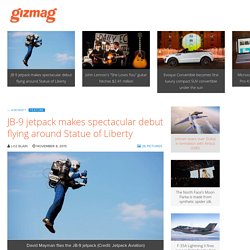 Lifting off from a boat, inventor and aviator David Mayman flew the powerful, agile JB-9 around the Statue of Liberty, pausing to salute and pirouette before touching back down. Incredible Close-Up Footage of A-10 Buzzing A Lucky Man. Star Alliance to expand network with low-cost airlines. Star Alliance will add low-cost and 'hybrid' airlines to its network, with South African carrier Mango first to sign up under a new 'Connecting Partner Model'. 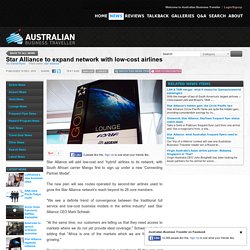 The new plan will see routes operated by second-tier airlines used to grow the Star Alliance network's reach beyond its 28 core members. "We see a definite trend of convergence between the traditional full service and low-cost business models in the airline industry" said Star Alliance CEO Mark Schwab. "At the same time, our customers are telling us that they need access to markets where we do not yet provide ideal coverage," Schwab admitted, adding that "Africa is one of the markets which we are focussed on growing.

" Is inferior seating dragging down 787s? If Air NZ’s 787s are a guide, Qantas will need more generous seating to make this jet tolerable. 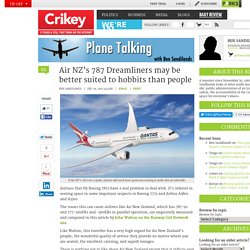 Airlines that fly Boeing 787s have a real problem to deal with. It’s inferior in seating space in some important respects to Boeing 777s and Airbus A380s and A350s. The issues this can cause airlines like Air New Zealand, which has 787-9s and 777-200ERs and -300ERs in parallel operation, are exquisitely measured and compared in this article by John Walton on the Runway Girl Network site. Like Walton, this traveller has a very high regard for Air New Zealand’s people, the wonderful quality of service they provide no matter where you are seated, the excellent catering, and superb lounges. Air New Zealand’s charter is surely to carry normal sized New Zealanders, not hobbits. Drone flight powered by lightweight hydrogen-producing pellets.

At first glance, hydrogen fuel cells sound like a great power source for fixed-wing drones making long flights – they have much longer run times than batteries, and they emit no emissions other than water vapor. 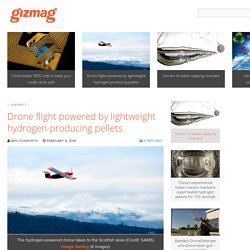 Unfortunately, the hydrogen typically has to be stored in large heavy pressurized tanks. Last month, however, a Raptor E1 electric drone made a successful test flight running on a unique new system that's actually lighter than the lithium-ion battery it replaced. The flight was carried out on Jan. 19th at Scotland's Oban Airport, by a team from the Scottish Association for Marine Science (SAMS). Although the flight only lasted 10 minutes with the drone cruising at an altitude of 80 m (262 ft), the fuel cell reportedly had enough fuel to fly for two hours. That fuel took the form of approximately 100 small solid pellets contained within an unpressurized cartridge. Ultimately, the technology may even be integrated into full-size passenger-carrying aircraft. About the Author. Shakes on a plane: How dangerous is turbulence? If you have ever travelled on an aeroplane, the chances are you have experienced some form of turbulence. 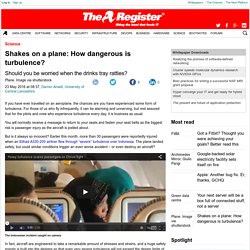 For those of us who fly infrequently, it can be alarming and unnerving, but rest assured that for the pilots and crew who experience turbulence every day, it is business as usual. You will normally receive a message to return to your seats and fasten your seat belts as the biggest risk is passenger injury as the aircraft is jostled about. But is it always so innocent? Earlier this month, more than 30 passengers were reportedly injured when an Etihad A330-200 airliner flew through “severe” turbulence over Indonesia. The plane landed safely, but could similar conditions trigger an even worse accident – or even destroy an aircraft? The Indonesian incident caught on camera Wings are designed to withstand a load 1.5 times that which they would usually experience in flight. What is turbulence? Youtube Video The Swiss cheese model made simple. Cockpit Conversation. This story starts about five years ago when I first realized that combining my fondness for running, maps, and cool watches in one technological device was possible and affordable, even if it did barely fit on my wrist. 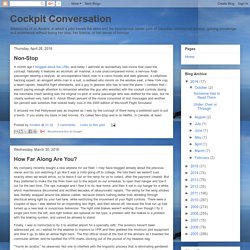 I bought a Garmin Forerunner 305. It's essentially a stopwatch integrated with a GPS, heart rate monitor, and computer, so I can know where I am, how fast I'm going, and how hard my body is working to achieve it, all at once. And then I can upload the resulting data to my laptop and stare at it in tables and graphs and maps to come to conclusions like "I get really tired when I run up mountains" and "I should run faster. " I used to come to such conclusions without the technology, but now I have data to back it up. It's ludicrous how much more fun it is to go running when you get statistics at the end. Their website is a mess of poor feature explanations. I got to the store and interrogated the clerk about the selection. Cockpit Conversation.