World-first "impossible" rotating detonation engine fires up. A Florida team working with the US Air Force claims that it's built and tested an experimental model of a rotating detonation rocket engine, which uses spinning explosions inside a ring channel to create super-efficient thrust. 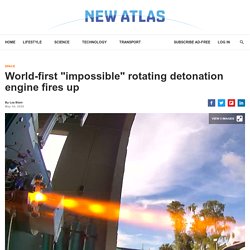 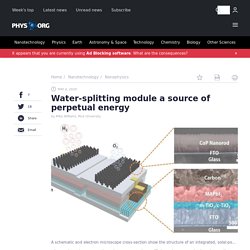 The platform developed by the Brown School of Engineering lab of Rice materials scientist Jun Lou integrates catalytic electrodes and perovskite solar cells that, when triggered by sunlight, produce electricity. The current flows to the catalysts that turn water into hydrogen and oxygen, with a sunlight-to-hydrogen efficiency as high as 6.7%. This sort of catalysis isn't new, but the lab packaged a perovskite layer and the electrodes into a single module that, when dropped into water and placed in sunlight, produces hydrogen with no further input. The platform introduced by Lou, lead author and Rice postdoctoral fellow Jia Liang and their colleagues in the American Chemical Society journal ACS Nano is a self-sustaining producer of fuel that, they say, should be simple to produce in bulk.

"The concept is broadly similar to an artificial leaf," Lou said. How Does Cogeneration Provide Heat and Power? Dear EarthTalk: What is “cogeneration” as a means of providing heat and power? 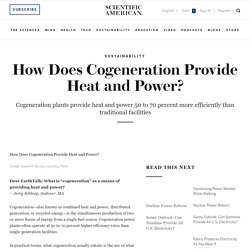 -- Jerry Schleup, Andover, MA Cogeneration—also known as combined heat and power, distributed generation, or recycled energy—is the simultaneous production of two or more forms of energy from a single fuel source. Cogeneration power plants often operate at 50 to 70 percent higher efficiency rates than single-generation facilities. In practical terms, what cogeneration usually entails is the use of what would otherwise be wasted heat (such as a manufacturing plant’s exhaust) to produce additional energy benefit, such as to provide heat or electricity for the building in which it is operating. TOP 10 Ways To Harness Wind Power – mindbodygreeen.org. Magnax prepares to manufacture radically high-powered, compact axial flux electric motor. New York City Council bill would put more wind turbines on NYC rooftops. The City Council will consider a bill Monday to standardize wind-turbine installation on rooftops as part of a suite of green legislation wending its way through the chamber. 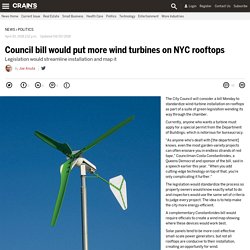 Currently, anyone who wants a turbine must apply for a special permit from the Department of Buildings, which is notorious for bureaucracy. "As anyone who's dealt with [the department] knows, even the most garden-variety projects can often ensnare you in endless strands of red tape," Councilman Costa Constantinides, a Queens Democrat and sponsor of the bill, said in a speech earlier this year. "When you add cutting-edge technology on top of that, you're only complicating it further. " article continues below advertisement The legislation would standardize the process so property owners would know exactly what to do and inspectors would use the same set of criteria to judge every project.

Pixelmator master plan. Getting Cheap Wind Power Where It’s Needed Shouldn’t Be This Hard. State regulators have blocked several big transmission projects to bring wind power to the upper Midwest and the Southeast. 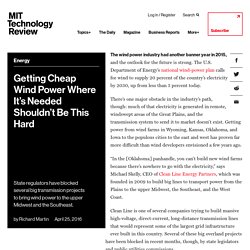 The wind power industry had another banner year in 2015, and the outlook for the future is strong. The U.S. Department of Energy’s national wind-power plan calls for wind to supply 20 percent of the country’s electricity by 2030, up from less than 5 percent today. There’s one major obstacle in the industry’s path, though: much of that electricity is generated in remote, windswept areas of the Great Plains, and the transmission system to send it to market doesn’t exist. Getting power from wind farms in Wyoming, Kansas, Oklahoma, and Iowa to the populous cities to the east and west has proven far more difficult than wind developers envisioned a few years ago. “We’re seeing single states holding up these large interstate transmission systems,” says Michael Goggin, senior director of research at the American Wind Energy Association. 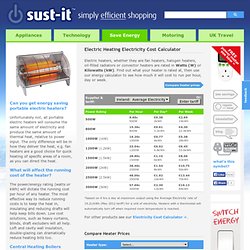 Unfortunately not, all portable electric heaters will consume the same amount of electricity and produce the same amount of thermal heat, relative to power input. The only difference will be in how they deliver the heat, e.g. fan heaters are a good choice for quick heating of specific areas of a room, as you can direct the heat. What will affect the running cost of the heater?

The power/energy rating (watts or kWh) will dictate the running cost per hour of any heater. The most effective way to reduce running costs is to keep the heat in, insulating and reducing drafts will help keep bills down. Central Heating Boilers If you are about to replace your central heating or are building a new house please visit: DEFRA (Department for Environment Food and Rural Affairs) as they maintain a Boiler Efficiency Database which allows you to view the SAP seasonal efficiency of thousands of Gas, LPG and Oil Boilers. Compare Heater Prices.