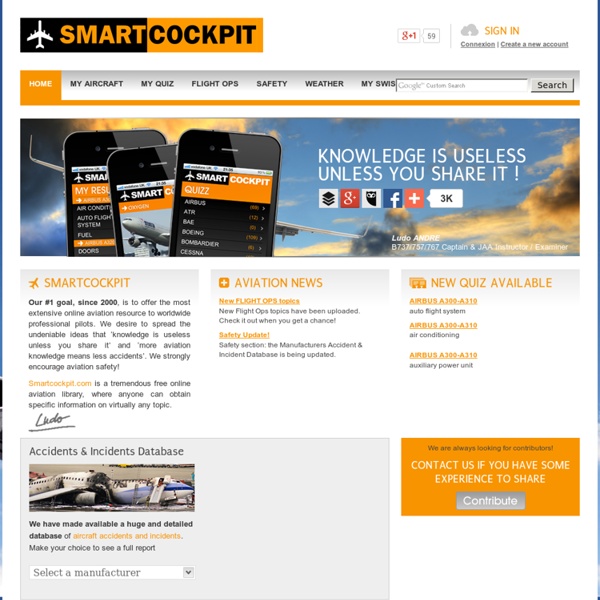 Our #1 goal, since 2000, is to offer the most extensive online aviation resource to worldwide professional pilots. We desire to spread the undeniable ideas that ‘knowledge is useless unless you share it’ and ‘more aviation knowledge means less accidents’. We strongly encourage aviation safety! Smartcockpit.com is a tremendous free online aviation library, where anyone can obtain specific information on virtually any topic.

Powered Flight Deck of the Space Shuttle Endeavour photos Purchase photos! Thank you for visiting LaunchPhotography.com and the enormous interest in the photos of the Flight Deck of the space shuttle. Be sure and contact me if you are interested in purchasing images, or for any feedback or questions. Be sure and follow me on Twitter. Classic Links Last updated on July 15, 2013 Classic Airliner Flight Simulator Sites: Looking for modern or military airliners? Here's where to get the FS jets: Here's all the info about real airliners: Groups restoring the Classic Airliners - let's support them:

Detailed Photographs of Various Aircrafts from Below Goodyear GZ-20A Blimp When traveling, it's typical to see the sides, the front, even the tail of an airplane, but it's not often that you get to see the details of a plane's underbelly. American photographer Jeffrey Milstein gives us this opportunity in his project, entitled Aircraft: The Jet as Art. R-4360Ops1 Operating the Pratt & Whitney R-4360-59B by Gerard L. Blake, August 1, 2008 The following narrative reflects some personal experiences gleaned from my somewhat fading memory and appropriate technical data of more than nine years (1961-1970) of operating R-4360-59B engines while I was employed as an instructor Flight Engineer on Boeing C-97F/G aircraft. The Engine The Pratt & Whitney R-4360-59B is a stationary radial engine of 28 cylinders arranged in 4 rows of 7 cylinders in each row.

Aircraft - Everything on Aircraft (information, latest news, articles,...) Lighter than air ? aerostats Aerostats use buoyancy to float in the air in much the same way that ships float on the water. They are characterized by one or more large gasbags or canopies, filled with a relatively low density gas such as helium, hydrogen or hot air, which is less dense than the surrounding air. When the weight of this is added to the weight of the aircraft structure, it adds up to the same weight as the air that the craft displaces. Small hot air balloons called sky lanterns date back to the 3rd century BC, and were only the second type of aircraft to fly, the first being kites.

Cockpit USA The Cockpit USA All Cotton "100 Mission" A-2 jacket is a lightweight alternative to its leather cousin created in 1979 by Cockpit USA. Crafted from tightly woven cotton twill, the jacket features snap close top and side entry pockets, epaulets, an interior chest pocket, a washable leather snap down collar and shoulder tabs along with knit cuffs and waistband. Lined with cotton which boasts a silk screened patriotic citation design, the jacket also boasts other details including a Cockpit USA I.D. leather bar tab on the left chest, a full frontal zipper under a wind flap, a hidden pen pocket under the left pocket flap and underarm ventilation grommets. How NASA brought the monstrous F-1 “moon rocket” engine back to life There has never been anything like the Saturn V, the launch vehicle that powered the United States past the Soviet Union to a series of manned lunar landings in the late 1960s and early 1970s. The rocket redefined "massive," standing 363 feet (110 meters) in height and producing a ludicrous 7.68 million pounds (34 meganewtons) of thrust from the five monstrous, kerosene-gulping Rocketdyne F-1 rocket engines that made up its first stage. At the time, the F-1 was the largest and most powerful liquid-fueled engine ever constructed; even today, its design remains unmatched (though see the sidebar, "The Soviets," for more information on engines that have rivaled the F-1).

Props, Pistons, Old Jets And the Good Ole Days of Flying Length: 74 ft 7 in (22.73 m) Wingspan: 93 ft 3 in (28.42 m) Height: 28 ft 5 in (8.66 m) Wing area: 864 ft2 (80.27 m2) Empty weight: 29,126 lb (13,211 kg) AvHistory Home Page This web site is about old airplanes and flying them. It was started as an archive of the many Dispatch magazine articles that I had written over the years and has grown as other authors have asked to have their own articles included, and given permission to do so. I have also included some aircraft images, and some original operating manuals and other information, for your enjoyment and enlightenment. Nothing posted here may be used for any commercial purposes. Please respect my own and the other authors' and photographers' copyrights. If you would like to see more original WWII documents published, please let me know.

Bugatti - REVE BLEU - the "Blue Dream" will finally fly! by Scotty Wilson Bugatti's Only Aeroplane Ettore Bugatti was a master at fusing art and technology. He built eight-thousand exquisite automobiles, but he built only one aeroplane. The Bugatti 100P - designed by Belgian engineer Louis de Monge - was an art-deco classic and the most technologically-advanced airplane of its time. The Elegant Solution to Flying Very Fast! The innovative Bugatti 100P was a giant leap forward in the late 1930s, featuring advanced systems and cutting-edge aerodynamics.