USA - XCSoar Loading Files & Proving Grounds Tasks. - Daniel Sorenson is on ayvri.com, - Sailplane. Crash Landing in a Russia Sailplane at the Marana Ultralight Strip. Glider Crash Landing: Instructor Reacts! Gliding Over Uinta Mountains - with loops for the hikers. (58) 2020 WVSC Safety Stand-Up. Tucson Soaring Club. Does Soaring Have To Be So Dangerous? - Soaring - Chess in the Air.

My last post titled “The Risk of Dying Doing What We Love” presented the results of a statistical analysis where I compared the risk of flying sailplanes to other things we love to do such as cycling, horse back riding, paragliding, etc. 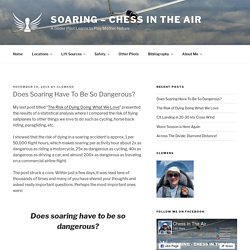 I showed that the risk of dying in a soaring accident is approx. 1 per 50,000 flight hours, which makes soaring per activity hour about 2x as dangerous as riding a motorcycle, 25x as dangerous as cycling, 40x as dangerous as driving a car, and almost 200x as dangerous as traveling on a commercial airline flight. The post struck a core. Within just a few days, it was read tens of thousands of times and many of you have shared your thoughts and asked really important questions.

Perhaps the most important ones were: To answer these question I read, interpreted, and analyzed about 250 glider accident reports. B) By type of operation. 6% of accidents occur during competition, 22% during flight training, and 72% during pleasure flights. c) By Safety Risk. Rattlesden Gliding Club. Current Issue - Sailplane & Gliding. Team GB brought home an impressive haul of international medals this summer. 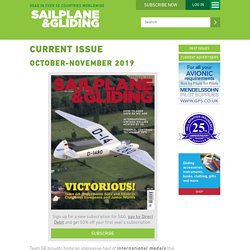 Read about our champions in the Oct/Nov issue of S&G, where you can also find out how to improve your thermal centring techniques (to become the next world champion?). The VGC held its International Rally and Rendezvous in the UK – see the report and stunning photographs. If you are feeling vintage yourself, don’t miss the valuable advice on keeping safe as we age. It was a summer of success with the UK winning Club Class Gold and Silver medals in the Europeans and the Junior Worlds. These followed the earlier Silver medals won by Steve Jones and Garry Coppin in the 20m Class in Hungary. If you want to improve your thermal centring techniques to world class standards, or just to improve your cross-country flying, there’s another useful article from the Aim Higher team.

Condor Soaring – The Complete Soaring Simulator. Hawaii Glider and Sailplane Academy. Dynamic Soaring - On Board Video. DYNAMIC SOARING NEW WORLD RECORD: Bruce Tebo flies 505mph at Weldon with his Kinetic 130. Las Vegas Valley Soaring Association. About Us. A brief history of the club Founded in 1953 as the Coventry Gliding Club flying at Baginton, two pieces of the old wartine airfield at Husbands Bosworth were bought at auction in 1963. 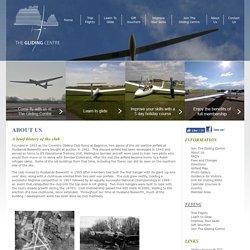 This disused airfield had been developed in 1943 and served as home to 85 Operational Training Unit. Wellington bomber aircraft were used to train new pilots who would then move on to serve with Bomber Command. After the war, the airfield became home to a Polish refugee camp. Some of the old buildings from that time, including the Tower, can still be seen on the southern side of the site. The club moved to Husbands Bosworth in 1965 after members had built the first hangar with its giant 'up and over' door, along with a clubhouse erected from two post war prefabs. One of our senior members, Keith Nurcombe has provided a more in-depth history of The Gliding Centre here. Our facilities The airfield We enjoy hosting regional and national gliding competitions throughout the year. The fleet Flying Training. Morning glory brings gliders from far and wide to surf spectacular, rare cloud formation. 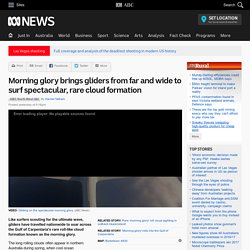 Geoff Pratt, from Cairns, has been making the annual pilgrimage to Burketown for the Morning Glory Festival for the last 20 years, and said it was always worth the effort. Electric Flap motor or mechanism for flap cables - Backcountry Pilot. Firgelli OS Series 200lbs, 6" Stroke Feedback Linear Actuator. Dynamic Force: 200 lbsStroke: 6''Voltage: 12VSpeed: .30"/sComes with a built-in optical sensor and limit switchesProvides feedback when you need itCan be input to an external controller such as an Arduino When you need to know exact positioning of your actuators, the Firgelli OS Series 200lbs, 6" Stroke Feedback Linear Actuator is what you need. 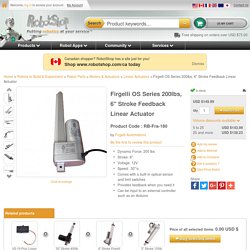 This powerful, reliable actuator comes with a built-in optical sensor that provides feedback when you need it. It has no built-in controller, but do provides single phase pulses as position feedback signal that can be input to an external controller such as Arduino. Linear actuator for flaps - www.express-builder.com. Compact Actuator LA14. The actuator LA14 is a very tough actuator with a high IP degree and aluminium housing, making it ideal for use in harsh and demanding environments. 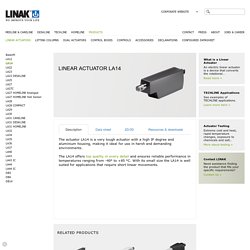 The LA14 offers top quality in every detail and ensures reliable performance in temperatures ranging from -40° to +85 °C. With its small size the LA14 is well suited for applications that require short linear movements. Linear actuator LA14 View the data sheet as an online magazine or download the PDF. 2D drawing 3D models are available in the below formats: LA14 user manual Experience the new world of intelligent actuators. Online Magazine | PDF These connection diagrams give you an easy overview of how to quickly install your LINAK LA14 actuator. Comparing Linear Servos & Linear Actuators - with Kyle and Jason. RV-3: Electric Flap Actuator - VAF Forums. Although the stock RV-3 design has simple and effective manual flaps, we wanted to do something different with the interior that wouldn’t really leave room for the flap handle. 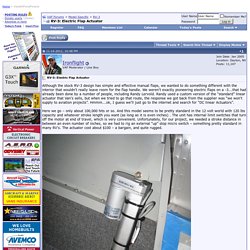 We weren’t exactly pioneering electric flaps on a -3….that had already been done by a number of people, including Randy Lervold. Randy used a custom version of the “standard” linear actuator that Van’s sells, but when we tried to go that route, the response we got back from the supplier was “we won’t supply to aviation projects”. Hmmm….ok, I guess we’ll just go to the internet and search for “DC linear Actuators”. Here we go – only about 100,000 hits or so. And this model seems to be pretty standard in the 12 volt world with 120 lbs capacity and whatever stroke length you want (as long as it is even inches) . L16 Linear Actuator, 140mm, 35:1, 12V w/ Potentiometer Feedback. • Gear ratio: 35:1• Stroke: 140mm• Max Speed (no load): 32mm/s• Input voltage: 0-15 VDC, Rated at 12VDC• Stall current: 650mA @ 12V• Comes with Potentiometer Feedback Actuonix introduces the L16 Linear Actuator, 140mm, 35:1, 12V w/ Potentiometer Feedback. 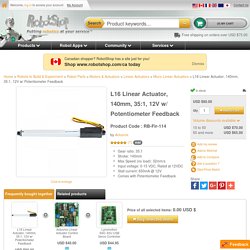 Actuonix's unique line of Miniature Linear Actuators enables a new generation of motion-enabled product designs, with capabilities that have never before been combined in a device of this size. These linear actuators are a superior alternative to designing your own push/pull mechanisms. The L16 actuators are complete, self contained linear motion devices with position feedback for sophisticated position control capabilities. High Desert Soaring. How birds soar to great heights: Mathematical models offer clues to greater efficiency for glider pilots. Migratory birds often use warm, rising atmospheric currents to gain height with little energy expenditure when flying over long distances. 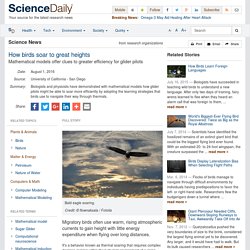 It's a behavior known as thermal soaring that requires complex decision-making within the turbulent environment of a rising column of warm air from the sun baked surface of the earth. But exactly how birds navigate within this ever-changing environment to optimize their thermal soaring was unknown until a team of physicists and biologists at the University of California San Diego took an exacting computational look at the problem. In this week's online version of the journal Proceedings of the National Academy of Sciences, the scientists demonstrated with mathematical models how glider pilots might be able to soar more efficiently by adopting the learning strategies that birds use to navigate their way through thermals. Untitled Document. Riders On The Storm... AC4-A Russia Sailplane. SILVERADO SOARING CLUB. Glider Rides, Pilot Training, Flying Lessons, Napa, Sonoma, Clearlake.