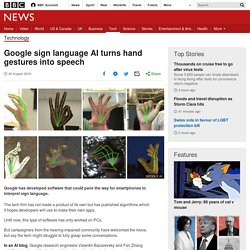 The tech firm has not made a product of its own but has published algorithms which it hopes developers will use to make their own apps. Until now, this type of software has only worked on PCs. But campaigners from the hearing-impaired community have welcomed the move, but say the tech might struggle to fully grasp some conversations. THINKING WITH HANDS (36 min) Studying Ballet Dancers Could Help Us Treat Stroke Victims—and Build Better Robots. Dagmar Sternad is a professor of biology, physics, and electrical and computer engineering at Northeastern University. 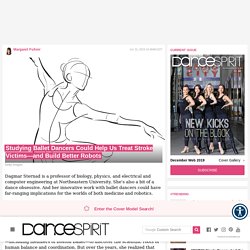 She's also a bit of a dance obsessive. And her innovative work with ballet dancers could have far-ranging implications for the worlds of both medicine and robotics. A longtime dance lover, Sternad has been been fascinated by the science behind dancers' movements for years. "How do we control our limbs...and how does our brain control our body? " Midway in May: Lake Studios Artist Residency. Over the past two weeks I have been in residence at Lake Studios Berlin focusing on improvisation in rehearsals and performances, mostly with saxophonist/improviser/composer Ross Feller, the other half of a long collaboration via Double-Edge Dance. 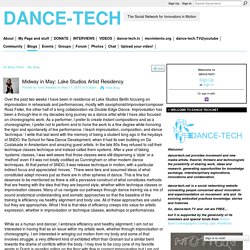 Improvisation has been a through-line in my decades long journey as a dance artist while I have also focused on choreographic work. As a performer, I prefer to create instant compositions and as a choreographer, I prefer not to perform and to hone the work to a fine degree while honoring the rigor and spontaneity of live performance. I teach improvisation, composition, and dance ‘technique.’ I write that last word with the memory of being a student long ago in the heydays of SNDO, the School for New Dance Development, when it had its own building on Da Costakade in Amsterdam and amazing guest artists.

In the late 80s they refused to call their technique classes technique and instead called them systems. Motion and Representation. Gestures Catalog. Understanding the future of gestural interaction In Science Fiction (Sci-Fi) movies, filmmakers try to anticipate trends and new forms of interaction. 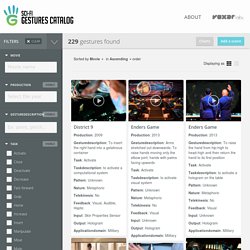 Metaphors are created allowing their characters to interact with futuristic devices and environments. These devices and metaphors should be target of research considering they have proven to be useful before. Moreover, the impact of the new interfaces on the audience may indicate their expectations regarding future gesture interactions. This little gem from Kurt Koegel (issue... - Contact Quarterly. CCTV Documentary (Director's cut) Kung Fu Motion Visualization. Kung Fu Motion Visualization. Embodiment: interdisciplinary themes and perspectives for digital technology research. The emergence of embodiment as a research area Renewed interest in theories and perspectives of embodiment has emerged in conjunction with advances in ubiquitous computing and the development of technologies that inherently change the character of human computer interaction. 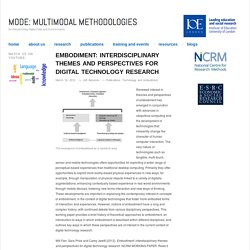 The very nature of technologies such as tangible, multi-touch, sensor and mobile technologies offers opportunities for exploiting a wider range of perceptual-based experiences than traditional desktop computing. Primarily they offer opportunities to exploit more bodily-based physical experiences in new ways, for example, through manipulation of physical objects linked to a variety of digitally augmentations; enhancing contextually based experience in real world environments through mobile devices, fostering new forms interaction and new ways of thinking. Computers can tell if you're bored, shows new study. Technology could lead to 'empathetic' robots and reactive on-line learning programmes. 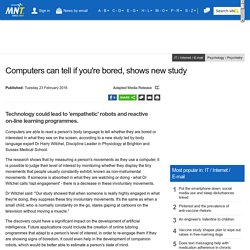 Computers are able to read a person's body language to tell whether they are bored or interested in what they see on the screen, according to a new study led by body language expert Dr Harry Witchel, Discipline Leader in Physiology at Brighton and Sussex Medical School. The research shows that by measuring a person's movements as they use a computer, it is possible to judge their level of interest by monitoring whether they display the tiny movements that people usually constantly exhibit, known as non-instrumental movements. Non-Instrumental Movement Inhibition (NIMI) Differentially Suppresses Head and Thigh Movements during Screenic Engagement: Dependence on Interaction. Neuroplasticity: think on purpose and change your brain. “The brain is neuroplastic,” says world renowned cognitive neuroscientist, Dr. 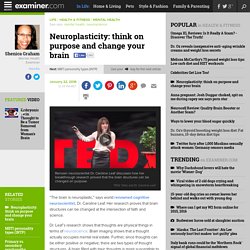 Caroline Leaf. Her research proves that brain structures can be changed at the intersection of faith and science. Dr. Leaf’s research shows that thoughts are physical things in terms of neuroscience. Brain imaging shows that a thought actually occupies mental real estate. Dr. A toxic thought literally equates to brain damage because the brain is not wired to naturally accept negativity. In order to even host a toxic thought, the brain – which is naturally wired for thoughts that extend from love, must translate toxic thoughts into some representation that it can understand. Toxic thoughts create disorder in the brain because the natural brain language of love and life is violated.

Expanding Dr. Dr. In fact, Dr. When Dr. What Educators and Parents Should Know About Neuroplasticity, Learning and Dance. — The Dance for Athletes class at Glen Burnie High School performs a swing piece Dance. 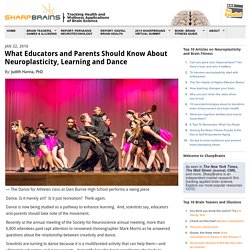 Is it merely art? Is it just recreation? Think again. Dance is now being studied as a pathway to enhance learning. Recently at the annual meeting of the Society for Neuroscience annual meeting, more than 6,800 attendees paid rapt attention to renowned choreographer Mark Morris as he answered questions about the relationship between creativity and dance. Scientists are turning to dance because it is a multifaceted activity that can help them—and ultimately educators and even parents– demystify how the brain coordinates the body to perform complex, precise movements that express emotion and convey meaning. The brain hides from our sight the wondrously complex operations that underlie this feat.

More than 400 studies related to interdisciplinary neuroscience reveal the hidden value of dance. Dance is a language of physical exercise that sparks new brain cells (neurogenesis) and their connections. The Geek Movement » UIST 2009 SIC: Laban Gestures for Expressive Keyboarding. On October 5th, we participated in the Student Innovation Contest at the 2009 User Interface Software and Technology conference (UIST) in Victoria, BC. 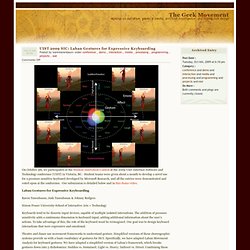 Student teams were given about a month to develop a novel use for a pressure sensitive keyboard developed by Microsoft Research, and all the entries were demonstrated and voted upon at the conference. Laban 1926 Choreographie Analysis of Movement. Within the Kinesphere. In the last set of articles I discussed and summarized Ed Hooks’ indispensable book Acting for Animators. 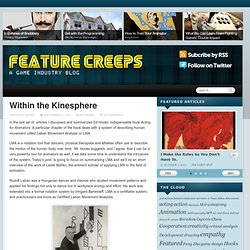 A particular chapter of the book deals with a system of describing human movement called Laban Movement Analysis or LMA. Laban Analysis Reviews. The concept of a direction requires an origin from which the direction is judged, this origin is often conceived to be a center of the kinesphere (movement space). Rudolf Laban's choreutics frequently uses a full-body sized kinesphere surrounding the person, with directions judged from an an egocentric reference system with center conceived to be the center of the body. This creates a global system where the directional orientation of the entire body is considered as a whole. Sometimes Rudolf Laban explicitly specified that "the direction c [center] is always in the body center" (Laban, 1963, p. 93) and others reaffirm that "Laban placed ‘centre’ at the body’s centre, which is approximately at the navel.

Emptied Gestures: Physical Movement Translated into Symmetrical Charcoal Drawings by Heather Hansen. Photo by Bryan Tarnowski Photo by Spencer Hansen at Ochi Gallery Splayed across a giant paper canvas with pieces of charcoal firmly grasped in each hand, Heather Hansen begins a grueling physical routine atop a sizeable paper canvas. Her body contorts into carefully choreographed gestures as her writing implements grate across the floor, the long trails resulting in a permanent recording of her physical movements. Gestures and Tools for Kinect - Eternal Coding - HTML5 / Windows / Kinect / 3D development.

You have certainly not missed (as a regular reader of this blog ) that the Kinect for Windows SDK is out! For now, however, no gestures recognition services are available. So throughout this paper we will create our own library that will automatically detect simple movements such as swipe but also movements more complex such as drawing a circle with your hand. Tag Archive for "gesture" Cinematics case study: Mass Effect 3. Earlier this year, Budapest studio Digic Pictures produced a stunning three minute trailer for the Bioware game Mass Effect 3. The trailer, dubbed 'Take Earth Back', tells the story of an alien invasion as Earth is attacked by the game's Reapers. Projects - Philomène Longpré.