Better Off Dead. Join us as Andrew Denton investigates the stories, moral arguments and individuals woven into discussions about why good people are dying bad deaths in Australia – because there is no law to help them. 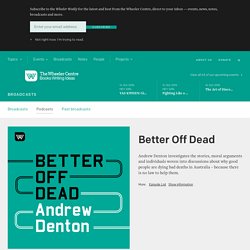 Want to stay updated about this podcast, as well as other special projects from the Wheeler Centre? Subscribe to the Wheeler Weekly newsletter. #betteroffdeadpod Your stories If you're suffering, or someone you love has died badly – in a hospital, in palliative care, in a nursing home, or at home – add your voice and tell your story here. Ahead of the release of Better Off Dead – and since his Di Gribble Argument in October – Andrew Denton has spoken, written and debated the issue in the media. Discuss the series All messages as part of this discussion and any opinions, advice, statements, or other information contained in any messages or transmitted by any third party are the responsibility of the author of that message and not the Wheeler Centre. A lesson in the power of words (and censorship) - The Drum. Opinion Posted Words like "spastic" and "gay" are bandied around the playground every day, but when my son wanted to speak thoughtfully about the harm they can do, he wasn't allowed, writes Elizabeth Jackson. 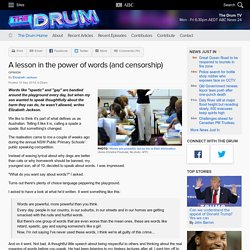 We like to think it's part of what defines us as Australian. Telling it like it is, calling a spade a spade. But something's changed. The realisation came to me a couple of weeks ago during the annual NSW Public Primary Schools' public speaking competition. Instead of waxing lyrical about why dogs are better than cats or why homework should be banned, my youngest son, all of 10, decided to speak about words.

"What do you want say about words? " Turns out there's plenty of choice language peppering the playground. I asked to have a look at what he'd written. St Kilda recruit Jake Carlisle apologises for video appearing to show him snorting white powder. Updated New St Kilda recruit Jake Carlisle has apologised for a social media video that shows him appearing to snort a line of white powder. 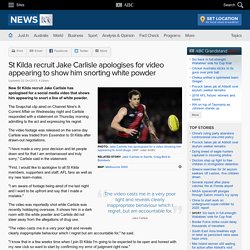 The Snapchat clip aired on Channel Nine's A Current Affair on Wednesday night and Carlisle responded with a statement on Thursday morning admitting to the act and expressing his regret. The video footage was released on the same day Carlisle was traded from Essendon to St Kilda after drawn-out negotiations. "I have made a very poor decision and let people down and for that I am embarrassed and truly sorry," Carlisle said in the statement. "First, I would like to apologise to all St Kilda members, supporters and staff, AFL fans as well as my new team-mates. The video casts me in a very poor light and reveals clearly inappropriate behaviour which I regret, but am accountable for.

"I am aware of footage being aired of me last night and I want to be upfront and say that I made a mistake. " "He's not getting caught up in the images, grainy or otherwise. Drugs and footballers: the spotlight shines on us all. It's pitiful that footage like Jake Carlisle's should be worth anything at auction. 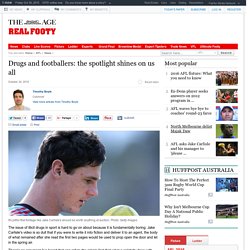 Photo: Getty Images The issue of illicit drugs in sport is hard to go on about because it is fundamentally boring. Jake Carlisle's video is so dull that if you were to write it into fiction and deliver it to an agent, the body of what remained after she read the first two pages would be used to prop open the door and let in the spring air. There's no argument I've heard that can refute the simple fact that what a celebrity does with himself in private is of interest to the soft and temporary aspects of our attention. And while Carlisle did broadcast his private moment, it wasn't with the intention that it be dispersed for our judgment, or the judgment of a football club that wants to borrow his talent on the field.

I see why this story is interesting to Saints people, who want know about their investment and have found out, if nothing else, that he's not overly concerned with appearances. Jake Carlisle the centre of drug scandal. AFL footballer Jake Carlisle has been thrust into the centre of yet another potential Aussie Rules drug scandal, with Channel Nine's A Current Affair claiming that the 24-year-old allegedly sent a video of himself snorting a white powder to contacts on Snapchat. 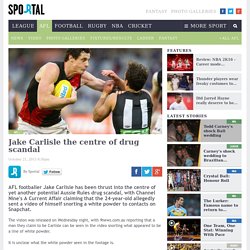 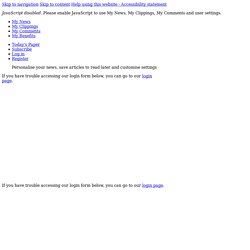 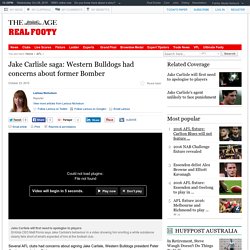 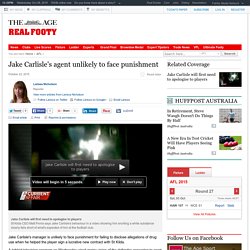