A Very Short History Of Data Science. The story of how data scientists became sexy is mostly the story of the coupling of the mature discipline of statistics with a very young one–computer science. 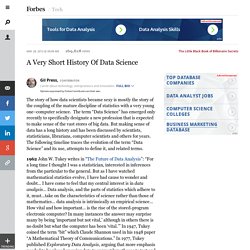 The term “Data Science” has emerged only recently to specifically designate a new profession that is expected to make sense of the vast stores of big data. But making sense of data has a long history and has been discussed by scientists, statisticians, librarians, computer scientists and others for years. The following timeline traces the evolution of the term “Data Science” and its use, attempts to define it, and related terms. 1962 John W. Tukey writes in “The Future of Data Analysis”: “For a long time I thought I was a statistician, interested in inferences from the particular to the general. 1974 Peter Naur publishes Concise Survey of Computer Methods in Sweden and the United States. 1977 The International Association for Statistical Computing (IASC) is established as a Section of the ISI. 2001 William S.

May 2005 Thomas H. The data science ecosystem – Medium. Today this ecosystem exists only in a small number of large multinational IT companies and in some data-intensive sciences with large experimental projects. 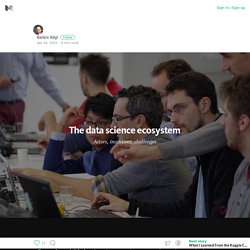 In scientific domains with smaller experiments and in smaller companies with a primary focus other than data, challenges related to developing and managing the data science ecosystem come in all shapes and sizes. That said, we can identify and describe some of the typical challenges, generalizable across multiple domains. Manpower To a large extent, the major bottleneck is the lack of manpower.

We have arguably enough domain scientists and software engineers, but there is a major mismatch between supply and demand in any of the remaining four roles related to data. Incentives Most data scientists, as other scientists, are trained and incentivized to do research on highly specialized domains. Finally, none of the researchers have interest in taking on the crucial data trainer role. Access Tools.

A Tour of Machine Learning Algorithms. In this post, we take a tour of the most popular machine learning algorithms. 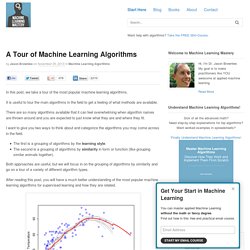 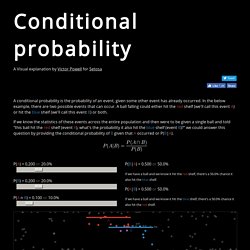 In the below example, there are two possible events that can occur. A ball falling could either hit the red shelf (we'll call this event A) or hit the blue shelf (we'll call this event B) or both. Markov Chains explained visually. Explained Visually By Victor Powell with text by Lewis Lehe Markov chains, named after Andrey Markov, are mathematical systems that hop from one "state" (a situation or set of values) to another. 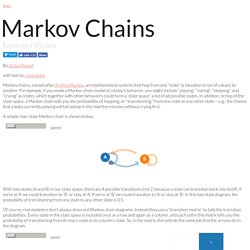 For example, if you made a Markov chain model of a baby's behavior, you might include "playing," "eating", "sleeping," and "crying" as states, which together with other behaviors could form a 'state space': a list of all possible states. In addition, on top of the state space, a Markov chain tells you the probabilitiy of hopping, or "transitioning," from one state to any other state---e.g., the chance that a baby currently playing will fall asleep in the next five minutes without crying first.

A simple, two-state Markov chain is shown below. With two states (A and B) in our state space, there are 4 possible transitions (not 2, because a state can transition back into itself). Of course, real modelers don't always draw out Markov chain diagrams. A 'Brief' History of Neural Nets and Deep Learning, Part 4 – Andrey Kurenkov's Web World.

This is the fourth part in ‘A Brief History of Neural Nets and Deep Learning’. 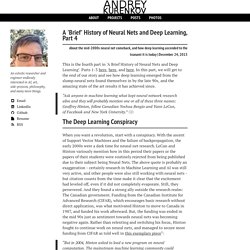 Parts 1-3 here, here, and here. In this part, we will get to the end of our story and see how deep learning emerged from the slump neural nets found themselves in by the late 90s, and the amazing state of the art results it has achieved since. “Ask anyone in machine learning what kept neural network research alive and they will probably mention one or all of these three names: Geoffrey Hinton, fellow Canadian Yoshua Bengio and Yann LeCun, of Facebook and New York University.” When you want a revolution, start with a conspiracy. With the ascent of Support Vector Machines and the failure of backpropagation, the early 2000s were a dark time for neural net research.

“But in 2004, Hinton asked to lead a new program on neural computation. “It was the worst possible time,” says Bengio, a professor at the Université de Montréal and co-director of the CIFAR program since it was renewed last year. . . . In 2012. .