Dr. Lynne Jones has worked extensively with refugees in Greece, Europe and France. She continues to stay in touch with a number of the youth she met and follows news reports on issues relating to migrants and refugees.

Migrant children’s welfare is being sidelined in UK’s ‘brutal push to deport’ Taking Hard Line, Greece Turns Back Migrants by Abandoning Them at Sea. RHODES, Greece — The Greek government has secretly expelled more than 1,000 refugees from Europe’s borders in recent months, sailing many of them to the edge of Greek territorial waters and then abandoning them in inflatable and sometimes overburdened life rafts. 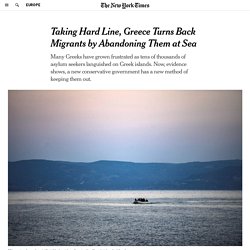 Since March, at least 1,072 asylum seekers have been dropped at sea by Greek officials in at least 31 separate expulsions, according to an analysis of evidence by The New York Times from three independent watchdogs, two academic researchers and the Turkish Coast Guard. The Times interviewed survivors from five of those episodes and reviewed photographic or video evidence from all 31. “It was very inhumane,” said Najma al-Khatib, a 50-year-old Syrian teacher, who says masked Greek officials took her and 22 others, including two babies, under cover of darkness from a detention center on the island of Rhodes on July 26 and abandoned them in a rudderless, motorless life raft before they were rescued by the Turkish Coast Guard.

Lynne Myfanwy Jones Oct 29 “A man drowned after trying to use a rucksack filled with empty plastic bottles as a makeshift lifejacket. One baby died after being born prematurely to an Iraqi Kurdish woman” Just two more heartbreaking stories. It does not have to be this way. – iearn

The Institute of Race Relations research, due to be published next month and seen by the Guardian, details the cases of 292 people who have died trying to cross by vehicle, tunnel and over the water since 1999. 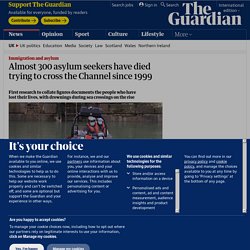 It includes Tuesday’s four deaths, when an Iranian Kurdish couple and two of their children died when their boat sank. Maël Galisson from Gisti, a legal service for asylum seekers in France, has worked on the report, published in partnership with the Permanent People’s Tribunal London steering group, and has been documenting these deaths for two decades. Giving the Migrant Child a Voice. Dr Lynne Jones OBE: Giving the Migrant Child a Voice. ‘Wash Our Hands? Some People Can’t Wash Their Kids for a Week.’ MAARAT MISRIN, Syria — In northwestern Syria, where a million people who have fled the civil war are sheltering in muddy tent camps and abandoned buildings, the spread of the coronavirus could wreak untold disaster on a devastated region. 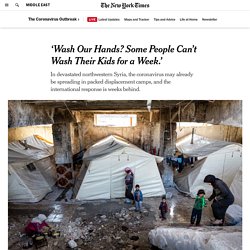 Forget hand washing and social distancing, the preventive measures recommended by health authorities around the world. Refugees don't have the luxury of social distancing. We've partnered with data journalist Mona Chalabi to compare the population density of refugee camps with the Diamond Princess cruise ship, where COVID-19 spread 4x faster than in Wuhan at the peak of t. NGOs raise alarm as coronavirus strips support from EU refugees. Governments across Europe are facing calls to urgently put into place measures to protect refugees and migrants – in particular lone children – as the coronavirus epidemic sees volunteer numbers plunge and many vital support services close. 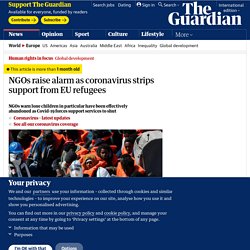 Hopes for a post COVID19 world - Dr. Lynne Jones. How COVID-19 halted NGO migrant rescues in the Mediterranean. Social distancing measures and travel restrictions are intended to slow the spread of COVID-19 and save lives. 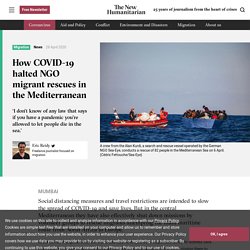 But in the central Mediterranean they have also effectively shut down missions by volunteer groups to rescue migrants attempting the main maritime route from North Africa to Europe. At the same time, governments in Malta and Italy have ignored or responded slowly to distress calls from people stranded at sea and declared their ports unsafe because of the virus, closing them to the few NGO rescue boats that had – until recently at least – still been managing to operate. As a result, a deadly rescue gap has been created, according to Miriam Edding, a volunteer with Alarm Phone, an emergency hotline that supports rescue efforts in the Mediterranean. “What we are seeing now is a really dangerous escalation of tendencies we have seen before,” Edding told The New Humanitarian. An evasion of responsibility Assisting people in distress at sea is required by international maritime law.

‘We Are Like Animals’: Inside Greece’s Secret Site for Migrants. POROS, Greece — The Greek government is detaining migrants incommunicado at a secret extrajudicial location before expelling them to Turkey without due process, one of several hard-line measures taken to seal the borders to Europe that experts say violate international law. 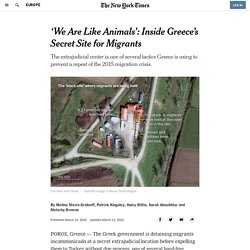 Several migrants said in interviews that they had been captured, stripped of their belongings, beaten and expelled from Greece without being given a chance to claim asylum or speak to a lawyer, in an illegal process known as refoulement. Meanwhile, Turkish officials said that at least three migrants had been shot and killed while trying to enter Greece in the past two weeks. The Greek approach is the starkest example of European efforts to prevent a reprise of the 2015 migration crisis in which more than 850,000 undocumented people passed relatively easily through Greece to other parts of Europe, roiling the Continent’s politics and fueling the rise of the far right. Mr. Mr. Mr. Corona virus migrants.

British Airways: Stop assisting the UK Home Office with unjust deportations. - The Washington Post. First Child Detained by Trump Reportedly dies due to ‘Possible Negligence' UNHCR - UK: 'School of Sanctuary' opens its doors to refugee children. Migrant kids are being traumatized, not treated for mental health needs. Held down, injected, drugged – this is how immigrant children in need of mental health support, but detained in government facilities, are being treated, according to a lawsuit filed in a California court in April. 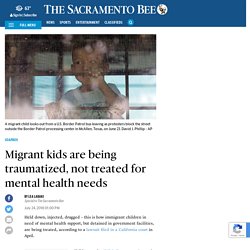 Children at the Shiloh Treatment Center in Manvel, Texas, were allegedly prescribed as many as 10 different shots and pills at a time and told they would never leave the center if they refused to take the medication. One plaintiff declared that staff members at Shiloh provoked the children to make then angry and justify giving them injections.

Another complaint, filed on behalf of five immigrant children in U.S. District Court in Los Angeles in June, alleges that the policies of the Office of Refugee Resettlement are causing grave harm to children. How the Humanitarian Crisis on the Mexico Border Could Worsen. ‘Fraternité’ Brings Immunity for Migrant Advocate in France. UN - Refugees and Migrants. Cleaning Toilets, Following Rules: A Migrant Child’s Days in Detention. Esmeralda Bermudez □ sur Twitter : "Tonight, Guatemalan asylum seeker Hermelindo Che Coc was reunited w/ his 6-yr-old son, Jefferson at LAX. The two were separated at the border, didn’t see each other nearly 2 months. The boy had a vacant look in his eyes.

UN Refugee Agency (Refugees) This little boy died in the Evros river between Turkey and Greece… Ethiopian migrant brings the Italian hills alive with the sound of goats. Texas Judge: "I can’t understand this. If someone at the jail takes your wallet, they give you a receipt. They take your kids, and you get nothing? Not even a slip of paper?" Incarcerating Entire Families Cannot Be the Solution to the Separation of Children. Splinter - Where did the concept of "illegal immigration"... An emergency physician describes her experience with three traumatized immigrant toddlers seized from their parents. Lynne Myfanwy Jones sur Twitter : "My Memoir: Outside the Asylum, is published in paperback today! 'A passionate account... of human suffering and the human response (that is) both broad and wise' according to Emma Williams of the Spectator.…