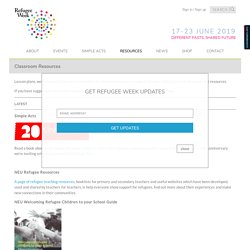 Click hyperlinks to access the resources. If you have suggestions for further resources that should be included in this section, do let us know. Latest Simple Acts. Teaching Immigration Empathy. It’s summer vacation which means that most of the Secondary ELA groups I am in on social media are full of teachers asking for recommendations for books to add to their curricula. 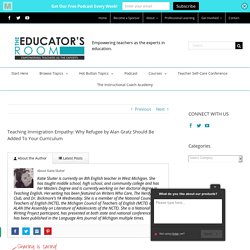 UNHCR - Teaching about refugees. With forced displacement reaching historic levels, schools all over the world are welcoming increasing numbers of refugee children. 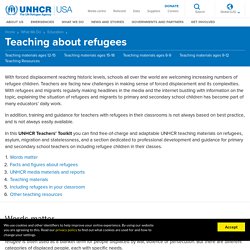 Amnesty Int'l: A Time to Flee Activity. The Backpack Refugee Assignment. Community Support for Syrian Refugees. Common Core Standard: CCSS.ELA-LITERACY.RI.9-10.3: Analyze how the author unfolds an analysis or series of ideas or events, including the order in which the points are made, how they are introduced and developed, and the connections that are drawn between them. 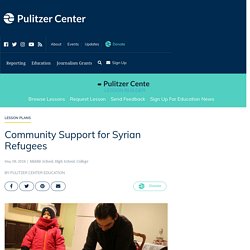 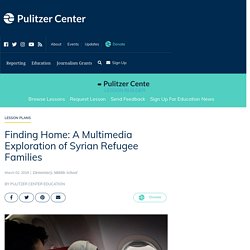 Forced to Flee / Forcés de Partir - Canadian Foodgrains Bank. In this activity students work together in “family units”, making difficult decisions to maintain their supply of food, money, and health while securing their future post-conflict. 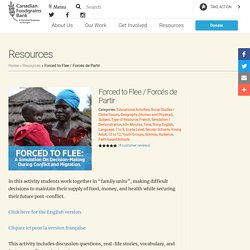 Click here for the English version. Cliquez ici pour la version française. This activity includes discussion questions, real-life stories, vocabulary, and facts on conflict and migration. Refugee Discussion Guide (Scholastic) About Refugee Three young people are looking for refuge, a place for themselves and their families to live in peace. 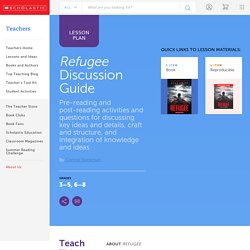 Separated by decades in time and by oceans in geography, their stories share similar emotional traumas and desperate situations. . . . and, at the end, connect in astounding ways. Josef in 1930s Nazi Germany, Isabel in 1990s Cuba, and Mahmoud in present-day Syria — all three hang on to their hope for a new tomorrow in the face of harrowing dangers. About the Author Alan Gratz is the acclaimed author of several books for young readers, including Prisoner B-3087, which was named to YALSA’s Best Fiction for Young Adults list; Code of Honor, a YALSA Quick Pick; and Projekt 1065; a Kirkus Best Book of the Year. Pre-Reading Activity. Refugee HyperDoc - Google Slides. Syrian Journey: Choose your own escape route. Time Explorer: The Holocaust.

The Holocaust, also referred to as the Shoah, was a genocide during World War II in which Nazi Germany, aided by its collaborators, systematically murdered approximately 6 million European Jews, around two-thirds of the Jewish population of Europe, between 1941 and 1945. 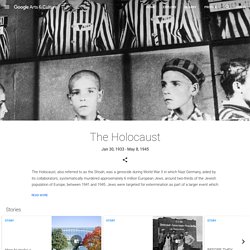 Jews were targeted for extermination as part of a larger event which involved the persecution and murder of other groups by the regime, including in particular the Roma, and "incurably sick", as well as homosexuals, political opponents, Jehovah's Witnesses, Soviet prisoners of war, and Slavs.Germany implemented the persecution in stages.

Following Adolf Hitler's rise to power in 1933, the government passed laws to exclude Jews from civil society, most prominently the Nuremberg Laws in 1935. Starting in 1933, the Nazis built a network of concentration camps in Germany for political opponents and people deemed "undesirable". What Is Home? Objectives: Students will be able to: Analyze text and images in order to synthesize information and reflect on the question: What is home? 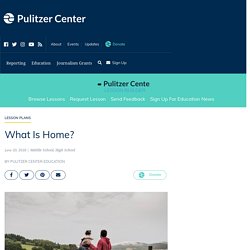 Compare and contrast their ideas of home with the “home” portrayed in the media, Finding Home.Evaluate and revise their ideas and connections to this topic by discussing the details in the text and images. Note: This lesson plan was created during United Photo Industries’ Fall 2017 Teacher PD Day, a program that brings teachers and artists together to develop lesson plans inspired by Photoville exhibitions. Refugee Audiobook on Epic!

Podcast: Telling the Stories of Refugees. Actors Mandy Patinkin and Kathryn Grody, and author Alan Gratz join us this week to talk about the refugee crisis, and how they are giving voice to the children affected. 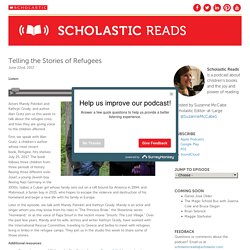 First, we speak with Alan Gratz, a children's author whose most recent book, Refugee, hits shelves July 25, 2017. The book follows three children from three periods of history fleeing three different evils: Josef, a young Jewish boy fleeing Nazi Germany in the 1930s; Isabel, a Cuban girl whose family sets out on a raft bound for America in 1994; and Mahmoud, a Syrian boy in 2015, who hopes to escape the violence and destruction of his homeland and begin a new life with his family in Europe. Later in the episode, we talk with Mandy Patinkin and Kathryn Grody. Mandy is an actor and singer whom you may know from his roles in "The Princess Bride," the Showtime series "Homeland," or as the voice of Papa Smurf in the recent movie "Smurfs: The Lost Village.

" Additional resources: Podcast: Yusra Mardini by Good Night Stories for Rebel Girls. 9 questions about the global refugee crisis you were too embarrassed to ask. “We don’t want them here,” President Donald Trump said on January 27, just before he signed his controversial executive order on immigrants and refugees. “We want to make sure we are not admitting into our country the very threats our soldiers are fighting overseas.” Thus launched the refugee ban that would be among the first controversies of the Trump administration. As written, that first executive order banned immigrants and visa holders from seven Muslim-majority countries — Iran, Iraq, Syria, Yemen, Libya, Sudan, and Somalia — from entering the US for 90 days. It also was a stop sign for all refugee admissions to the United States for 120 days, barred Syrian refugees indefinitely, and prioritized Christian refugees and other religious minorities.

Federal judges ultimately denied Trump’s mission to halt the program, but the US acceptance rate of refugees nevertheless dipped precipitously for many months. Articles to go with Refugee. Alan Gratz Website. Three different kids. One mission in common: ESCAPE. Josef is a Jewish boy in 1930s Nazi Germany. The Boat.

Cuban Exile Experience. Eighty Years After Kristallnacht. The next month, Hitler got his pretext. A young Polish Jewish exile, whose family had first been impoverished then rendered stateless by Nazi policies, struck back by assassinating a German diplomat in Paris on the night of November 7, 1938. The Nazi leadership seized on the killing as proof of a global Jewish plot against Germany. Brownshirts were ordered to attack Jewish lives and property—and police were ordered to stand aside. Forced to Flee - Make a choice flowchart. From ghetto in Theresienstadt to Auschwitz II-Birkenau. The story of U.S. immigrants in their own words.

Brian Bilston's Poetry Laboetry. They have no need of our help So do not tell me These haggard faces could belong to you or me Should life have dealt a different hand We need to see them for who they really are Chancers and scroungers Layabouts and loungers With bombs up their sleeves Cut-throats and thieves They are not Welcome here We should make them Go back to where they came from They cannot Share our food Share our homes Share our countries Instead let us Build a wall to keep them out It is not okay to say These are people just like us A place should only belong to those who are born there Do not be so stupid to think that The world can be looked at another way (now read from bottom to top) SS St Louis: The ship of Jewish refugees nobody wanted. Image copyright other. Teaching Empathy in the Classroom with Refugee. 1 Second a Day - Syrian Refugee.

My life in the world’s largest refugee camp. News BBC News Navigation Sections. TedED - What does it mean to be a refugee? To learn more about global forced displacement, a good place to start is the website of the UN Refugee Agency (UNHCR). This includes plenty of information and resources; including a basic explanation of the Refugee Convention and an annual report on patterns of forced displacement. The website also looks at individual stories, trying to match the statistical data with more personal accounts of displacement.