Why Gender Equality Stalled. In 1963, most Americans did not yet believe that gender equality was possible or even desirable. 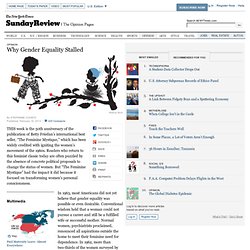 Conventional wisdom held that a woman could not pursue a career and still be a fulfilled wife or successful mother. Normal women, psychiatrists proclaimed, renounced all aspirations outside the home to meet their feminine need for dependence. In 1962, more than two-thirds of the women surveyed by University of Michigan researchers agreed that most important family decisions “should be made by the man of the house.” It was in this context that Friedan set out to transform the attitudes of women. Arguing that “the personal is political,” feminists urged women to challenge the assumption, at work and at home, that women should always be the ones who make the coffee, watch over the children, pick up after men and serve the meals. Why Girls Are Outperforming Boys in School. How "Mean Girls" Summarized a Generation.

If you were a teenage girl in 2004, there’s a strong chance that you saw Mean Girls. 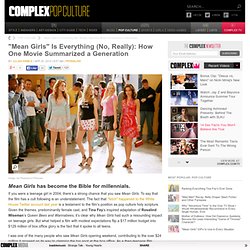 To say that the film has a cult following is an understatement. The fact that "fetch" happened to the White House Twitter account last year is a testament to the film’s position as pop culture holy scripture. Given the themes, predominantly female cast, and Tina Fey’s inspired adaptation of Rosalind Wiseman’s Queen Bees and Wannabees, it’s clear why Mean Girls had such a resounding impact on teenage girls. But what helped a film with modest expectations flip a $17 million budget into $129 million of box office glory is the fact that it spoke to all teens. Gender Is Key to the Bullying Culture. Category: Education, Girls, Violence against Women By Jessie Klein | March 27, 2012 To reduce bullying and its deadly consequences, argues Jessie Klein, author of the "Bully Society," schools must make the gender connection. 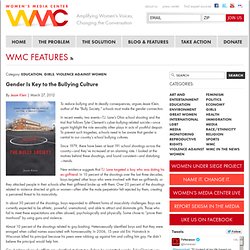 In recent weeks, two events—T.J. Lane’s Ohio school shooting and the trial that follows Tyler Clementi’s cyber-bullying-related suicide—once again highlight the role sexuality often plays in acts of youthful despair. To prevent such tragedies, schools need to be aware that gender is central to our country’s school bullying cultures. Since 1979, there have been at least 191 school shootings across the country—and they’ve increased at an alarming rate. New evidence suggests that T.J. In about 50 percent of the shootings, boys responded to different forms of masculinity challenges.

Almost 10 percent of the shootings related to gay-bashing. I’m an engineer, not a cheerleader. Let’s abandon silly rules about gender roles. Team “Double X” poses at the Brearley School in New York, including, third from right, the author. In the FIRST Robotics Competition teams build and program a robot in six weeks. (October 2013 photo) The woman standing in front of us turned around to face me. “Are you the cheerleaders?” She beamed. Choosing a Pronoun - He, She or Other - After Curfew. Fabrizio Costantini for The New York Times Katy Butler, 16, likes being offered gender choices such as “male, female or other.” 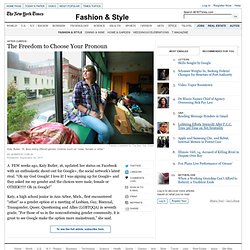 Katy, a high school junior in Ann Arbor, Mich., first encountered “other” as a gender option at a meeting of Lesbian, Gay, Bisexual, Transgender, Queer, Questioning and Allies (LGBTQQA) in seventh grade. “For those of us in the nonconforming gender community, it is great to see Google make the option more mainstream,” she said.

Though Google created the “other” option for privacy reasons rather than as a transgender choice, young supporters of preferred gender pronouns (or P.G.P.’s as they are called) could not help but rejoice. Katy is one of a growing number of high school and college students who are questioning the gender roles society assigns individuals simply because they have been born male or female. P.G.P.’s can change as often as one likes. Stop making our children neutral: let boys and girls play with gender specific toys. 11-Yr-Old Bullied Brony Fighting For Life After Suicide Attempt. 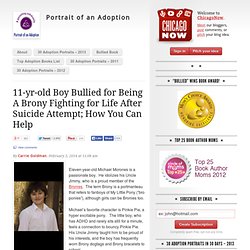 He idolizes his Uncle Jimmy, who is a proud member of the Bronies. The term Brony is a portmanteau that refers to fanboys of My Little Pony (“bro ponies”), although girls can be Bronies too. Michael’s favorite character is Pinkie Pie, a hyper excitable pony. The little boy, who has ADHD and rarely sits still for a minute, feels a connection to bouncy Pinkie Pie. Living Out and Proud : Photo. Tumblr n4h0xlBOzp1t78hlzo1 1280. n4q4gco5ps1qbidswo1_500. Tumblr mkgxpgonN21qghfy5o2 500. Tumblr mkgxpgonN21qghfy5o1 1280. n311krRFto1t0i06oo1_500. Untitled. BChSmTCCAAAvca0. 30 Photos That Challenge the Harmful Stereotypes Toy Companies Sell You.

Many years ago, there was no such thing as girls' and boys' toy aisles. 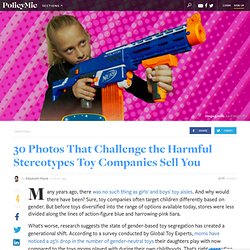 And why would there have been? Sure, toy companies often target children differently based on gender. But before toys diversified into the range of options available today, stores were less divided along the lines of action-figure blue and harrowing-pink tiara. What's worse, research suggests the state of gender-based toy segregation has created a generational shift. According to a survey conducted by Global Toy Experts, moms have noticed a 25% drop in the number of gender-neutral toys their daughters play with now compared to the toys moms played with during their own childhoods.

Image Credit: Let Toys Be Toys For Girls and Boys The problem isn't only gender-specific marketing. "But you don't look queer": students challenge stereotypes with viral campaign (PHOTOS & VIDEO) Childhood Gender Roles In Adult Life. Media's portrayal of gender roles. If Women's Roles In Ads Were Played By Men. Lisa Kudrow in epic speech on sexism in politics (From "Scandal" TV Show) How the Media Failed Women in 2013. The Representation Project: Rewrite the Story.