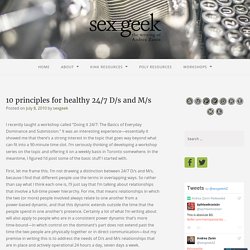 It was an interesting experience—essentially it showed me that there’s a strong interest in the topic that goes way beyond what can fit into a 90-minute time slot. Pink-panthers. SWAAY > Sex Work Activists, Allies, and You. Highly Significant Antiviral Activity of HIV-1 LTR-Specific Tre-Recombinase in Humanized Mice. Abstract Stable integration of HIV proviral DNA into host cell chromosomes, a hallmark and essential feature of the retroviral life cycle, establishes the infection permanently. 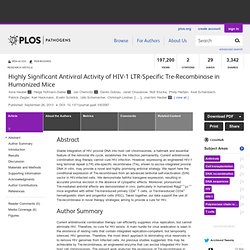 Figures Editor: Jeremy Luban, University of Massachusetts Medical School, United States of America Copyright: © 2013 Hauber et al. Introduction. Researchers fully 'delete' HIV from human cells for the first time. Bee Venom Destroys HIV And Spares Surrounding Cells. HIV may be curable 'within months': Scientists on brink of AIDS vaccine. According to The Telegraph on Thursday, Danish researchers say a cure for human immunodeficiency virus, the virus that causes AIDS, may be within reach. 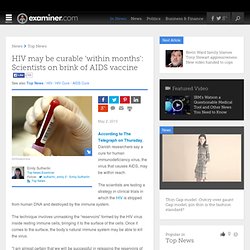 The scientists are testing a strategy in clinical trials in which the HIV is stripped from human DNA and destroyed by the immune system. The technique involves unmasking the “reservoirs” formed by the HIV virus inside resting immune cells, bringing it to the surface of the cells. Once it comes to the surface, the body’s natural immune system may be able to kill the virus. Australian HIV-killing condom available in months. Australian researchers have developed a virus-killing condom, and recent government approval means it's one step closer to hitting the market. 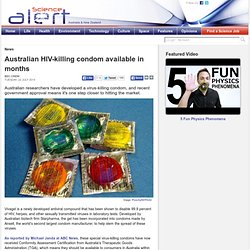 Vivagel is a newly developed antiviral compound that has been shown to disable 99.9 percent of HIV, herpes, and other sexually transmitted viruses in laboratory tests. Developed by Australian biotech firm Starpharma, the gel has been incorporated into condoms made by Ansell, the world’s second largest condom manufacturer, to help stem the spread of these viruses. As reported by Michael Janda at ABC News, these special virus-killing condoms have now received Conformity Assessment Certification from Australia's Therapeutic Goods Administration (TGA), which means they should be available to consumers in Australia within months. A Nanotech-Powered AIDS-Killing Condom Is Closer than Ever. 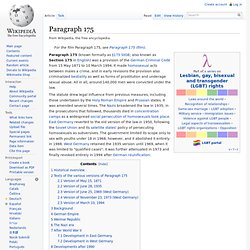 It made homosexual acts between males a crime, and in early revisions the provision also criminalized bestiality as well as forms of prostitution and underage sexual abuse. All in all, around 140,000 men were convicted under the law. The statute drew legal influence from previous measures, including those undertaken by the Holy Roman Empire and Prussian states. It was amended several times. New Sexual Revolution: Polyamory May Be Good for You. On Valentine's Day, images of couples are everywhere. 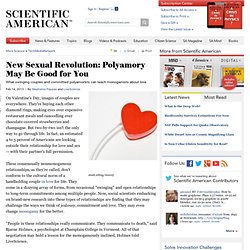 They're buying each other diamond rings, making eyes over expensive restaurant meals and canoodling over chocolate-covered strawberries and champagne. But two-by-two isn't the only way to go through life. In fact, an estimated 4 to 5 percent of Americans are looking outside their relationship for love and sex — with their partner's full permission. 5 Myths About Polyamory Debunked. By Stephanie Pappas, Live Science Contributor | February 14, 2013 10:11am ET Credit: William Perugini, Shutterstock Researchers estimate that as many as 5 percent of Americans are currently in relationships involving consensual nonmonogamy — that is, permission to go outside the couple looking for love or sex. 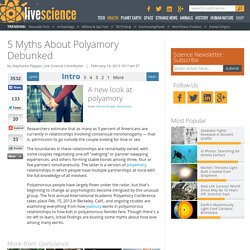 The boundaries in these relationships are remarkably varied, with some couples negotiating one-off "swinging" or partner-swapping experiences. and others forming stable bonds among three, four or five partners simultaneously. Domestic Violence Often Triggered by Jealousy. Episodes of domestic violence are often triggered by sexual jealousy and accusations of infidelity, according to researchers who analyzed jailhouse calls between abusers and their victims. 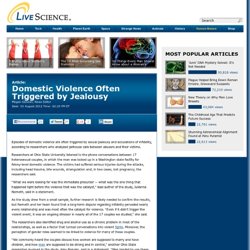 Researchers at Ohio State University listened to the phone conversations between 17 heterosexual couples, in which the man was locked up in a Washington state facility for felony-level domestic violence. The victims had suffered serious injuries during the attacks, including head trauma, bite wounds, strangulation and, in two cases, lost pregnancy, the researchers said. "What we were looking for was the immediate precursor — what was the one thing that happened right before the violence that was the catalyst," lead author of the study, Julianna Nemeth, said in a statement.

The researchers also identified drug and alcohol use as a chronic problem in most of the relationships, as well as a factor that turned conversations into violent fights . The study was published in the Journal of Women's Health.