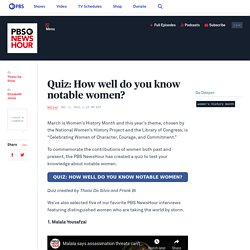 To commemorate the contributions of women both past and present, the PBS NewsHour has created a quiz to test your knowledge about notable women. Quiz created by Thaisi Da Silva and Frank Bi We’ve also selected five of our favorite PBS NewsHour interviews featuring distinguished women who are taking the world by storm. 1. Malala Yousafzai Malala Yousafzai, a Pakistani schoolgirl, became well-known in 2009 when she wrote a series of published diary articles about the right to education, especially for girls. Despite new threats on her life by the Taliban, Yousafzai is not deterred. 2. Judy Woodruff interviewed activist Gloria Steinem about the PBS documentary, “Makers: Women Who Make America” and about the current state of feminism and gender equality. David Schwimmer Made Six Short Films About Sexual Harassment. We Annotate One of Them. Sexual Harassment Resources. You should be able to feel comfortable in your place of work or learning.

If you are being sexually harassed, you can report it to the authorities at your job, school, or local law enforcement. What is Sexual Harassment? Sexual harassment includes unwelcome sexual advances, requests for sexual favors, and other verbal or physical harassment of a sexual nature in the workplace or learning environment, according to the Equal Employment Opportunity Commission (EEOC). Sexual harassment does not always have to be specifically about sexual behavior or directed at a specific person. IgHome - Personalized Homepage. Oprah Winfrey Receives Cecil B. de Mille Award at the 2018 Golden Globes. TAASA - Break The Box. Ideas for Teaching about Gender Stereotypes – FamilyConsumerSciences.com. Lately there’s been a lot of commercials and public service announcements about gender stereotypes. 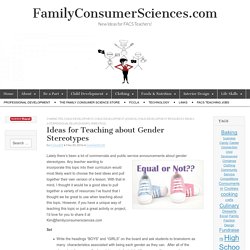 Any teacher wanting to incorporate this topic into their curriculum would most likely want to choose the best ideas and pull together their own version of a lesson. With that in mind, I thought it would be a good idea to pull together a variety of resources I’ve found that I thought we be great to use when teaching about this topic. However, if you have a unique way of teaching this topic or just a great activity or project, I’d love for you to share it at Kim@familyconsumersciences.com Set Write the headings “BOYS” and “GIRLS” on the board and ask students to brainstorm as many characteristics associated with being each gender as they can. Resources. Colin Stokes: How movies teach manhood.

Hear Kids' Honest Opinions on Being a Boy or Girl Around the World. Lesson Exposing Gender Stereotypes. Lesson Exposing Gender Stereotypes. What school dress codes have to do with Harvey Weinstein. But That’s a Girl Book! The more Joseph McIntyre, Ed.M.'10, Ed.D.'17, read to his baby daughter, the more he realized that most of the books were about boys — to the point that he began to switch the genders of main characters. 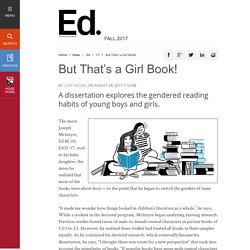 “It made me wonder how things looked in children’s literature as a whole,” he says. While a student in the doctoral program, McIntyre began analyzing existing research. Previous studies found ratios of male-to-female central characters in picture books of 1.5:1 to 2:1. However, he realized these studies had treated all books in their samples equally. As he continued his doctoral research, which eventually became his dissertation, he says, “I thought there was room for a new perspective” that took into account the popularity of books. He was right. “That means that almost four out of every five books that kids read have male central characters,” he says.

McIntyre wanted to take the study one step further and see who was actually reading what. Illustration by Simone Massoni. Why do women live longer than men? Women experience higher stress, more chronic disease, more depression, more anxiety and are more likely to be victims of violence. 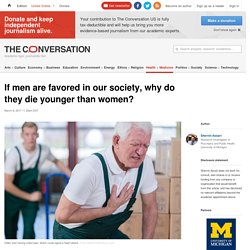 Women earn less than men, and in many countries they don’t have the same human rights as men. Despite the social inequality women experience, they live longer than men. This is the case without a single exception, in all countries. For instance, in the U.S. in 2015 female full-time workers made only 80 cents for every dollar earned by men, indicating a 20 percent gender wage gap. Yet, life expectancy for women in the U.S. is 81.2 years compared to 76.4 for males. Even in countries with larger wage gaps or extreme gender inequalities, women live longer than men.

As a researcher who studies cross-country and gender differences in health, I am always fascinated by how the intersection of these factors influences health. Is it basic biology? Gender refers to social aspects of being a woman or a man such as social stress, opportunity and social expectations. #ThatsHarassment.