Kambo – Kermode Grove. Kambo can either be received in a private session or in a circle-setting with multiple participants. 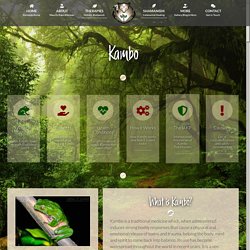 Kambo should only be received from a properly trained practitioner administering and supervising the treatments at all times. A Kambo treatment is intense but fast. The physical effects are immediate and can be uncomfortable, and in most cases involve purging (vomiting). Therefore, before a Kambo treatment you will need to fast for at least 6 hours so as not to have any food in the stomach, then right before the beginning of the treatment you will be asked to drink a large amount of water, which will act as a carrier for the purging. Not every Kambo treatment is necessarily unpleasant however, and certainly no two treatments are ever the same. How Kambo’s Physical and Spiritual Properties Reduce Pain and Treat Addiction. When US Attorney General Dr. 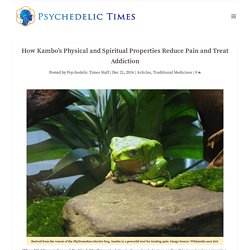 Vivek Murthy sent a letter to the nation’s doctors earlier this year issuing a warning about how they prescribe drugs, it was a clear “wake up call” moment in our country’s ongoing opiate crisis. In the letter, Murthy warned that the US’s opioid epidemic was rooted in doctors’ overzealous prescription habits, saying that “many of us were taught—incorrectly—that opioids are not addictive when prescribed for legitimate pain. The results have been devastating.”

Murthy’s call for greater safety precautions when prescribing painkillers is echoed in the increasing efforts of many people to cut back on prescription drugs with dubious side effects and find safer alternatives. If you’re well versed in the realm of psychedelic substances and the visionary effects of the Bufo frog’s 5-MeO-DMT secretions, frog venom won’t seem too strange of a source for therapy. Home – Kermode Grove. 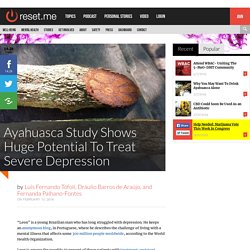 He keeps an anonymous blog, in Portuguese, where he describes the challenge of living with a mental illness that affects some 300 million people worldwide, according to the World Health Organization. Leon is among the roughly 30 percent of those patients with treatment-resistant depression. Available antidepressant drugs like selective serotonin reuptake inhibitors do not alleviate his depressed mood, fatigue, anxiety, low self-esteem and suicidal thoughts. A new study may offer hope for Leon and others like him. Our team of Brazilian scientists has conducted the first randomized, placebo-controlled clinical trial of ayahuasca—a psychedelic drink made of Amazonian plants.

The New and Ancient Psychedelic Revolution: Preparing the Way for the New Story of Humanity - Psychedelic Times. These Ontario police officers are using ayahuasca to treat their PTSD. As a constable with the Ontario Provincial Police, Matt Chorny regularly responded to car accidents. 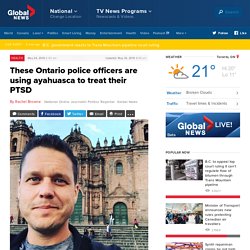 He often dealt with victims and family members throughout the entire process, from the crash to the morgue. Over time, such incidents took an emotional toll. These days, he’s coping with the help of a surprising source — ayahuasca. Chorny’s embrace of the hallucinogenic brew, which is illegal in Canada, is a recent revelation. For many years, Chorny suffered from the trauma that came from his work, which frequently included responding to sexual assaults and other violent crimes. “The worst is when people die in your arms,” Chorny told Global News. Kambô: Nature's Vaccine For The Mind And Body. “Kambô circulates in the heart. 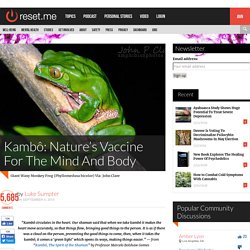 Our shaman said that when we take kambô it makes the heart move accurately, so that things flow, bringing good things to the person. It is as if there was a cloud on the person, preventing the good things to come, then, when it takes the kambô; it comes a ‘green light’ which opens its ways, making things easier.” — from “Kambô, The Spirit of the Shaman” by Professor Marcelo Bolshaw Gomes. Psychedelic Integration Guide for Bufo & 5-MeO-DMT. Integration refers to the process of assimilating the mind, body, and spirit after an entheogenic experience for the purpose of well-being and growth. 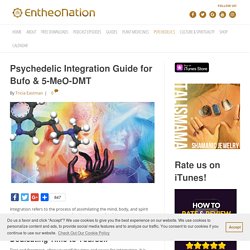 This process involves extracting meaning from your experience and applying any downloads or insights you receive into your life. Dedicating Time to Yourself First and foremost, allow yourself the time and space for integration. It is easy to get swept into the busyness of our daily routines and not give ourselves time to rest, reflect, and engage in new practices. Mapping Medicine. Rapé [“ha-peh” – in Brasil] is a snuff that various South American indigenous tribes use. 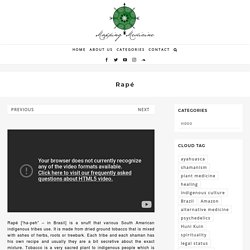 It is made from dried ground tobacco that is mixed with ashes of herbs, roots or treebark. Each tribe and each shaman has his own recipe and usually they are a bit secretive about the exact mixture. Reflections on Ayahuasca, Psychedelics, Marijuana, and a critical look at the Psychedelic Movement - Piercing the Veil of Reality. AYAHUASCA: Into The Dark Abyss. #124: don Howard Lawler. 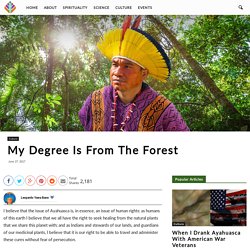 He left the Amazon to better learn how to lead his people through our modern times and has been traveling the world leading healing ceremonies for the last 10 years. Stream Ayahuasca Documentary – Aubrey Marcus. Kambo Alchemy. Millennials on Spirit Quests Are Ruining Everything About Ayahuasca - Motherboard. Meeting The Tobacco Spirit. Many of those discovering Ayahuasca in the western world aren’t really aware that it is actually part of a wider Amazonian practice of plant based healing. 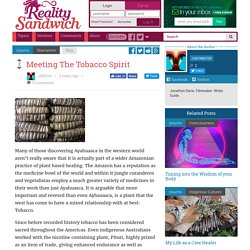 The Amazon has a reputation as the medicine bowl of the world and within it jungle curanderos and vegetalistas employ a much greater variety of medicines in their work than just Ayahuasca. It is arguable that more important and revered than even Ayhauasca, is a plant that the west has come to have a mixed relationship with at best: Tobacco.

Since before recorded history tobacco has been considered sacred throughout the Americas. Kratom - Mitragyna speciosa Korthals. Master Practitioner of Kambo. Erowid. Effects - Kratom. Kratom has a strong effect on your anxiety, mood and energy levels.

It lowers your anxiety level, while the feeling has been described as happy, strong, and active, with a strong desire to do work. The mind is described as calm. Thai workers use it to get through a hard day of work. Effects come on within five to ten minutes after use, and can last for several hours. Most people describe the effects as stimulating and euphoric at lower doses, becoming sedative at higher doses. Although the most important alkaloids are related to psychedelic substances, there appears to be no psychedelic activity. There are some sources that suggest Kratom (like opiates) stimulates desire in women and reduces erectile problems in men.

Acute possible negative effects include dry mouth, increased urination, loss of appetite, and constipation. There are several types of kratom available, and new strains seem to appear on the market frequently. Tree of Light Retreats - Women's & Mixed Ayahuasca Retreats - Home. Does Poison from Tree Frogs Help with Depression, Anxiety & Addiction? Could a frog poison help with some serious health issues or does it cause more problems than it treats?

The Art Of Smudging - A Shamanic Cleansing Ritual - The Sacred Science. If you grew up religious, you probably witnessed the ritualistic use of smoke in ceremony. For me it was frankincense and myrhh being burned during Sunday mass. For others it might be smoldering incense at their Buddhist Temple, or the spiraling tendrils of bukhoor in a mosque. There is something primordial within us that connects smoke with spirituality. In Native American tradition, it’s seen as a bridge to the higher realms, a way to bring in good spirits and dispel the negative or stagnant ones. What is Rapé - Katukina - Rapé, Tsunu, Sananga, Piri-Piri, Incenses, Shamanic Tools & Visionary Artforms. What is SNUFF – RAPÉ ? Rapé is legal sacred ​shamanic snuff medicine, which is pronounced ‘ha-peh’ in English. Also, it’s known to be casually referred to as ‘hape’, ‘hapi’ or ‘rapay” by some Western people. They are very rare, sacred, powerful, precious, profoundly healing and cleansing miracle medicines.

They are made in a very sacred and labour intensive process, and consist of various Amazonian medicinal plants, trees, leaves, seeds, and other sacred ingredients. Some types of rapé are made by various indigenous tribes, who originate from different South American countries – primarily Brazil and Peru. Traditionally, they are applied by using a pipe made from bamboo or bone, which is blown through each nostril on both sides.