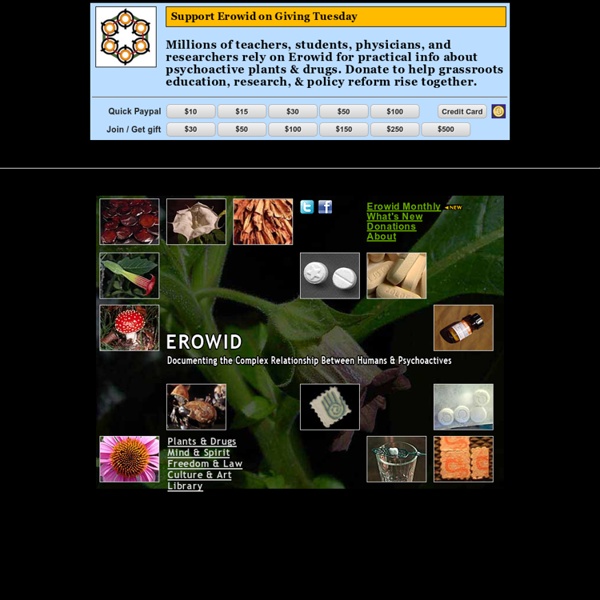 Terence McKenna Vault Terence McKenna was a psychedelic author, explorer, and showman. He was born in 1946 and grew up in Paonia, Colorado. In high school he moved to Los Altos, California, and from there attended U.C. Berkeley for two years before setting off to see the world. He travelled widely in Europe, Asia, and South America during his college years. His first book, co-authored with his brother Dennis McKenna, was based on their 1971 investigations of Amazonian hallucinogens.

The World Factbook The Office of Public Affairs (OPA) is the single point of contact for all inquiries about the Central Intelligence Agency (CIA). We read every letter, fax, or e-mail we receive, and we will convey your comments to CIA officials outside OPA as appropriate. However, with limited staff and resources, we simply cannot respond to all who write to us. What foods and drugs need to be avoided? Posted by admin on Thursday, February 28, 2008 · 51 Comments What foods need to be avoided? Basically foods that are aged, preserved, dried, fermented, pickled, cured (meats), rancid, old, outdated, overripe, or even slightly spoiled. The following foods are recommended to be avoided with MAOIs:

Ethiopian kids hack OLPCs in 5 months with zero instruction What happens if you give a thousand Motorola Zoom tablet PCs to Ethiopian kids who have never even seen a printed word? Within five months, they'll start teaching themselves English while circumventing the security on your OS to customize settings and activate disabled hardware. Whoa. The Ibogaine Story "I have seen the best minds of my genertion, starving, hysterical, naked, Dragging themselves through negro streets at dawn, looking for an angry fix..." --Allen Ginsberg, the opening lines, HOWL; 1954 "What we're looking for is something wecan spray over theSoviet trenches, and they'll march out whistling 'Yankee Doodle Dandy'." Dimethyltryptamine (DMT) Dimethyltryptamine (DMT) is a potent psychedelic compound that is found within many plants and mammals, including humans. It is used as a recreational drug to induce near death, mystical, spiritual and other-worldly experiences. It has been outlawed all over the world. In the United States DMT is classed as a Schedule 1 drug under the Controlled Substances Act of 1970, and in the UK it is listed as a Class A drug. One exception in the US is the Santo Daime church, who won the right to ingest ayahuasca, an ancient tea that when brewed forms active DMT, as part of their religious practices. In his widely received book DMT The Spirit Molecule Dr.

Seeing Theory Seeing Theory is a project designed and created by Daniel Kunin with support from Brown University's Royce Fellowship Program. The goal of the project is to make statistics more accessible to a wider range of students through interactive visualizations. Statistics is quickly becoming the most important and multi-disciplinary field of mathematics. According to the American Statistical Association, "statistician" is one of the top ten fastest-growing occupations and statistics is one of the fastest-growing bachelor degrees. Statistical literacy is essential to our data driven society.

Manual for Ibogaine Therapy "Regarding the manual I would disagree with some of the exclusion criteria," says one author. "By excluding patients that are depressed or bipolar you exclude a sizable portion of the addict population. Because ibogaine's metabolites have been shown to have an antidepressant effect it would probably help these patients. How to Grow Calea Zacatechichi from Seeds and Cuttings « worldseedsupply.org Calea zacatechichi is the most well-known of several dreaming herbs that make up the class known as oneirogens. Other dreaming herbs include Silene Capensis (African Dream Root), Entada Rheedii and Artemisia Vulgaris (Mugwort). Dream herbs are used to induce lucid dreaming, which, most accurately is described as an awareness that you are dreaming to the point that you can control dreams. But, on a more basic level, dream herbs also seem to be linked to increased dream recall or simply an awareness that you are dreaming even if you cannot control the dream. There are also a number of other herbs, particularly sedative herbs, which seem to cause increased dream activity in various users without them being specifically labeled as dream herbs. Mad Dog Skullcap, California Poppy, Lavender, German Chamomile and Agrimony are among these.

Incredible site - I have a posting under: experiences/amanita muscaria by martinowle Jan 9

It is indeed! Erowid has been a valuable resource for me for years... by energenetic1111 Oct 31

Documenting the Complex Relationship Between Humans by mojojuju Dec 21