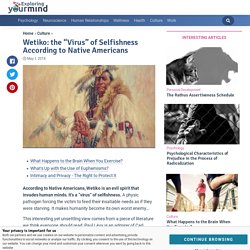 It’s a “virus” of selfishness. A physic pathogen forcing the victim to feed their insatiable needs as if they were starving. It makes humanity become its own worst enemy… This interesting yet unsettling view comes from a piece of literature we think everyone should read. Paul Lévy is an admirer of Carl Jung’s legacy and a regular columnist for “The Guardian”. Wetiko is a word that Native Americans use to designate an evil person who never worries about the well-being of others. The legacy Levy wished to leave with his book is not at all negative, reproachful, or alarming. Let’s dive into the idea now… Wetiko, human selfishness, and Carl Jung’s concept of Shadow Jack Forbes is a historian who explained something very interesting in his book Colombus and Other Cannibals. Thus, common things like jealousy, greed, thirst for power, and selfishness are actually products of our collective unconscious.

Healing Teacher Plants & Animals. A Shaman Shares A Spiritual View of Mental Illness. Shamans Believe Mental Illness Is Something Else Entirely. A West African shaman by the name of Dr. 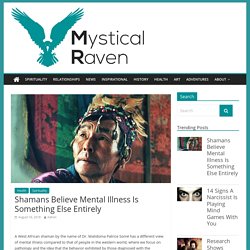 Malidoma Patrice Somé has a different view of mental illness compared to that of people in the western world, where we focus on pathology and the idea that the behavior exhibited by those diagnosed with the condition is something that needs to stop. Dr. Somé proposes that what we call depression, bi-polar, psychosis and schizophrenia may perhaps be a remarkable transformation in consciousness and an inevitable step towards human development. Dr. Somé and the Dagara people support the shamanic view that signals mental illness as “the birth of a healer.” “Mental disorder, behavioural disorder of all kinds, signal the fact that two obviously incompatible energies have merged into the same field,” says Dr.

Upon Dr. “So this is how the healers who are attempting to be born are treated in this culture. Shamanism: 7 Keys to Understanding & Practicing Shamanism. Crow Medicine: What Crow (Keeper Of All Sacred Law) Can Teach Us. Crow is the left-handed guardian. 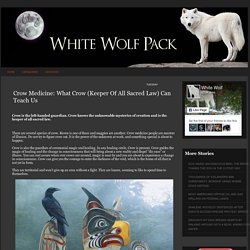 Crow knows the unknowable mysteries of creation and is the keeper of all sacred law. There are several species of crow. Raven is one of these and magpies are another. Crow medicine people are masters of illusion. Do not try to figure crow out. Crow is also the guardian of ceremonial magic and healing. They are territorial and won't give up an area without a fight. If you have a crow as a totem, you need to be willing to walk your talk and speak your truth. Crows are the bringer of messages from the spirit world, and is thought to dwell beyond the realm of time and space. Welkom bij Big Dipper. An Indigenous Approach to Healing Trauma. People have always experienced pain, and in the vast span of time before the colonial expansion of western culture, indigenous cultures weren’t without their methods of dealing with trauma. 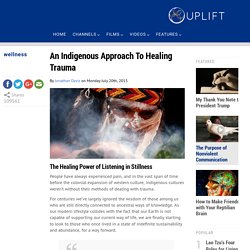 For centuries we’ve largely ignored the wisdom of those among us who are still directly connected to ancestral ways of knowledge. As our modern lifestyle collides with the fact that our Earth is not capable of supporting our current way of life, we are finally starting to look to those who once lived in a state of indefinite sustainability and abundance, for a way forward. “In order to have sustainable community you have to make sure the people are sustainable. This means healing trauma.” – Jarmbi Githabul, Narakwal / Githabul Custodian What is Dadirri? “Dadirri is inner, deep listening and quiet, still awareness. When Miriam-Rose Ungunmerr-Baumann speaks of dadirri, she speaks of a form of deep, contemplative listening that is nothing less than a personal spiritual practice.

Emotional Completion. How Shamans Dream the World into Being ~ We are what we think. 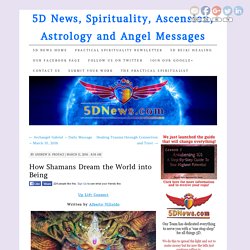 Everything we are arises from our thoughts. With our thinking we create the world. . – Buddha Whether you realize it or not, we are all dreaming the world into being. Not the sleeping dream… but the waking dream The only way to end this dreadful reality is to awaken to the fact that it, too, is a dream, and recognize our ability to write a better story, one that the universe will work with us to manifest.