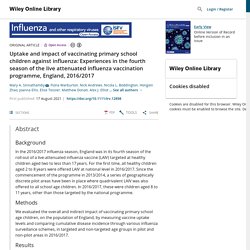 This annual programme aimed to protect children against infection and indirectly protect those in other age groups, in particular those who are at higher risk of severe disease.1, 2 The Joint Committee on Vaccination and Immunisation (JCVI) made the recommendation to implement the programme based on a range of evidence, including an analysis of the burden of influenza by age group3 and mathematical modelling predicting the reduction of the burden of influenza and its future benefits, alongside an economic evaluation.4.

Influenza Vaccination and Respiratory Virus Interference Among Department of Defense Personnel During the 2017-2018 Influenza Season - PubMed. Purpose: Receiving influenza vaccination may increase the risk of other respiratory viruses, a phenomenon known as virus interference. 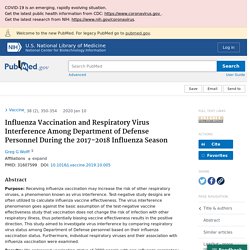 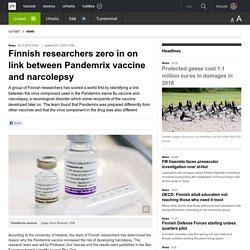 The research team was led by Professor Outi Vaarala and the results were published in the San Francisco-based scientific journal Plos One. According to the publication, the researchers found that among other things the Pandemrix drug – which has been linked to cases of narcolepsy developed following vaccination – had higher levels of structurally altered viral nucleoprotein than in Arepanrix. Both were drugs approved for immunisation against the H1N1 influenza. “The vaccine virus itself has components of the virus. It is also supposed to contain viral protein. “However what is more significant is that given that there were two pandemic vaccines against swine flu – one was Arepanrix, which was used in Canada, and the other was Pandemrix, which was used in Europe – Pandemrix caused narcolepsy. Childhood immune imprinting to influenza A shapes birth year-specific risk during seasonal H1N1 and H3N2 epidemics.

Abstract Across decades of co-circulation in humans, influenza A subtypes H1N1 and H3N2 have caused seasonal epidemics characterized by different age distributions of cases and mortality. 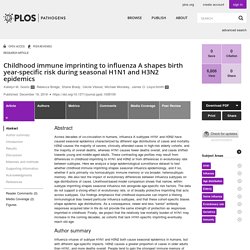 H3N2 causes the majority of severe, clinically attended cases in high-risk elderly cohorts, and the majority of overall deaths, whereas H1N1 causes fewer deaths overall, and cases shifted towards young and middle-aged adults. These contrasting age profiles may result from differences in childhood imprinting to H1N1 and H3N2 or from differences in evolutionary rate between subtypes.

Here we analyze a large epidemiological surveillance dataset to test whether childhood immune imprinting shapes seasonal influenza epidemiology, and if so, whether it acts primarily via homosubtypic immune memory or via broader, heterosubtypic memory. Clinical Infectious Diseases. Pandemrix vaccine: why was the public not told of early warning signs?

Peter Doshi asks what this means for the future of transparency during public health emergencies In October 2009, the US National Institutes of Health infectious diseases chief, Anthony Fauci, appeared on YouTube to reassure Americans about the safety of the “swine flu” vaccine. “The track record for serious adverse events is very good. It’s very, very, very rare that you ever see anything that’s associated with the vaccine that’s a serious event,”1 he said. Four months earlier, the World Health Organization had declared H1N1 influenza a pandemic, and by October 2009 the new vaccines were being rolled out across the world.

Except, it hadn’t. “Faced with an emerging pandemic of unknown severity, the process was initiated. Diseases with Unknown Etiology Trace Back to Mass Vaccination Against Influenza in 1976. February 08, 2018 By James Lyons-Weiler, Ph.D. 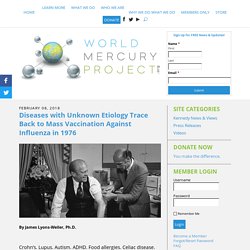 Crohn’s. Lupus. Autism. ADHD. As an observer and participant in modern biomedical research, and a lover of deep history, I tend to focus not on the immediate or last few years, but look for trends of accumulating risk over longer periods of time. Looking at a trend of topics per year, one has to correct for some estimate of the total number of articles published, because a mere count would, in part, reflect the overall trend in the explosion of total articles published. 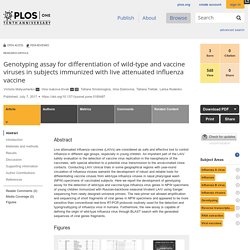 An important part of the LAIV safety evaluation is the detection of vaccine virus replication in the nasopharynx of the vaccinees, with special attention to a potential virus transmission to the unvaccinated close contacts. Conducting LAIV clinical trials in some geographical regions with year-round circulation of influenza viruses warrants the development of robust and reliable tools for differentiating vaccine viruses from wild-type influenza viruses in nasal pharyngeal wash (NPW) specimens of vaccinated subjects.

Here we report the development of genotyping assay for the detection of wild-type and vaccine-type influenza virus genes in NPW specimens of young children immunized with Russian-backbone seasonal trivalent LAIV using Sanger sequencing from newly designed universal primers. Introduction Materials and methods. Increased Risk of Noninfluenza Respiratory Virus Infections Associated With Receipt of Inactivated Influenza Vaccine. We use cookies to enhance your experience on our website. 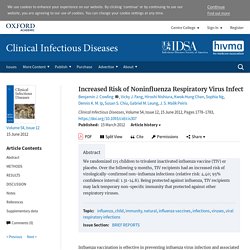 Increased Risk of Noninfluenza Respiratory Virus Infections Associated With Receipt of Inactivated Influenza Vaccine. Potential Consequences of Not Using Live Attenuated Influenza Vaccine. - PubMed - NCBI. Virus nhs winter flu injection mutated ineffective ill. The medicine’s ineffectiveness means thousands of people across the UK could be at risk from the virus as the “Aussie flu” hits the nation over the few months. 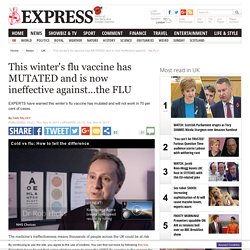 Scientists have found that using chicken eggs to grow the H3N2 flu vaccine is the reason for the jab’s failure. Scott Hensley, from the University of Pennsylvania, said: “Current H3N2 viruses do not grow well in chicken eggs, and it is impossible to grow these viruses in eggs without adaptive mutations.” The medicine mutates inside the chicken eggs making the antibiotic ineffective in the human body. The scientist added: “The 2017 vaccine that people are getting now has the same H3N2 strain as the 2016 vaccine so this could be another difficult year if this season is dominated by H3N2 viruses again.”

Johns Hopkins Researcher Releases Shocking Report On Flu Vaccines. In 2015, a whole new slew of flu vaccines found themselves getting approved by the Federal Drug Administration. 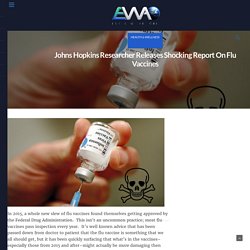 This isn’t an uncommon practice; most flu vaccines pass inspection every year. It’s well known advice that has been passed down from doctor to patient that the flu vaccine is something that we all should get, but it has been quickly surfacing that what’s in the vaccines–especially those from 2015 and after–might actually be more damaging then simply rolling the dice on getting the flu. The ingredient that is getting the most flack is called an adjuvant. The particular one involved is called Squalene, and it has been linked to auto-immune disease side effects. In fact, it may have been used during chemical attacks in the Gulf War. While it may be a contested subject, it remains that we aren’t really sure what’s going into these vaccines we’re being convinced should be used. Here is an excerpt from yournewswire.com that summarizes aspects of Peter Doshi’s report. The Flu Virus. Influenza - The Virus and It’s Effect Three Types “There are three types of influenza viruses: A, B and C.

Flu Vaccine for All: A Critical Look at the Evidence. Influenza Infection and Vaccination During Pregnancy and Risk of Autism. Question Is there an association between maternal influenza infection and vaccination and autism risk? Findings In a cohort study of 196 929 children, of whom 3103 had austism spectrum disorder, maternal influenza infection during pregnancy was not associated with increased autism risk.

There was a suggestion of increased risk of autism spectrum disorders among children whose mothers received an influenza vaccination during their first trimester, but the association was statistically insignificant after adjusting for multiple comparisons, indicating that the finding could be due to chance. Meaning Our findings do not call for vaccine policy or practice changes but do suggest the need for additional studies. Importance Maternal infections and fever during pregnancy are associated with increased risk for autism spectrum disorders (ASDs).

To our knowledge, no study has investigated the association between influenza vaccination during pregnancy and ASD. Autism Spectrum Disorders. Studies Find Flu Shots Can Harm Your Heart, Infant And Fetus. 1918 Spanish Flu Was Caused By Vaccinations, Shocking Report. Shortly after the First World War, vaccine makers had an excess supply of vaccines (originally intended for soldiers to treat yellow fever), as a result of the relatively unexpected short duration of the war. A huge vaccination campaign was drummed up to vaccinate the population against “foreign illnesses” the troops were returning with. The vaccines administered to most of the population made people extremely ill with cases of high fever, extreme weakness, abdominal rash, and intestinal disturbances characteristic of typhoid, to name but a few symptoms. In order to treat these symptoms pharmaceutical companies and doctors developed stronger vaccines to treat the symptoms of the previous ones.

Shedding of Ann Arbor strain live attenuated influenza vaccine virus in children 6-59 months of age. Inflammatory responses to trivalent influenza virus vaccine among pregnant women. Exclusive: The Spanish Influenza Epidemic Of 1918 Was Caused By Vaccinations. 6.43k Shares As has been stated before, all medical and non-medical authorities on vaccination agree that vaccines are designed to cause a mild case of the diseases they are supposed to prevent. But they also know and admit that there is no way whatsoever to predict whether the case will be mild or severe – even deadly. With this much uncertainty in dealing with the very lives of people, it is very unscientific and extremely dangerous to use such a questionable procedure as vaccination. Many vaccines also cause other diseases besides the one for which they are given.

For instance, smallpox vaccine often causes syphilis, paralysis, leprosy, and cancer. When several shots are given (different vaccines) within a few days or a few weeks apart, they often trigger intensified cases of all the diseases at once, because the body cannot handle such a large amount of deadly poison being injected directly into the bloodstream. FDA cites GSK flu vaccine plant for quality violations.

The year's flu vaccine effective in only 3% of cases. Narcolepsy cases linked to flu vaccine subject to new compensation dispute. Government lawyers are seeking to block compensation payments to people who developed the devastating sleep disorder, narcolepsy, as a result of a faulty swine flu vaccine. The Pandemrix vaccine made by GlaxoSmithKline (GSK) was given to 6 million people in Britain and millions more across Europe during the 2009-10 swine flu pandemic, but was withdrawn when doctors noticed a rise in narcolepsy cases among those who received the jab. In June, a 12-year-old boy was awarded £120,000 by a court that ruled he had been left severely disabled by narcolepsy caused by Pandemrix.

The win ended a three-year battle with the government that argued his illness was not serious enough to warrant compensation. If Vaccines Don’t Cause Brain Damage, Why Is GlaxoSmithKline Paying Out $63 Million to Vaccine Victims? Since the swine flu panic that was widespread in 2009, prompting more than 60 million people to get vaccinated against it, countless amounts of individuals – predominantly children – have developed a range of health conditions. Mainly, brain damage has been the issue; everything from sleep disturbances and memory impairments to hallucinations and mental illness have been experienced by those who received the swine flu vaccine. Zjv11995. Impact of Influenza Vaccination on Seasonal Mortality in the US Elderly Population.

Johns Hopkins Scientist Reveals Shocking Report on Flu Vaccines. Swine flu jab and narcolepsy may be linked by autoimmune response. Scientists appear close to pinpointing why a swine flu vaccine given to six million people in Britain triggered the devastating sleep disorder, narcolepsy, in rare cases. The Pandemrix vaccine, made by GlaxoSmithKline (GSK), and which was recommended by the UK government to high-risk groups during the 2009-10 swine flu pandemic, was withdrawn after medical records showed a spike in the number of cases of narcolepsy presenting in doctors’ surgeries. But until now it has not been clear why the jab caused the chronic illness, which involves uncontrollable daytime sleepiness, in around one in 55,000 recipients.

Is Pertussis Vaccine Effective or Not? Vax or Get Fired? How to Prepare for Forced Vaccination. Science of Vaccine Damage. A review on the association between inf - PubMed Mobile. Aluminum excytotoxicity and neuroautoto - PubMed Mobile. Vaccines to prevent influenza in healthy adults. Pertussis. Why You Should Never Get A Flu Shot. Vaccination: Your Body. Your Baby. Their Flu. A Shot Never Worth Taking: The Flu Vaccine ~ by Kelly Brogan, MD.