Nurses Against Vaccines. Untitled. Are You Talking to Me? Cause the CDC heard you - BolenReport. K Paul Stoller, MD www.incurable-me.com Well, it finally happened. 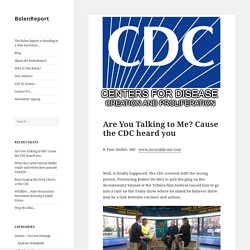 The CDC screwed with the wrong person. Harvard PhD Immunologist Destroys SB277's Logic With Open Letter to Legislators - Truth Kings. SB277 is the rule of law in California. 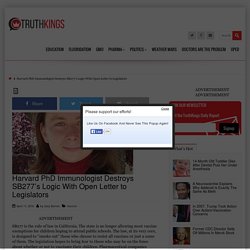 The state is no longer allowing most vaccine exemptions for children hoping to attend public schools. The law, at its very core, is designed to “smoke out” those who choose to resist all vaccines or just a some of them. The legislation hopes to bring fear to those who may be on the fence about whether or not to vaccinate their children. Pharmaceutical companies backed the bill which they hope keeps revenue flowing by keeping people “in compliance.” What Most People Don't Know About The Father of Vaccination and Why History is Repeating Itself. Dave Mihalovic, Prevent DiseaseWaking Times For centuries, medical practitioners we have tried to find ways of inducing immunity in order to escape the consequences of disease, but vaccination itself is relatively new and a mere blip on our historical timeline. 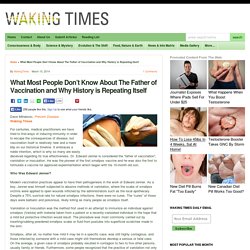 It embraces a noble intention, which is why so many are easily deceived regarding its true effectiveness. Dr. 200 Evidence-Based Reasons NOT To Vaccinate. Vaccines Mandated, Child Dies from Vaccinations; True Freedom News with Nathan Crane (Ep.003) 25 Rules for Medical Propagandists and Vaccine Disinfo Agents. Marco Torres, Prevent DiseaseWaking Times Propagandists Have Infiltrated Every Segment of Academia and Social Media To Confuse Consumers Who Seek Accurate Information About Health The long anticipated cultural war over vaccines initiated by governments on behalf of the pharmaceutical industrial complex is steadily increasing in intensity. 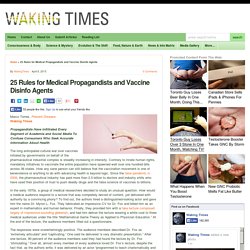 Contrary to innate human rights, mandatory initiatives to vaccinate the entire population have spawned well over one hundred bills across 36 states. How any sane person can still believe that the vaccination movement is one of benevolence or anything to do with advancing health is beyond logic. Since the false pandemic in 2009, the pharmaceutical industry has paid more than 2.5 billion to doctors and industry shills who have used their position of trust to push deadly drugs and the false science of vaccines to billions.

In the early 1970s, a group of medical researchers decided to study an unusual question. Johns Hopkins Scientist Reveals Shocking Report on Flu Vaccines. By SYLVIA BOOTH HUBBARD A Johns Hopkins scientist has issued a blistering report on influenza vaccines in the British Medical Journal (BMJ). 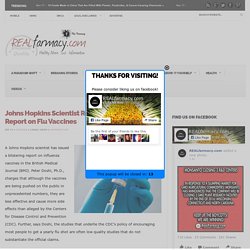 Peter Doshi, Ph.D., charges that although the vaccines are being pushed on the public in unprecedented numbers, they are less effective and cause more side effects than alleged by the Centers for Disease Control and Prevention (CDC). Further, says Doshi, the studies that underlie the CDC’s policy of encouraging most people to get a yearly flu shot are often low quality studies that do not substantiate the official claims. Promoting influenza vaccines is one of the most visible and aggressive public health policies in the United States, says Doshi of the Johns Hopkins School of Medicine.

Drug companies and public officials press for widespread vaccination each fall, offering vaccinations in drugstores and supermarkets. Although the CDC implies that flu vaccines are safe and there’s no need to weigh benefits against risk, Doshi disagrees. Share: Doctors Against Vaccines: The Other Side of the Story is Not Being Told. Health Impact News Editor Comments: 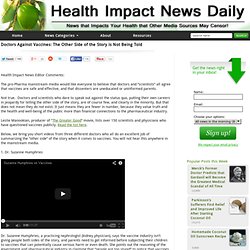 » 22 Medical Studies That Show Vaccines Can Cause Autism. Arjun WaliaActivist Post Concerns regarding vaccinations continue to increase exponentially in light of all of the information and documentation that has surfaced over the past few years. 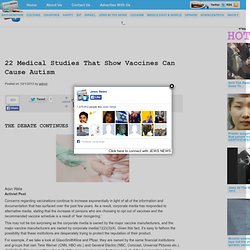 As a result, corporate media has responded to alternative media, stating that the increase of persons who are choosing to opt out of vaccines and the recommended vaccine schedule is a result of ‘fear mongering.’ This may not be too surprising as the corporate media is owned by the major vaccine manufacturers, and the major vaccine manufacturers are owned by corporate media(1)(2)(3)(4). Given this fact, it’s easy to fathom the possibility that these institutions are desperately trying to protect the reputation of their product. Vaccines and Autism, Both Sides of The Coin. Groundbreaking Stanford University study challenges established vaccine dogma (Video) - Miami healthy living. INFORMED CHOICE - Cocktail. Suzanne Humphries, MD. 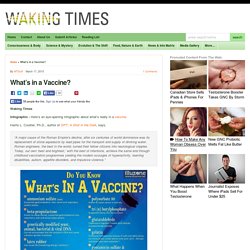 Waking Times Infographic - Here’s an eye-opening infographic about what’s really in a vaccine. Harris L. Coultier, Ph.D., author of DPT: A Shot in the Dark, says, The Vaccine Culture War in America: Are You Ready? Barbara Loe Fisher, MercolaWaking Times More than 1.2 million people in the United States are infected with HIV1 but government officials do not ban HIV infected children and adults from attending school, receiving medical care, being employed, or otherwise participating in society. 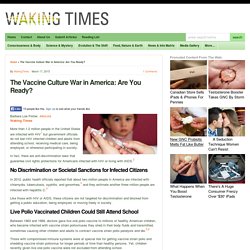 In fact, there are anti-discrimination laws that guarantee civil rights protections for Americans infected with HIV or living with AIDS.2 No Discrimination or Societal Sanctions for Infected Citizens In 2012, public health officials reported that about two million people in America are infected with chlamydia, tuberculosis, syphilis, and gonorrhea,3 and they estimate another three million people are infected with hepatitis C.4 Like those with HIV or AIDS, these citizens are not targeted for discrimination and blocked from getting a public education, being employed, or moving freely in society. 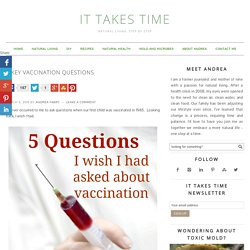 Looking back, I wish I had. All nine of our children were vaccinated according to the vaccine schedule required at the time.